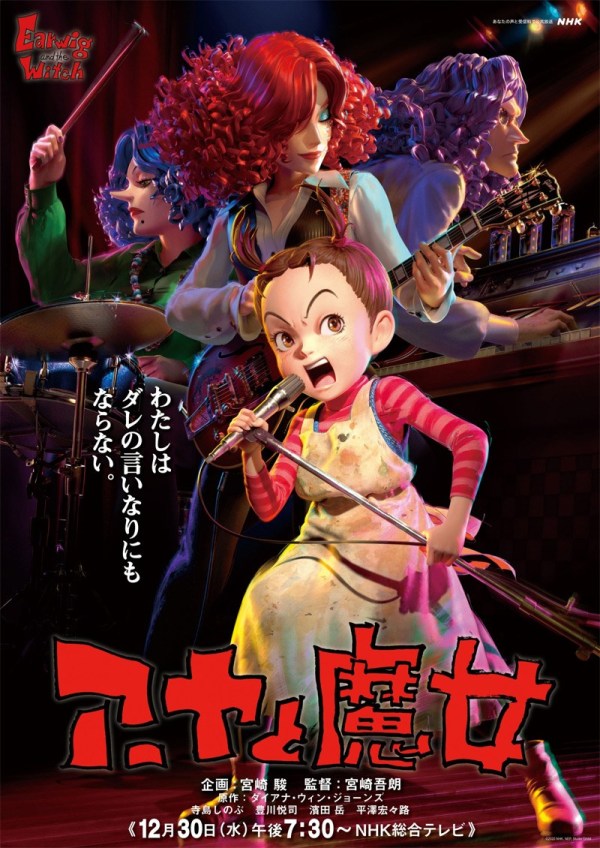 The music is, for want of a better word, perfect. Far from a classical film score, this is much more upbeat and contemporary. The original progressive rock songs (another departure for Ghibli) also add an ethereal feel to the film and are used at just the right points and add a layer of depth in conjunction with some character development.

Earwig is the first real attempt to depart from Ghibli’s hand-drawn style and it’s essential to approach it as such. Plenty of reviews bemoan that it fails to live up to Ghibli’s best, but that is an improper viewpoint to take because the film purposefully avoids such comparisons.

The film is a brave step into the unknown and what happens next is very much up for debate, but Earwig is a film that is worth seeking out and watching more than once.
The characters themselves are an interesting bunch. Earwig is perhaps the most clear cut as a young, precocious girl who’s used to getting her way and is thrust into a situation where she does not. The Mandrake and Bella on the other hand, are far murkier and it is with the former that we see a lot of development over the course of the film. Thomas the cat is frustratingly plain. His role isn’t major and he serves as catalyst but not much else.
Before we begin, I have to state that I actually like Goro Miyazaki’s previous films including Tales from Earthsea. I find he’s a perfectly competent director who’s suffered from a series of unfortunate circumstances least of which is being the son of perhaps one of the greatest filmmakers of all time.

Earwig and the Witch

The animation has come in for a lot of criticism that is, in my opinion, unwarranted and unfair. It is not Pixar quality, but then this isn’t a Pixar film and it wasn’t made with Pixar’s crews who have hundreds of years of experience between them, or Pixar’s hundreds of millions of dollars either. Indeed, the ‘Making of’ featurette shows a rather young but dedicated crew working with off the shelf software. When you see past the rough edges, the animation is actually quite well done. If you like silly faces you’re in for a treat. It’s perhaps a conscious decision to make the characters less detailed lest some uncanny valley creep in. Adults may notice this, but kids won’t bat an eye. If you can focus on what the characters are doing as opposed to how they’re doing it, you’ll be rewarded.

As I said above, you have to approach this film as a clean slate or you will be disappointed. The crew strike out on a different path from previous Ghibli films and tell a pretty straightforward story in a straightforward manner. There aren’t many higher themes or deeper meanings but that isn’t to say that there aren’t any takeaways either.

Controversy, confusion, bemusement. Which word describes the latest film from Studio Ghilbi? Earwig and the Witch marks a bold departure for the Japanese studio that’s ruffled a few feathers but is actually quite a sweet film.

Earwig and the Witch is based on the Diana Wynne Jones novella of the same name and is a natural fit for a studio that has both a feature with a young witch protagonist, and an adaptation of another of Wynne Jone’s novels under its belt. The film centres on an orphan called Earwig but endowed with the name ‘Erica’ by the orphanage matron.

The Blu-Ray/DVD combo (and regular DVD) is released by GKIDS and Shout! Factory and comes out this April 6th.

While the lack of development on Earwig’s part doesn’t jive with contemporary western thinking, both the director and Ghibli producer Suzuki Toshio state that they wanted to make her a character that kids could relate to. Indeed, the tagline for the Japanese poster above states that she “will not be put under anyone’s thumb”. With this in mind, Earwig’s character makes a bit more sense and seeing her twist the adults around her little finger has to be satisfying for kids who, generally, have to abide by grown-up’s wishes.

The story is straightforward but, and it’s a big but, the final act is incredibly rushed. In the course of watching the film, I sensed the final act approaching and paused to see exactly how much time was left only to discover it was less than five minutes. So shocked was I that I had to double check to make sure my stream wasn’t broken but no, that’s all that was left. This exceedingly rushed climax and the loose ends left unresolved would be more frustrating if it also weren’t the case with the book the film is based on. Reading reviews for it reveal identical confusion with a rushed ending and loose ends that suggest another half of the story that doesn’t exist.
Growing up in an orphanage in the British countryside, Earwig has no idea that her mother had magical powers. Her life changes dramatically when a strange couple takes her in, and she is forced to live with a selfish witch. As the headstrong young girl sets out to uncover the secrets of her new guardians, she discovers a world of spells and potions, and a mysterious song that may be the key to finding the family she has always wanted.

Goro (and his producers) are not oblivious to the economics of animated filmmaking and are well aware that CGI presents numerous advantages over traditional animation. Earwig is the studio’s first full-length CGI feature and they should be given some slack for at least trying.
Overall, I liked Earwig and The Witch. There’s a simplistic honesty to it of the kind that you don’t see in western films anymore for better or worse. It’s genuinely made for the kids in the audience which some may see as a detriment but is, in fact, a Studio Ghibli hallmark that Hayao Miyazaki has stated time and time again.

NOTE: This is a review for the forthcoming Blu-Ray/DVD combo release from GKIDS and Shout! Factory and not the film as shown on HBO Max.

The Blu-Ray/DVD release comes with a few extras such as the aforementioned ‘Making of’ featurette, full-length storyboards, and an interview with the Japanese voice cast. I found the ‘Making of’ in particular helped fill in a lot of hitherto unknown details about the film which really helped me see the film in the same light as the filmmakers.
In this sense, the filmmakers were a bit too faithful to the source material and another half hour could have filled in a lot of gaps; especially since the big reveal is very exciting altogether. Except it doesn’t and any adult members of the audience will be left with questions answered but answers questioned. Kids on the other hand, should love that everything appears to work out for Earwig in the end.
Backgrounds and props show a true attention to detail. The English countryside is rendered with an incredible accuracy that does match Pixar. The house itself (and the Mandrake’s rooms in particular) showcase a real flair befitting (spoiler) his musical tastes.