Angel Manuel Soto (Charm City Kings) is set to direct, while Gareth Dunnet-Alcocer (Miss Bala) will pen the script. Casting has yet to be announced.
Laurén Alexa acts as social content producer and journalist for AWN.
The upcoming film is based upon the 2006 version of the scarab superhero, a Mexican American teenager named Jaime Reyes. According to Variety, “His powers come from a mysterious scarab that binds to Reyes’ spine and provides him with a powerful suit of blue alien armor that can also equip him with bespoke weapons and wings.”
Representation of this caliber for the Latinx community is deeply exciting, and a necessary step towards diversity in the “superhuman” genre. Who do you think should play the eponymous Blue Beetle? What comic book character would you like to see next on the big screen?
Another win for the Latinx community! It was recently revealed that Sasha Calle will portray the first Latina Supergirl in the upcoming Flash movie that stars Ezra Miller; now, another DC film is following suit with the announcement of the first Latino superhero movie, Blue Beetle. The interesting insectoid originally debuted as a Fox Comics character in 1939, made the transition to DC in the 1980s, and will now rise to the silver screen. 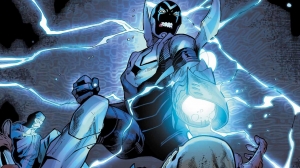