Spire was started by animation producer Brad Lewis (Ratatouille, How to Train Your Dragon: The Hidden World), and P.J. Gunsagar of Prana Studios and Kidaptive. “We’ve been on this slow-moving collision between traditional production and what’s happening with these next-generation, real-time technologies,” Lewis said in a statement to GamesBeat. “And once you can prove out the quality, there’s really no going back. And we’re at the forefront of doing that on the feature-length animation side.”
The future is now! Spire Animation Studios, the creative force behind Century Goddess and Trouble, are one of the first groups to receive support from ‘Unreal Shorts,’ a new grant and fellowship program created for companies that utilize Epic Game’s Unreal Engine.  Open to indie and experienced filmmakers alike, the program is currently funding 44 other projects including a major feature film.

Studios and indie filmmakers looking to utilize Unreal Engine and take part in training are welcome to apply to the Unreal Fellowship, which offers training and funding for real-time productions.
Unreal Shorts is part of Epic’s greater efforts to create a metaverse of virtual worlds interconnected through the Unreal Engine. Spire will now potentially create projects included in this metaverse, as Gunsagar plans to seek out a “longer-term technical partnership.” Lewis added, “We will ideally work with [Epic] going forward on how we integrate the engine in a pure feature pipeline.” 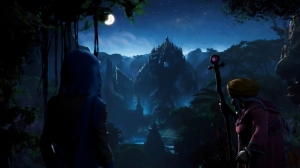