Sidebar
Browse
Besides the crass elements, some of which work simply because we are not used to seeing such mature content in cg American animated features (the last example may be Sausage Party), the screenplay by Martin Ambrosch deals with the Nazi sentiments that still plagued the embattled nation in the years after Hitler’s demise, the hypocrisy of the Catholic church, and the enduring xenophobia against minority populations such as the Roma.

The relationship that develops between Herra and Maad, one of mutual compassion as outsiders in this restrictive microcosm, acts as the emotional compass in a story about culture clash, unchecked toxic masculinity, and speaking out when silence and submission is expected.
From a visual standpoint, the characters are not precisely pleasing; their movements and facial expressions are a bit stilted, even though there is a great level of detail in their creation. The boys are all designed to appear a bit grotesque, matching the puberty changes afflicting them. A handful of scenes in which Snotty Boy experiences romance remove the narrative momentarily from reality imbuing a bit of simple magic: he floats in a cloud of shiny pixie dust after a brief kiss.

At some point, a supporting character recounts another legend that touches on the evils of capitalism and the need for a new type of currency for people to prosper. This further complicates things. In terms of narrative and world-building, the film is sometimes muddled. That said, there’s plenty to be enchanted by.
[embedded content]

Poignant without turning saccharine, the film handles Lubicchi’s loneliness and Poupelle’s innocent resolve to offer comfort with a beautiful tenderness that matches some of the dazzling moments of gorgeous visual wonder, especially in the third act. Yet the storytelling is rather convoluted. This is not solely due to the excessive repetition of certain exposition beats from multiple perspectives, but also because there’s too much mythology and information that must be relayed in order for us to understand this alternative reality.
All in all, the result is a strange concoction of important themes, like acceptance and believing in one’s talent, and gross allusions to masturbation or defecation. Since it’s also not impressive on an artistic level, the film might have a hard time finding much of a market internationally.
In that regard, Pavlátová’s film is closer to The Swallows of Kabul or Flee, the winner of Annecy’s top feature prize this year, than to Cartoon Saloon’s more whimsical The Breadwinner. Still, all these titles have harnessed the medium to shine a light on the most at-risk segments of the population in a war-torn country without much of a functioning film industry of its own. Animation has become a window into Afghanistan’s recent history. 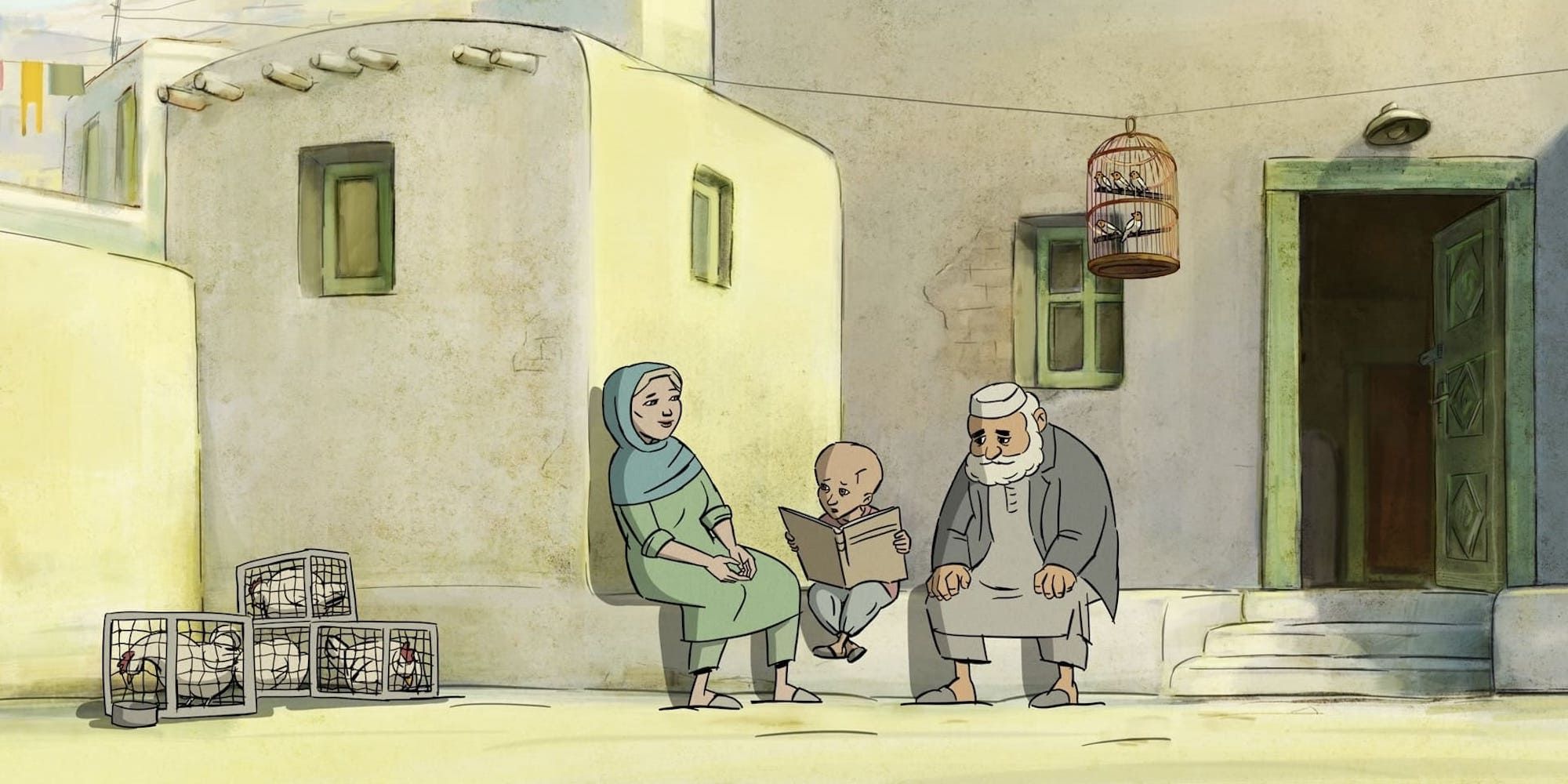 Stylistically, My Sunny Maad features hand-drawn characters with defined outlines and detailed textures; the aesthetic is similar to a graphic novel’s. Although the story is set in the post-Taliban era, women’s position in the patriarchal society, where their fathers or husbands have total control over their lives, hasn’t much changed.
Tonally and aesthetically, Snotty Boy is at the opposite end of the vast spectrum of animation from Maad. Between them, the two films reaffirm the medium’s applicability to all genres. This effort from co-directors Santiago Lopez Jover (an animator on Song of the Sea) and Marcus H. Rosenmüller (whose background is in live action) is a raunchy coming-of-age period comedy inspired by the life and work of satirical Austrian artist Manfred Deix.

Picture Tree International is handling world sales of “Snotty Boy.”
There are few moments of respite in this tense and disheartening drama, which is suited to mature audiences. One dream sequence sees Herra and Nazir’s young niece Roshangol (Maryam Malikzada), who is about to be married off to a much older man, skating and running with other women while they all let their hair flow out of their burkas. Later, the boundless language of animation is used to transform a car’s windshield into a portrait that reveals the family’s mourning after a major tragedy, which shape-shifts in turn to show Herra driving.

Though the original material follows a Russian woman, this version makes the protagonist Czech. Herra (Zuzana Stivínová) is a university student who marries Nazir (Haji Gul Asir) after just two months of dating and moves to his homeland of Afghanistan in the 2000s.
Unable to have children of their own, Herra and Nazir adopt Maad (Shahid Maqsoodi), a boy with an unnamed health condition that causes a peculiar physiology and plenty of rejection. Pavlátová handles Maad’s physical differences with great tact through character design that makes them clear but doesn’t ridicule them.

The boy’s desire for companionship manifests in his friendship with a garbage man (Masataka Kubota), quite literally a humanoid entity made up of pieces of discarded waste that becomes sentient after a rock from outer space crashes in a landfill. Lubicchi names him Poupelle Halloween. An early scene in which the new comrades embark on a dangerous rollercoaster-like ride through the bowels of Chimney Town makes for an immersive experience and sets the tone of their loving complicity.
As Herra becomes more aware of the restrictions on her agency and the situation in the country turns violently volatile, her genuine and reciprocated affection for sensitive Maad and Nazir, a slightly more tolerant and open-minded man than most in this context, becomes her only anchor.

Perhaps the most traditional of the three titles we got the chance to watch, since it tells a fantastical fable in a fictional land, is Poupelle of Chimney Town, one of several Japanese features that were in competition at Annecy this year.
For her thought-provoking first animated feature, Oscar-nominated director Michaela Pavlátová, who’s produced in both live action and animation over the years, worked from Ivan Arsenjev and Yaël Giovanna Lévy’s adaption of the novel Frišta by Petra Procházková.

A cinematic reimagining of Akihiro Nishino’s picture book of the same name, this quasi-steampunk adventure/buddy film represents the directorial debut of veteran cg artist Yuusuke Hirota (Shin Godzilla, Mind Game). Using mostly a non-photorealistic cg style, Poupelle showcases meticulously executed digital backgrounds that provide us with a sense of scale within this land.
Underneath all the conflicts lies the father-son bond between Lubicchi and his late dad Bruno (Shinosuke Tatekawa), a dreamer who wholeheartedly believed there was more.
An invaluable quality of dedicated animation festivals like Annecy is that the program amounts to an eclectic sampler of the medium’s breadth of genres and techniques. For this year’s hybrid edition, the world’s most important animation event selected everything from hard-hitting social dramas to family-oriented fare. The features played only at the onsite festival, not online. Below, we review three disparate films from the competition line-up. 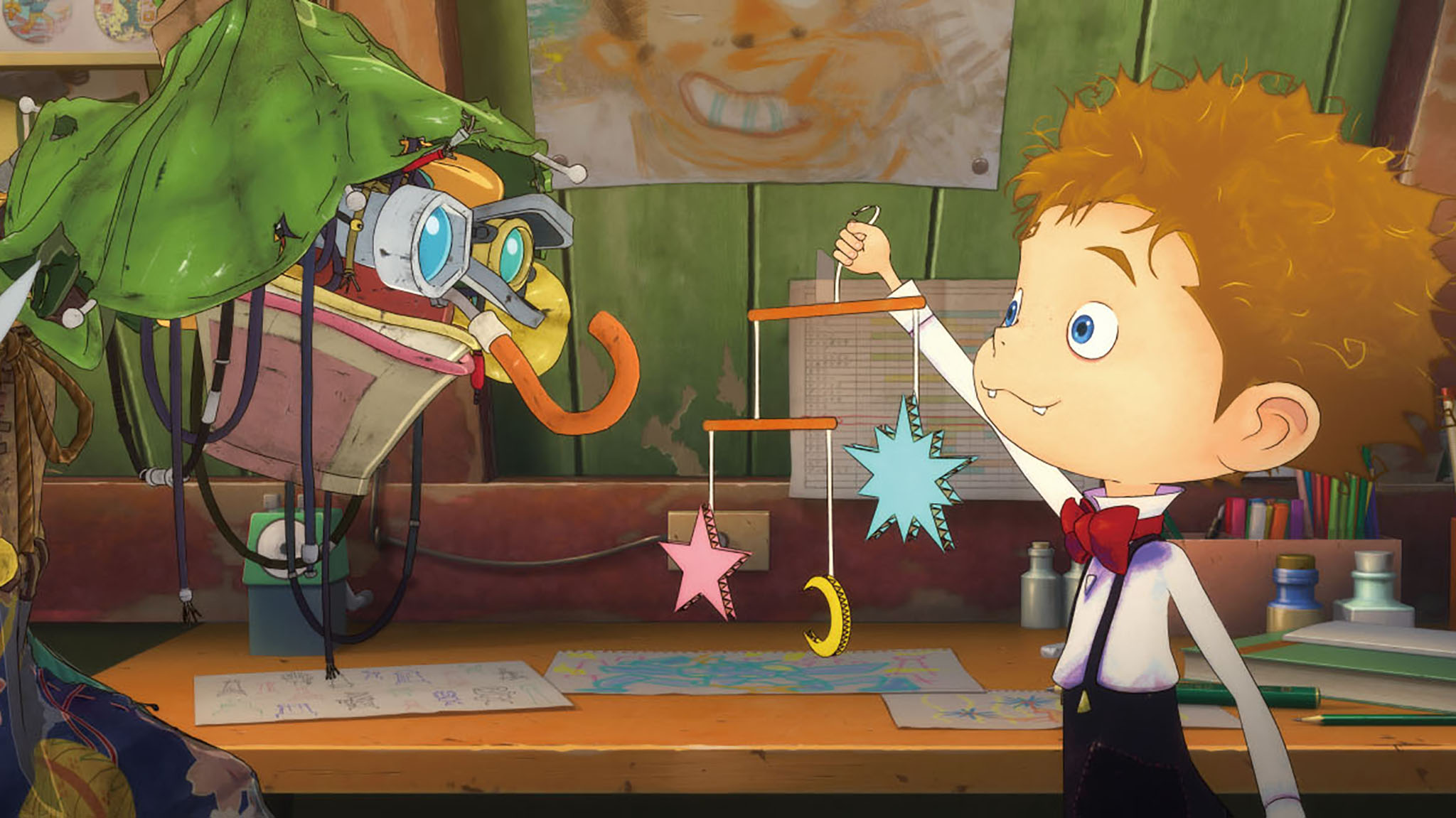 Scrawny but brave Lubicchi (Mana Ashida), a boy who resembles a small vampire with prominent canine teeth and a top hat, works as a soot sweep. As we learn, the town gets its name from all the chimneys that release massive amounts of black smoke. No one here has ever seen the blue sky or the stars. Residents live in perpetual darkness under a tyrannical government.
With 1960s small-town Austria as its backdrop and World War 2 still lingering in the population’s minds, the film centers on the titular Snotty Boy (Markus Freistätter), an adolescent undergoing growing pains and his sexual awakening. Since this teen is an innate artist with a talent for lifelike drawings, his friends encourage him to create pornographic illustrations to sell to other lustful boys. Throughout, there are women with exaggeratedly large breasts, sight gags involving penises and extramarital sex, blasphemous art, and scatological humor.
“Poupelle of Chimney Town” is due to be released worldwide this year.