content“>
How long were you in production and what was the budget?
Mielgo: I’ve been working in commercials because I need it, but I would love to gravitate towards more personal work otherwise. It’s very important to be pure with my art. It happens more and more that big networks approach me with scripts and ideas that do not resonate with me. They’re juicy in terms of money, but I refuse to go that way.
[embedded content]

Mielgo: I am extremely cynical with love. Maybe I can answer best by explaining the title. When it rains while you’re driving, the windshield wiper creates a sort of pattern. Each time you clean, the pattern appears again but completely different.

Talk a bit about the design and overall technical approach…
Leo Sanchez: Alberto and I have known each other since back in the day in London. I arrived in London in 1999 and was there until early 2006, when I moved to L.A. Alberto has a similar trajectory, just different years. We met there and have remained friends.
Sanchez: On the character side, one of the things I knew looking at Alberto’s work: it has very graphic but tangible lighting and texture. That was my perception. One of the things was to work on the rendering and lighting in 3d, but also to get Alberto’s graphic level onto the model, the designs, and the animation.

We developed custom tools that allowed us to meticulously sculpt the characters on each shot, so we could get the level of graphism required by Alberto’s style and art direction, preserving a much more crafted feel.
I remember putting together a whole storyboard and saying, “Let’s see if I can direct a film.” I started some production with some studios but that didn’t work. Then I realized it had to be done in a very independent way.
Sanchez: Yeah, you tend to underestimate the technological side, and we were doing this on the side. If we had more financing it would have been a different story.
Mielgo: Leo and I have separate studios, but in a way, we were going in the same direction. It was more like two creative forces that needed to be aligned. We’ve been friends for a long time, so that’s overlapping too and Leo has a role as an artist too. There were a lot of moments where we thought this was getting messy. It wasn’t a field of flowers. It’s not easy to make a film with friends, but the film reflects love.
Aside from the time and lack of funding, what was the most challenging part of this long process?

Alberto Mielgo: It’s a very personal film, so personal that it’s extremely subjective. Like a voyeur, you get a peek at different lives for a minute. I wanted to show how love from the outside is something we don’t know much about.

Alberto and I were hanging out. He showed me the animatic of his new short film and I loved it. I offered to bring my studio, and experience in 3d and character creation and development, to the project. So one thing bled into another. It went from doing service to co-financing, and I was in charge of the front-end 3d pipeline and character creation.
Inspired by observations, encounters, and personal experiences, Mielgo attempts to reveal the impossibility of knowing just what love really means, especially in a world where random in-person encounters have been replaced by technologically mediated swipes and likes.
Love is like this. It’s always going to change. Maybe it’s called “flove” the next time or “flaff.” Maybe we struggle so much with love because we try to define it. No one relationship is the same. It’s complex and there’s the commercial part of love: dinners, proposals, Valentine’s, and all this crap.
Mielgo: I used to be more active to meet people in person. Hollywood films are full of accidental encounters, but nowadays because of technology and changing societal codes, it’s maybe made it more difficult to meet people. Yet dating apps are also connecting you with people you might never see in your life, so I have a very mixed feeling about this.
Like “The Witness,” The Windshield Wiper is very simple in terms of technique. The same way that Master Disney was doing it back with Bambi. We have a background that’s like a 3d painting, and then a character walking around within that space. That’s very much what we did here and with “The Witness,” but instead of having a 2d character, you have a 3d character walking within that space.
In the short film The Windshield Wiper, which debuted at the Cannes Film Festival in July, Alberto Mielgo attempts to uncover what it is about this thing called love that so enraptures humanity. Mielgo — who was art director on Tron: Uprising, directed the segment “The Witness” on Love, Death & Robots, and did early production design work on Spider-Man: Into the Spider-Verse — held many roles on the short, including director, screenwriter, editor, and sound designer.
Let’s talk about love. Are we meant to find true love, to just love one person? Sometimes it feels like love is a brand that’s sold to us to rush out and consume.
Sanchez: At the end, we put the credits as we best described. It was Alberto’s vision, and I translated his characters from 2d paintings to 3d. It was a great synergy. We’ve never really worked together so it was quite interesting. Not being a commercial project meant there was room for evolution and change.
You’ve got a segment with two phone-obsessed people in the grocery store completely oblivious to the possible love that is standing right next to them. Do you think technology has made it harder to find love or is it just reflective of what the next generation wants?
Mielgo: In terms of design, I come from an art direction and painting background. When I’m directing, I like to design the character, design the clothes, the overall look of the film. That’s something that obsesses me.

Mielgo: I did it pretty quickly. I did the storyboards over a Christmas holiday. I had some characters (all invented, but based on pieces of myself) and vignettes and personal experiences, and I just started laying them out and doing the editing. Later, I was adding and removing scenes. The base was done fairly quickly.
Mielgo: I would say forever. It’s not a financed film. We did it for the sake of art and with no money. We were doing it in the evenings or between jobs. If we got a big gig, we’d have to stop. We might leave the film for a year. So from beginning to end — and there’s Covid, which forced us to stop for a year — it was probably six years. It’s not firm because we can’t quantify it like that.
Leo, how did you end up working with Alberto on The Windshield Wiper?
Alberto, you’re coming from a more commercial background. Do you make these side projects to keep yourself sane or do you see yourself moving more towards personal projects?
How long did it take to settle on the story and characters?
Below is a gallery of production background paintings and character designs by Mielgo:

Mielgo: It was nuts.
Were your roles clearly defined or was there a lot of overlap?
Mielgo’s and Sanchez’s answers were edited for clarity and brevity.
Combining keyframe-animated cg characters with digitally painted backgrounds, The Windshield Wiper is a poignant and visually impressive work that captures the challenges, superficialities, and chances of modern love. Cartoon Brew spoke with Mielgo, as well as producer and lead artist Leo Sanchez, via Zoom to discuss the long process of making the film.
Cartoon Brew: What are the origins of The Windshield Wiper?

Sanchez: In terms of budget, it would be so unfair to just throw out a number. There is so much love put in this work, uncountable numbers of hours we have put in all these years, and the work of amazing artists around the globe just with a true passion to be part of this.
Love. Has there ever been a more alluring, mystifying, menacing, or misunderstood word? A feeling that has caused more joy, pain, or utter confusion, or led humans to greater heights and deeper falls?
Mielgo: I think Leo or anyone who works in 3d will agree: 3d is the most challenging. It’s extremely unexpected. There are a lot of things that can happen and go wrong. Why did the character come out without hair or a head? It’s very frustrating. The technical side just exhausts everybody because there’s one mistake after another.
Just like love.
I’m humbled that big networks approach me, but then they say they don’t want nudity and sex, which is a part of my work. It’s a bit offensive because it’s like liking a person for how beautiful they are but telling them not to talk.

Framed by a philosopher in a café overhearing assorted chatter above love, the narrative moves through a series of vignettes related to loves lost, found, and missed. We meet a homeless man who mistakes a shop window mannequin for an old flame; a suicidal woman; a couple sitting silently on a beach; a man and woman in a grocery store, too busy scrolling for love on their phones to recognize that it might be unfolding next to them.
I had a few vignettes and was obsessed with love. The philosopher was the first of my ideas, in fact, and what triggered the main story. I was having lunch in that same café in Madrid overhearing conversations, and the structure of the story came fast. 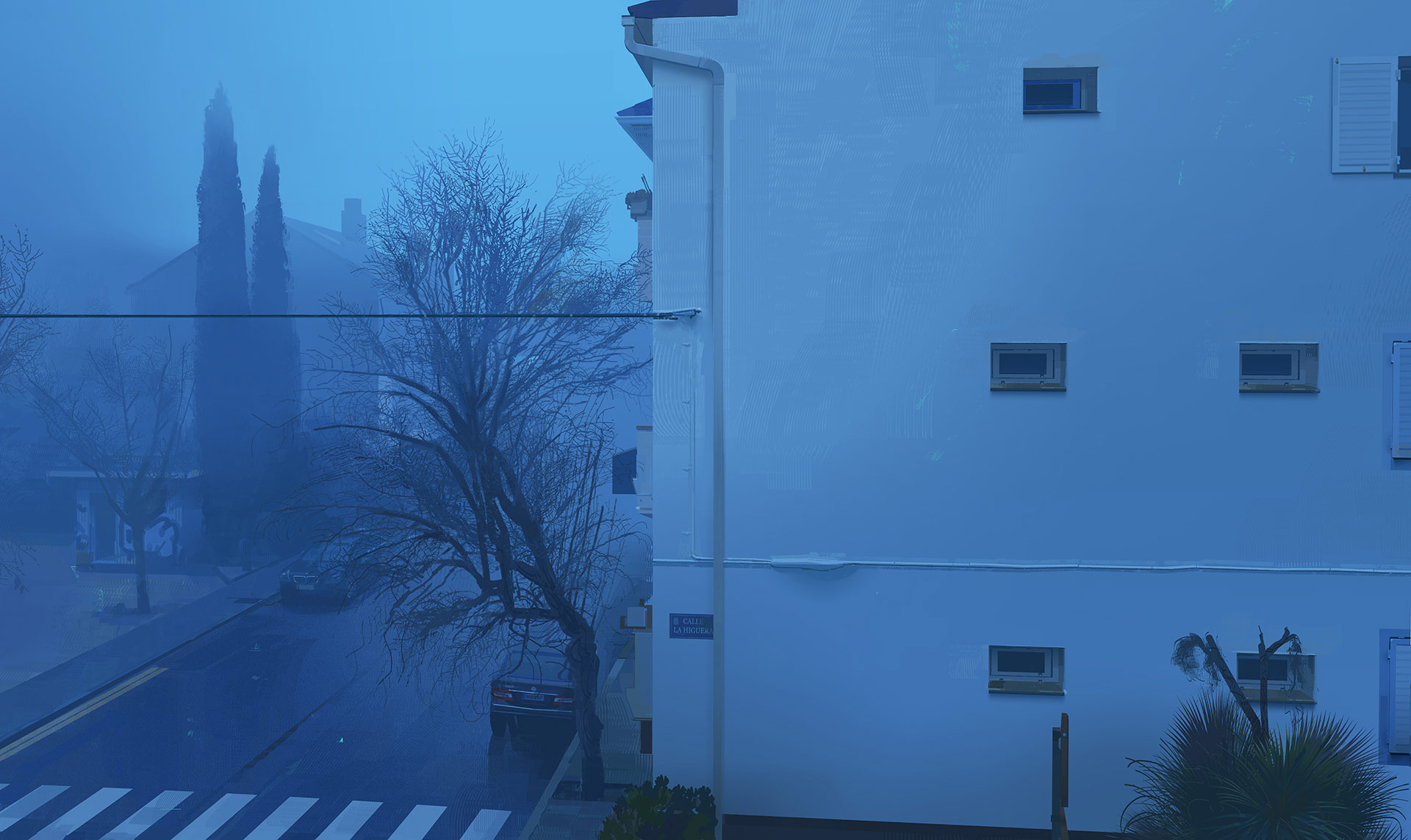 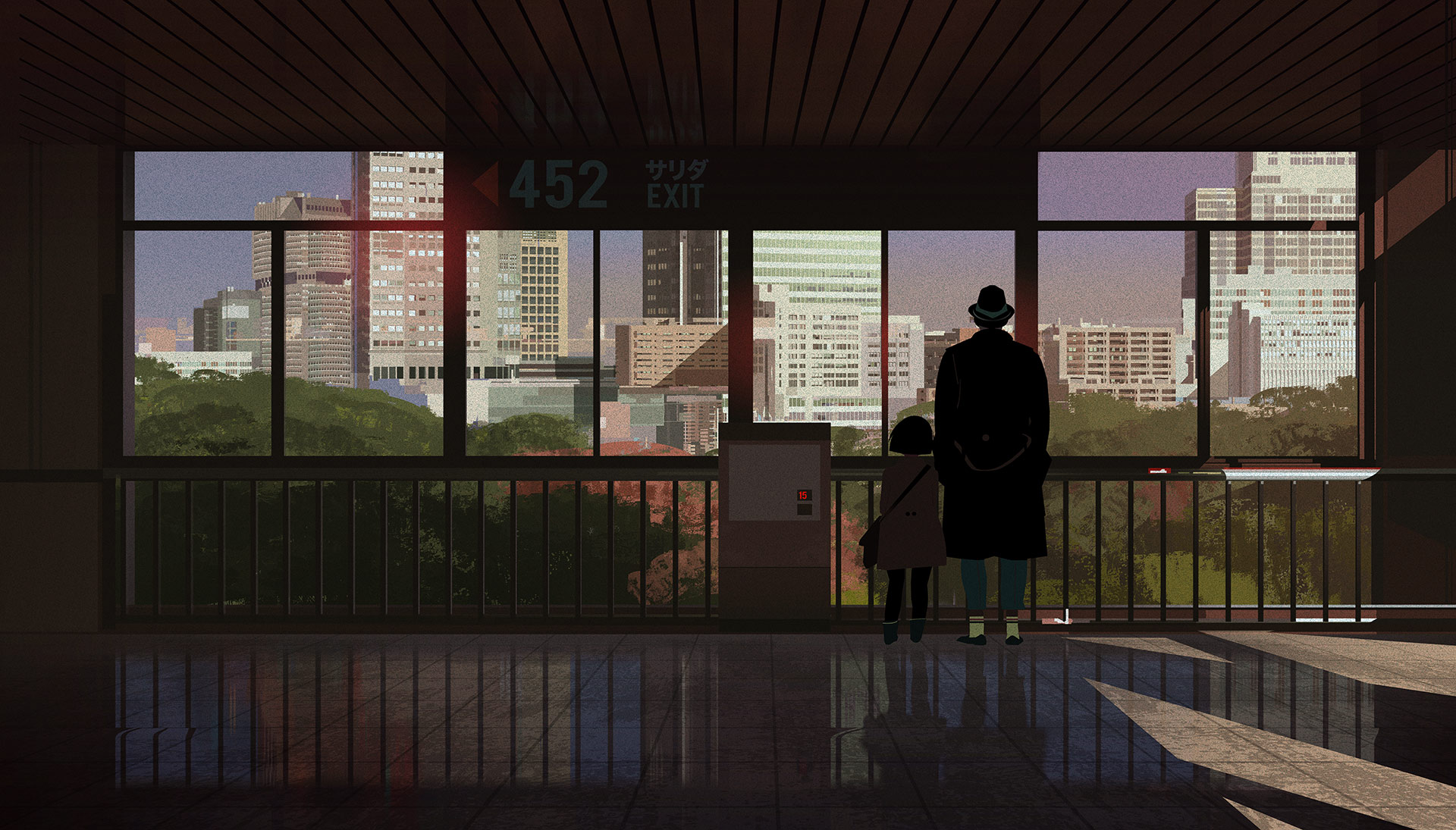 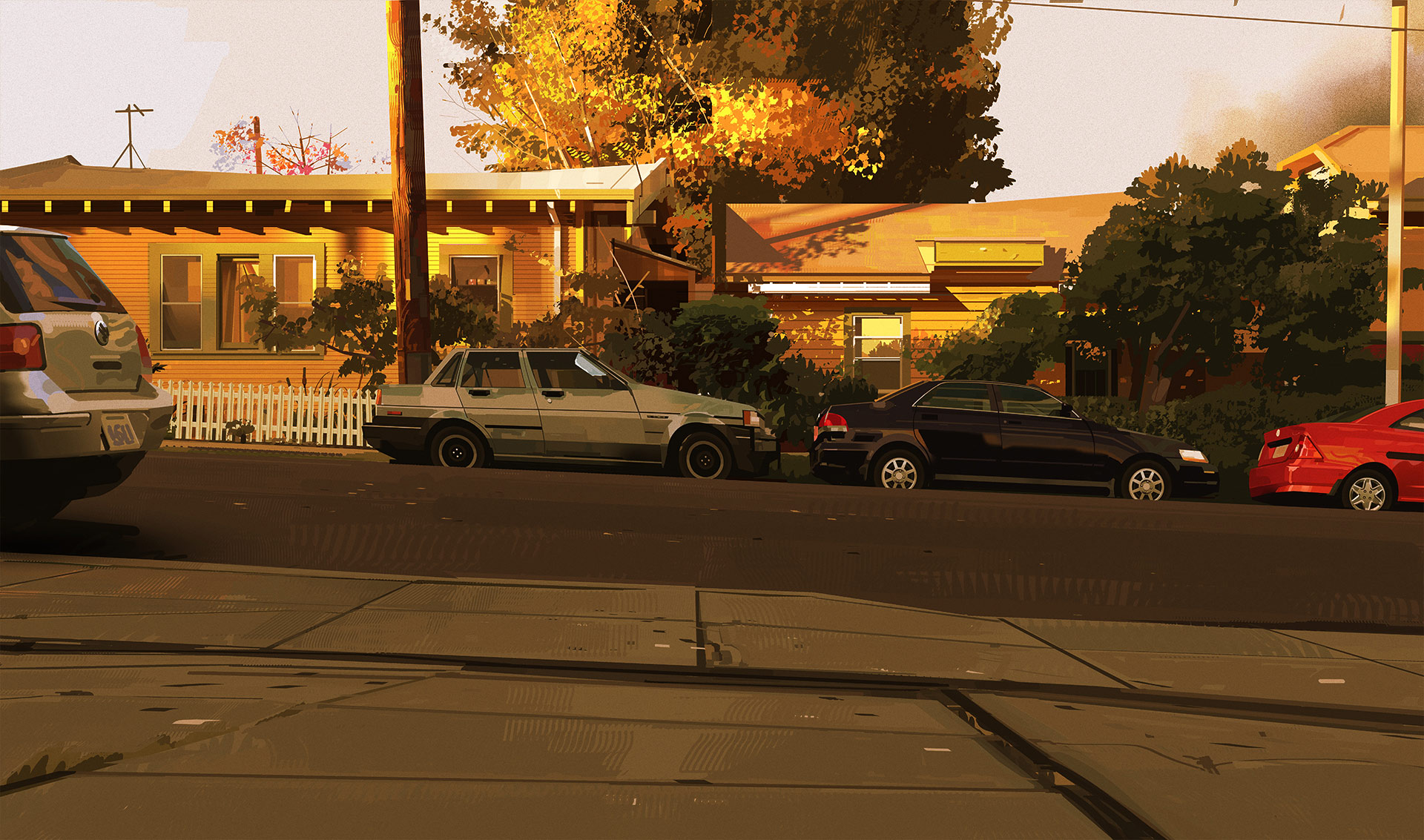 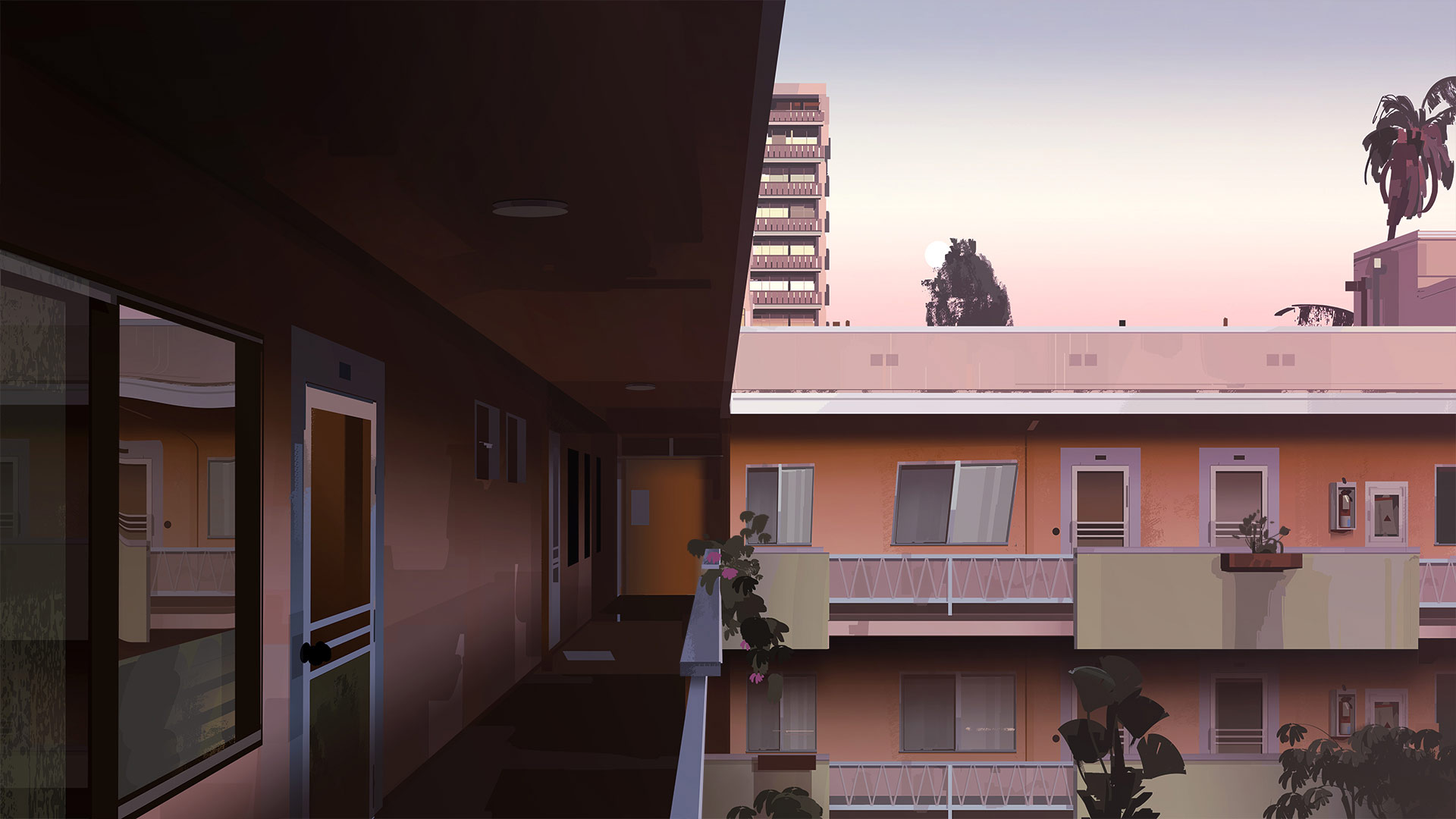 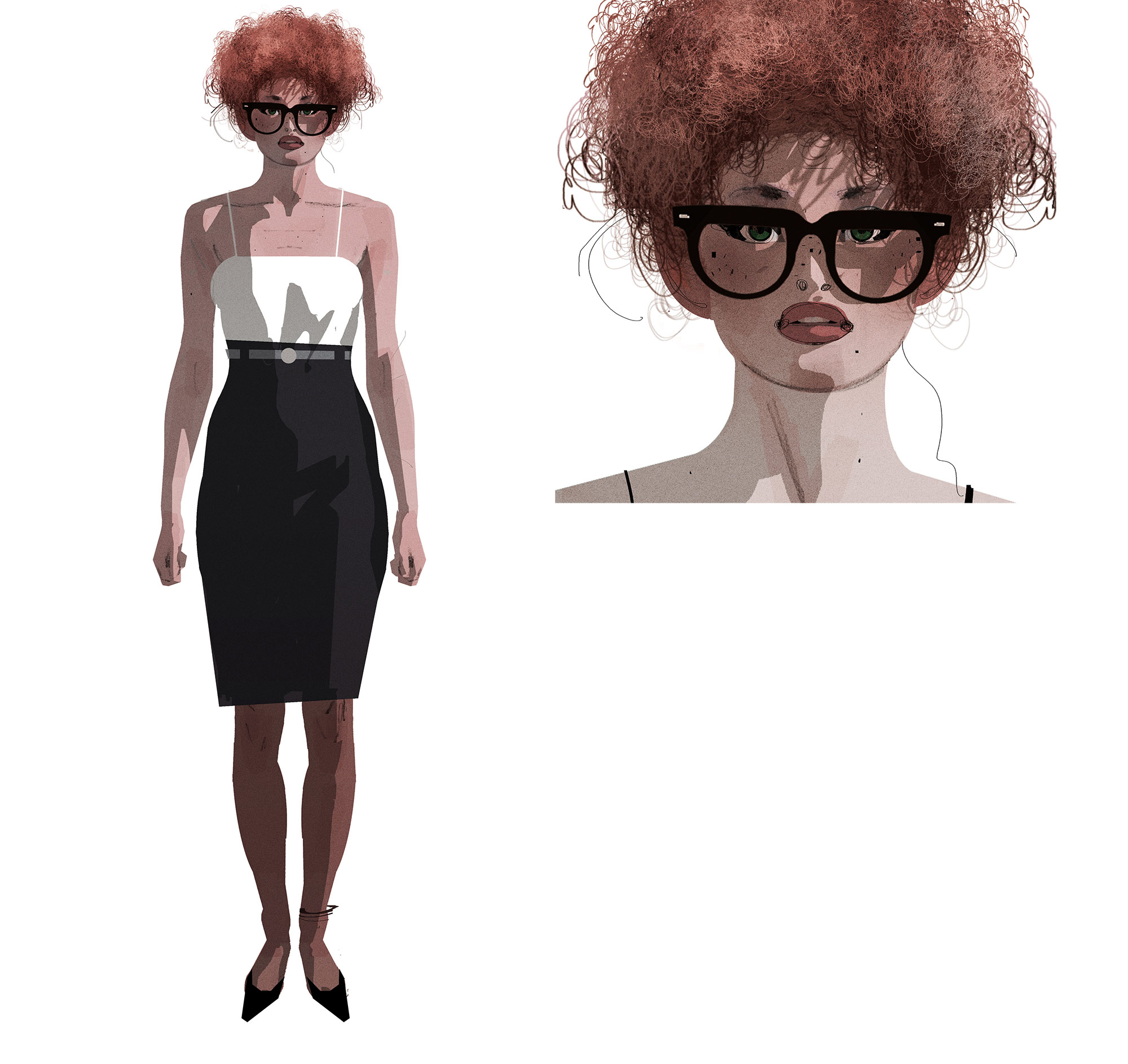 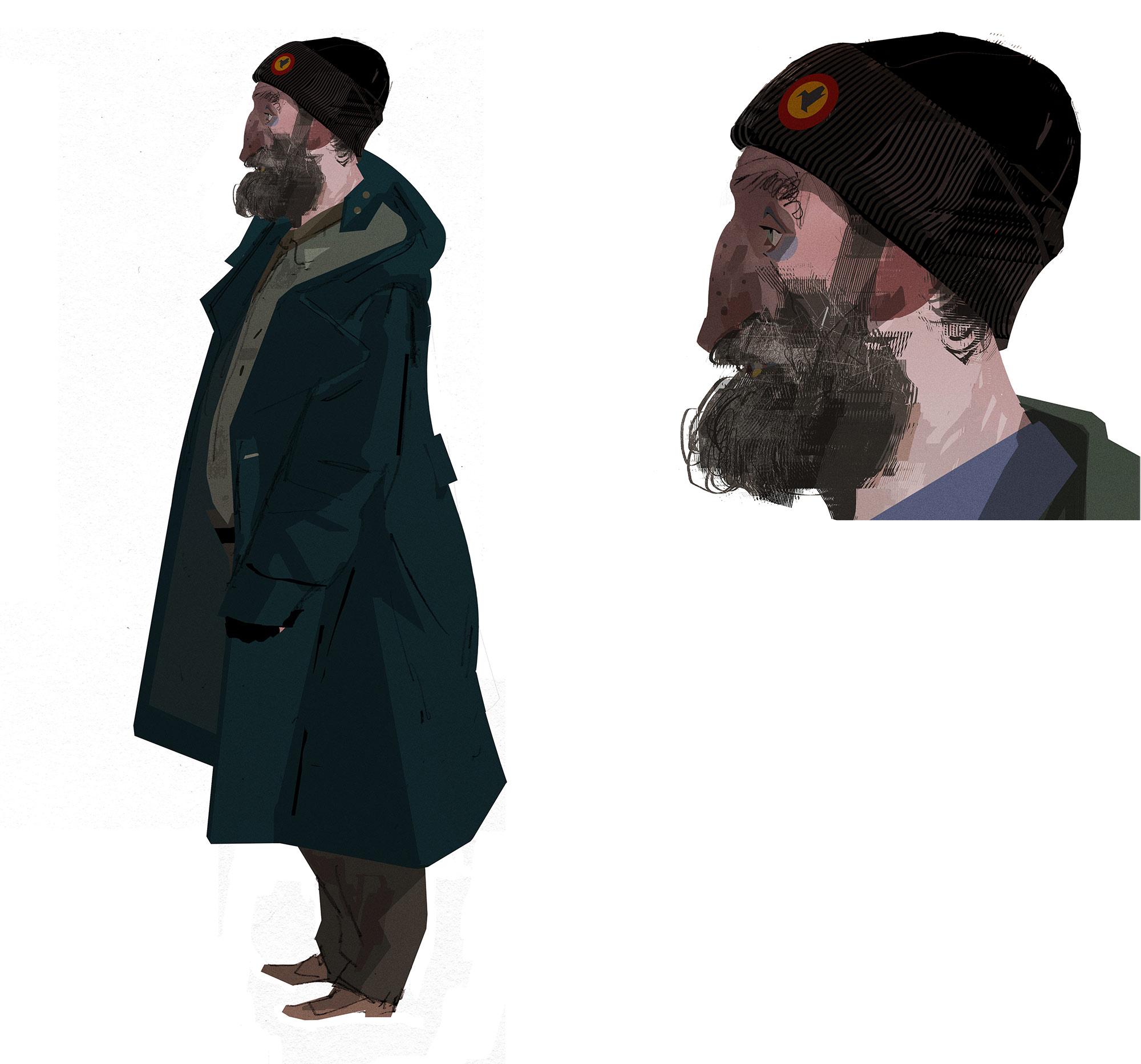