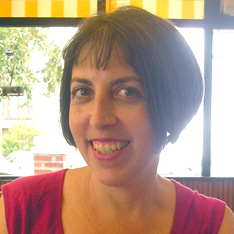 When Nickelodeon Magazine was (re)launched in 1993, Bernstein joined as senior editor with oversight of the comics section. “[W]hen I got there, I contacted all these cartoonists that came out of the ‘underground’ world,” she told Write Now! in 2002. She commissioned artists like Kaz, Mark Newgarden, and Jay Stephens.

The show is pre-school, which was certainly not Anne’s natural place for comedy. But she was just fantastic. She was able to write stories little kids could understand and enjoy that also played at a second level for the parents.
Gradually, the writing gigs accumulated. Bernstein penned questions for game shows (“a horrible job”) and pieces for magazines like National Lampoon, where she was a contributing editor. She was a regular on Nickelodeon and MTV shows, writing for live-action series like Welcome Freshmen and the occasional animation title, like the “Soap Opera” segment of Liquid Soap.

Anne D. Bernstein, a writer, editor, and cartoonist closely associated with Nickelodeon and MTV Animation, has died. She had been suffering from multiple system atrophy, according to her friend Robert Leighton.
Hired as a writer, Bernstein put her stamp on the show, creating characters and storylines, and helping flesh out the world. She said she worked with co-creator Glenn Eichler “almost exclusively.” She worked, on and off, on all five seasons, as well as writing lots of material for the website and the spin-off book The Daria Diaries.
Bernstein was born in the Bronx and raised on Long Island. She majored in graphic design at the School of Visual Arts, and on graduating in 1983 started working in that field. But her interests ranged too widely to keep her there. Passionate about art, underground comics, and sketch comedy, she spent her twenties varying her pursuits: she illustrated for The New York Times, wrote for comedy troupe Chucklehead, and started drawing comics. She drew the cover of the first issue (1990) of now-famous comics anthology Drawn & Quarterly.
Bernstein’s role at MTV Animation reached far beyond Daria. She worked in story editing and development on other shows. When a young artist named Chris Prynoski pitched a New York-set show called Downtown (1999), she helped develop it and became head writer when it was greenlit. Alongside Daria, this was the project she was proudest of having worked on. But it was canceled after one season, and soon after MTV Animation was shut down.

In her comics, sketches, and scripts, Anne could write a single line of dialog that would sum up a character instantly. . . She had a very acerbic eye, but she was not jaded in the slightest.

Being a television writer — especially in comedy — means you have to learn to speak up. When I was starting out, I would say something funny, no one would react, and then 15 minutes later a guy would say the same thing louder and get a laugh. It goes hand-and-hand with drawing attention to yourself and being outspoken, traits not always encouraged in women. Most of the time I work with people I like, I am accepted and I enjoy the healthy competition.

Like her story “The Missing Stink,” about a skunk who had been faking his foul stench his whole life by taping smelly cheese under his armpits. Determined to lead an authentic life he goes out in search of his inner stink. And, oh yeah, it had a musical number modeled after “My Shot” from Hamilton. That episode still cracks me up.

After her stint at Nickelodeon Magazine, Bernstein had deliberately moved away from children’s projects, which she saw as “a real ghetto” for a woman in the industry. Yet her post-MTV career was defined by shows for kids and pre-schoolers. Her writing credits included Nickelodeon’s The Backyardigans, Discovery Kids’ Tutenstein, the international version of Russian hit Kikoriki, and the South Korean-Chinese co-production Super Wings.
As a writer on the show, Bernstein was a lone woman among men — a situation familiar from her early days in comedy, and which would repeat itself throughout her career. As she told Animation Magazine in 2014:

Bernstein was fond of quoting a quip often attributed to Dorothy Parker: “I hate writing. I love having written.” She will write no more, but what she has written will remain to entertain viewers young and old.
As an animation writer, Bernstein stood out in several ways. She was a woman in an industry of men and a New Yorker who never left her city for L.A. Although she spent the bulk of her career in animation, she followed a circuitous path to the industry, building up a wonderfully eclectic résumé as she went.

By now, she knew many people at MTV’s and Nickelodeon’s animation units. On the lookout for a new job, she was shown development materials for MTV’s Daria (1997–2002). “[W]hen I read the character descriptions I immediately knew that I could write this show,” she recalled.

Bernstein’s friend and colleague Michael Mennies worked with her on series including Kit and Kate. As he told Cartoon Brew:

Robert Leighton, Bernstein’s friend since their teenage years, also spoke to us about her talent: