CMG has already pre-sold Kayara to 15 international distributors including Le Pacte (France); WW Entertainment (Benelux); Praesens (Switzerland); Front Row (Middle East); Rialto Distribution (Australia/New Zealand); and CDC (Latin America). The CG animated feature is set to release in 2024.
Debbie Diamond Sarto is assistant news editor at Animation World Network.
“Kayara is the story of a heroine who changed the role of women in many ways,” explained Toonz Media Group president of animation production Carlos Biern. “Her epic journey follows situations and characters that can be easily identified by today’s audience, even though the story is set 500 years ago. We are very honored to bring it to life in our Spanish speaking animation industry, together with the award-winning Tunche studio.”
“It is, indeed, a privilege for Toonz to partner with Tunche Films for this very ambitious project which has its roots firmly placed in ancient, indigenous wisdom and modern, progressive values at the same time,” commented Toonz Media Group CEO P. Jayakumar. “Apart from bringing on screen a strong female character, Kayara also provides us the unique opportunity to collaborate in a truly international project that brings together teams from diverse cultures across the world.”
“We worked with Dutch co-producers on Ainbo and the cultural exchange between our Peruvian team and the Dutch was very helpful to our creating an indigenous story with a worldwide appeal,” added Zelada. “We are looking forward to an exciting synergy in working with the Spanish based team with Toonz.”

Cinema Management Group (CMG) will act as executive producer and sales agent. The company was instrumental in bringing the two producers together and has already licensed the film globally to blue-chip distributors. The film will be directed by César Zelada (Together It’s Possible).
Source: Toonz Media Group
“After the positive experience of working with Toonz on the animated feature The Canterville Ghost and the good collaboration we’ve had with Tunche Films on Ainbo, we are delighted to have brought these two exceptional teams together for an exciting new production,” noted Cinema Management Group president Edward Noeltner.
The film follows the story of a young Incan woman who aspires to join the Chasqui messengers – an elite, male-only league of official messengers in the Incan Empire. In her quest to be the first female Chasqui messenger, Kayara courageously overcomes arduous obstacles, while also discovering the ancient stories of her land and people.

Peruvian animation studio Tunche Films is teaming up with Toonz Media Group to co-produce its animated feature Kayara, a female-led story that takes place against the backdrop of the Incan civilization. The project is being produced in partnership with the Toonz Spanish group company Fortoon Island. The news comes on the heels of Tunche’s release last year of the animated feature, Ainbo – Spirit of the Amazon, also a female-led adventure. 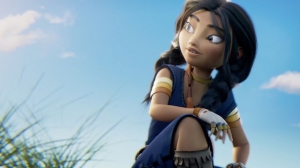