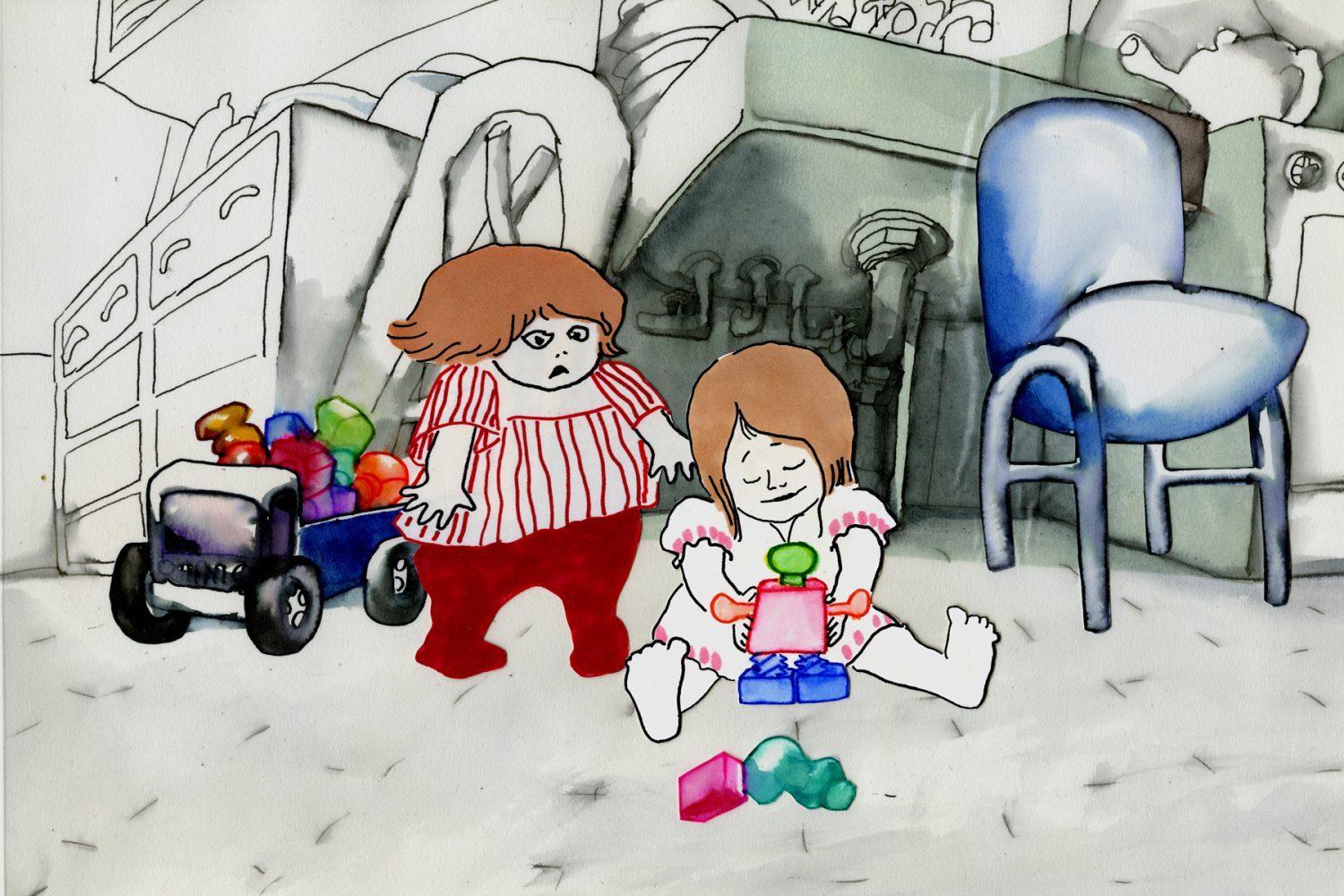 So, your parents never pushed you to be in animation? Where did that inspiration come from?
I’ll tell you what does happen though is that the old movies get quoted. A lot. In our conversations we will regularly quote lines from Cockaboody or Windy Day.
My kid’s experience was similar to my own in that the animation was always just part of their life. I think what was more more interesting was to hear what their friends would say! Especially with my son Max. He would meet people and they would bring up this film or that film, and I always wanted to know, “How did that come up?” I also love hearing about my friends’ kids discovering the films. One of my favorite memories is when a friend of mine called and whispered into the phone, “The boys are in the bathtub and they’re doing Cockaboody!,” and I could hear them in the bath doing the jokes and laughing. But to answer your question, no, I don’t remember any real formal sit-down viewings for the kids.
Emily Hubley: They always brought their work home with them, it was always very wrapped up in our daily lives. It’s what we knew, you know? Things that are normal to you growing up, you don’t really have anything to compare them to, even if it might seem unusual to other people. My parents didn’t have particularly happy childhoods, so they really wanted to include their children in their lives and have fun with them. They loved their work, but it could be all consuming, so the studio was always walking distance from the house. That way they could come back home for dinner and then go back to work if they needed to.

When did you and your siblings start to get involved in their work? Did you get hit with the animation bug at an early age?

For the grandkids, is Faith and John’s animation always around like it was for you, or is there a time, an age where you sit them down and say, “Here are grandma and grandpa’s films?”
Growing up, how much a part of your lives was your parents’ work? How aware were you of what they did, and the success they found as filmmakers?
Every year, millions of American families participate in Take Your Child to Work Day, which is happening today. For Emily Hubley, a celebrated filmmaker with more than 40 years of experience directing independent animated films, she lived Take Your Child to Work Day throughout her upbringing.
Well, I went to a sort of experimental school, Hampshire College. But I went there to write stories. My parents would come up to visit me sometimes and they became kind of friends with my film teacher Tom Joselin. One day he asked me, “Why don’t you do animation?” I told him that I couldn’t draw, couldn’t do this and that, and I just want to share these stories. But also, I didn’t want to be on camera; that was even more frightening than drawing. So he told me to just try drawing and that my work didn’t need to be anything like my parents’ films. That I should find my own way. Once I thought about it like that I was like, “O.k. I’ll be as unlike them as possible and do my own thing.”
No, we don’t really watch the old films when we get together. But sometimes we watch them together at events. For instance, there was a program recently at the Museum of the Moving Image in Queens. I often speak at those kinds of things, but this time Ray volunteered and I was really happy he wanted to do it. He’s a film editor and he’s so smart, and he gave a great talk about how important the films were to our parents and how they expressed their values. They were always furious about the way kids were depicted in cartoons, and they were right. So, it was nice to hear him talk about those old films in that way.
For Take Your Child to Work Day, Cartoon Brew spoke with Emily about working with her parents, the role their film’s still play in the family today, and working with her own son on his budding animation career.
When we were young, they would bring us in to color things. We’d work at the studio over the summer as soon as we were old enough to use the markers. But beyond that I really didn’t get involved with animation until later. I never thought it was something I would do. I couldn’t draw very well, so for me it was really just something I did over the summer.
And are any of the Hubley grandkids doing animation now?
Lots of families have home movies, but most probalby don’t have their own home cartoons. When you and your siblings get together, do you ever watch the old shorts and reminisce like other families do with old Super 8 reels and VHS tapes?
The Hubley kids’ voices famously feature in classic short films such as Oscar-winner Moonbird (1959), Oscar-nominee Windy Day (1968), and the family comedy classic Cockaboody(1973). Once they were old enough to handle markers, summer breaks saw the kids recruited to help with coloring at the studio.
Emily, much like her three siblings Mark, Georgia, and Ray Hubley, grew up in the world of animation. Her parents, filmmaking icons John and Faith Hubley, were workaholics, but never at the expense of quality time with their children. In fact, Faith and John regularly involved their children in their work, melding business and play.
Readers interested in learning more about the Hubleys can find a selection of Faith and John’s films on The Criterion Channel, as well as a roundtable discussion featuring all four Hubley children.

My son Max [Rosenthal] and I made one film together [Brainworm Billy], and now I think we’re going to do another one. It’s going to be based on his crazy illustrations. The first one we used a lot of rotoscoping, but on the next one I’m going to make him do more. A couple of the ideas he has are really, really funny and just bonkers. I think they will be so much fun.