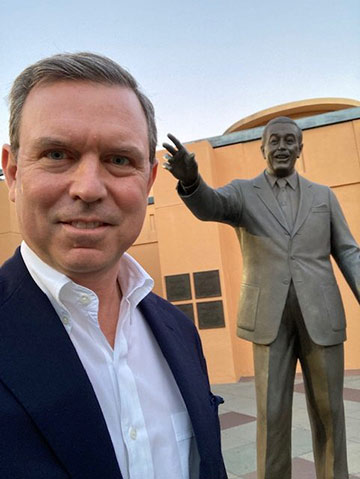 What kind of shots? On Wednesday of last week, while in Las Vegas campaigning for Republican Senate candidate Adam Laxalt, DeSantis accused Disney executives of injecting sexuality into its programming. “One of the things that really bugged me were these Zoom videos with all these people that are high up at Disney talking about how [it] was their intention to inject sexuality into the programming for these very young kids,” he said.
Who is taking over? The position is being divided in two, with Biden administration insider and recent Disney hire Kristina Schake taking over Disney communications and Disney lawyer Horacio Gutierrez handling government relations and global public policy. Chapek’s memo also announced that Susan Fox, senior VP for government relations, and Yvonne Pei, senior vp, external relations, Greater China, will join Dorothy Attwood, senior vp, global public policy, in reporting directly to Gutierrez.
— 🐊 smeallie (@KyleSmeallie) May 1, 2022
Was that it? Not quite. During a Fox News broadcast on Friday, DeSantis addressed his decision to revoke Disney’s self-governing status saying: “Having one company with their own government and special privileges, when that company has pledged itself to attacking the parents in my state; when that company has very high up people talking about injecting pansexualism into programming for young kids, it’s wrong. Walt Disney would not want that. So, get back to the mission. Do what you did great. That’s why people love the company, and you’ve lost your way. Maybe this will be the wakeup call that they need to get back on track.”

What do we know for sure? Disney CEO Bob Chapek announced Morrel’s departure in a very to-the-point memo sent to staffers last Friday. “I am writing to share the news that Geoff Morrell, our Chief Corporate Affairs Officer, is leaving the company to pursue other opportunities,” he said succinctly, not offering any further explanation before moving on to naming Morrell’s successors.
What’s this about injecting sexuality into programming? Presumably, DeSantis was referencing a call in which Disney corporate president Karey Burke said that as a mother of two queer children, she supports Disney introducing “many LGBTQIA characters in our stories.” She also pointed out that those characters should be allowed to “just be characters, and not have to be about gay stories.” Maybe the governor didn’t watch the whole clip.
The shock departure comes only four months after Morrell took over for long-time communications boss Zenia Mucha. His ousting comes as the company’s fight against the state of Florida continues to intensify. Meanwhile, with Elmer Fudd-like aim, governor Ron DeSantis has starting taking shots at modern-day cartoons.
Why the changes? Morrell’s departure and the movement of so many executives who work on the political side of Disney’s business seem almost certainly connected to DeSantis’ increasingly aggressive and very public attacks against the company. Two weeks ago, the conflict escalated when DeSantis signed new legislation into law that revokes Disney World’s self-governing status, a benefit the company has enjoyed since 1967. Since the bill’s passing, DeSantis has continued to take shots at the company, and the state of animation as a whole.
Ron DeSantis was born in 1978, meaning he was nine years old when Disney released Who Framed Roger Rabbit https://t.co/0WERSCUBhu pic.twitter.com/N0oNypTmha

Geoff Morrell is leaving his role as chief corporate affairs officer at the Walt Disney Company.

How have his comments been received? During his Fox News segment, DeSantis received a standing ovation from the audience. After his comments in Las Vegas went viral though, a myriad of examples countering his arguments about the sexualization of cartoons have flooded social media. The governor’s detractors posted clips from decades-old classic cartoons in which Bugs Bunny crossed-dresses and seduces other male characters; scenes of Pepé Le Pew committing blatant acts of sexual assault; and comic artist/writer and illustrator Kyle Smeallie did a quick bit of math to point out that DeSantis was nine years old when a hyper-sexualized Jessica Rabbit made her big screen debut.
“When we were young, you could watch cartoons without having to worry,” the 43-year-old governor bemoaned. “Now parents have to sit there and worry about, ‘What are they trying to inject in?’ ‘What type of ideology are they trying to pursue?’ And that is wrong.’”