Adam Wingard, director of 2021’s Godzilla vs. Kong, will be back to helm its follow-up, which will mark the fifth entry in Legendary’s ongoing “Monsterverse” — comprised of 2014’s Godzilla, 2017’s Kong: Skull Island, 2019’s Godzilla: King of the Monsters, and Wingard’s most recent installment. Dan Stevens, who previously collaborated with Wingard on his 2014 thriller The Guest, was recently confirmed as a star.
And back in January, Apple TV+ announced its order of an original live-action Godzilla series set within Legendary’s Monsterverse. An early synopsis for that in-the-works project reads: “Following the thunderous battle between Godzilla and the Titans that leveled San Francisco and the shocking new reality that monsters are real, the series explores one family’s journey to uncover its buried secrets and a legacy linking them to the secret organization known as Monarch.”
With the new November premiere now set, Dune: Part Two will share its opening week with Lionsgate’s Hunger Games prequel, The Ballad of Songbirds and Snakes, and Universal’s Trolls 3.
Villeneuve is returning to direct Dune: Part Two, and the film is scheduled to begin filming later this year. Florence Pugh, Austin Butler, and Christopher Walken are all set as to join the film, with Timothée Chalamet, Rebecca Ferguson, Zendaya, Josh Brolin, and Javier Bardem reprising the roles they first played in the two-part saga’s first chapter.
A Dune prequel series for HBO Max is currently in the works. In April, it was announced that Chernobyl director and executive producer Johan Renck would helm the first two episodes of that show, after Villeneuve bowed out of directing the pilot due to scheduling conflicts.
Warner Bros. and Legendary accompanied their delay announcement with another update — that their still-untitled Godzilla vs. Kong sequel now has an official theatrical release date: March 15, 2024.

Both franchises are also making pushes into TV. 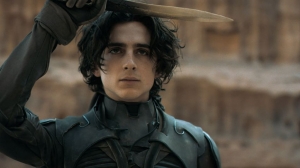