Kinder concurs, “A lot of it looks rough. You’d be amazed at how crude some of this stuff looks before it gets polished. And that’s an important lesson about what the editor is doing. They’re taking this raw material that’s in such a brutish form, honing it… and building on those good ideas.”
Both Kinder and O’Steen credit Lee Unkrich as being a huge proponent of how central the editorial department would become at Pixar. As Bobbie recalls, “He went to cinema school and the irony is he was hired because he knew Avid, but his knowledge of cinema was invaluable because the original brain trust, the original creative team at Pixar, they didn’t have any cinema background.”
It’s easier to show than it is to tell, and that’s one limitation of a book  about editing. To overcome that hurdle, the authors have provided access to a huge array of projects from the Pixar vaults in a digital component which is included with a purchase of the book. Readers are granted access to look through actual story reels from throughout the editorial process from across the years of Pixar production.
For more information on Making the Cut at Pixar: The Art of Editing Animation, visit their site: www.makingthecutatpixar.com
[embedded content]

Due to that lack of cinema experience, Kinder recalls, “When they were planning Toy Story, there was a lot of thought given to not having an editor on the crew.”
Those who work in animation understand that the editorial team is involved from the initial stages of production as they begin putting together the story reel. Kinder and O’Steen take that understanding even deeper in their writing and unveil the complexities of editing animation.
As O’Steen explains, “They have to create the rhythm of interaction, but they can also manipulate it in the most microscopic way. So the dialogue editing was the first thing that really blew my mind… [and] they have to figure out simple things like how many steps to walk across a room.”
“There’s a chapter in the book about the warrior mentality and the kind of endurance and marathon spirit that is demanded of editors,” Kinder explains. “They have to understand the initial spirit of the story and then protect that and carry it forward. Often for years, as everybody knows these animated films take many years.”
Veteran Pixar editor Bill Kinder (Finding Nemo, Wall-E) explains how the studio’s editorial department was more like the “hub of the wheel” which connected multiple departments throughout the production of its animated features.
Throughout the book, the authors highlight the endurance needed of an editor.

“If you think of each department as a spoke on that wheel, as opposed to a segment in the pipe, you have a much clearer image, a much more accurate image of what the editor is doing in the center of the wheel.”
“Everyone calls it a pipeline, and that means you put something in the pipe at this end and it comes out the other end. But it’s kind of a broken metaphor in animation, really.”
Kinder explains, “Part of the mission of this book was to be able to share the actual story reels for Monsters, Inc., Toy Story, Toy Story 3, for a range of these films. What they actually look and sounded like in the editing room, which is not something that we ever were able to share on those DVDs for all kinds of commercial, technical, and other reasons.”
We recently sat down with Kinder and Bobbie O’Steen (The Invisible Cut: How Editors Make Movie Magic, Cut to the Chase: Forty-Five Years of Editing America’s Favorite Movies), co-authors of the new book Making the Cut at Pixar: The Art of Editing Animation. Watch our discussion here:
In addition to an array of editors, the writers also interviewed Unkrich for the book. Kinder explains that when Unkrich was hired at Pixar, “He realized quickly that this 3d thing, the CGI thing was different from all the 2d stuff that came before, and he could throw that rule book out the window and help remake this style, this approach to filmmaking with these new new tools.” 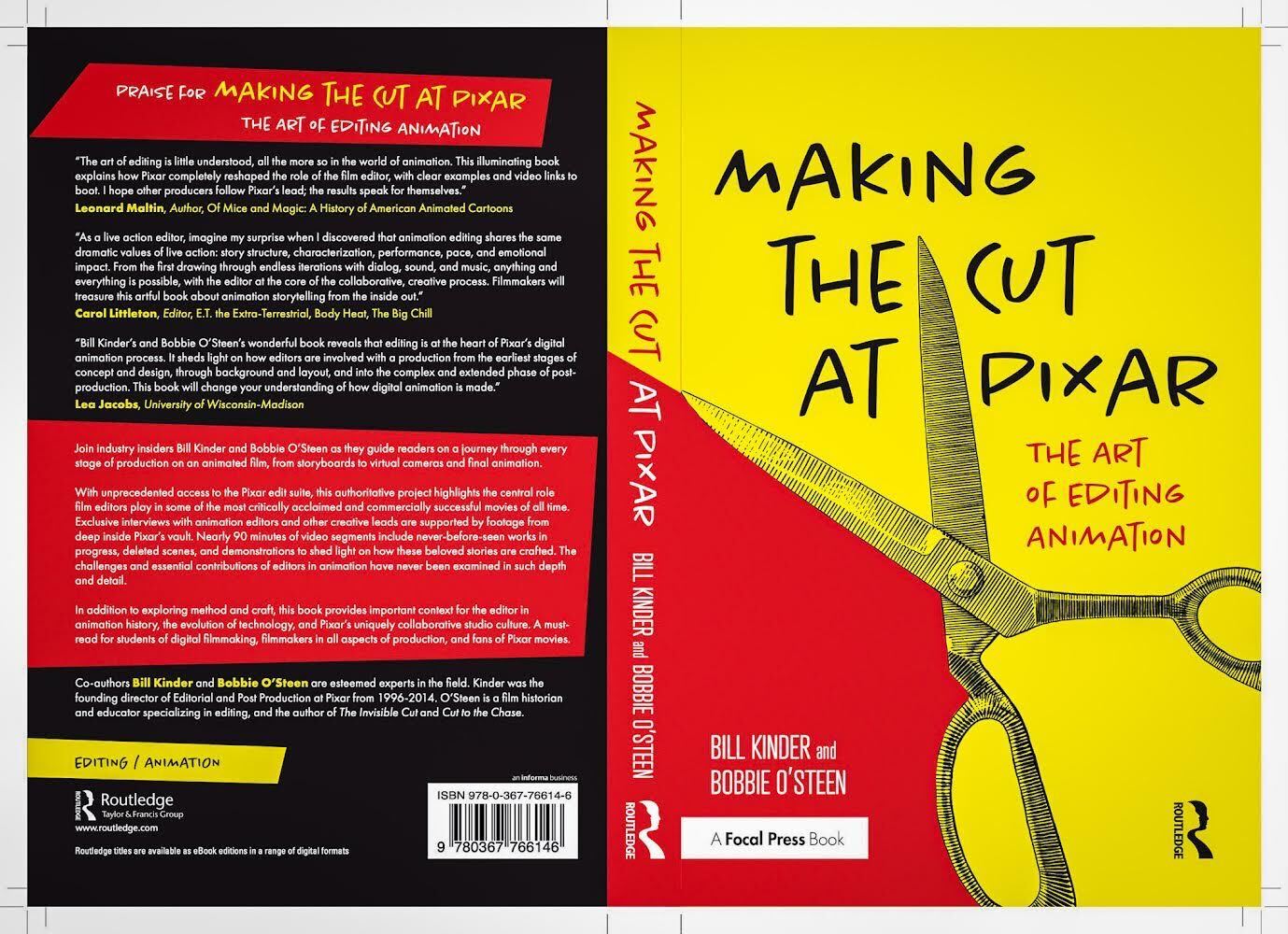