Each distinct art style will signify a different universe, three of which producer Christopher Miller was able to reveal. “Earth-50101, which we’re calling ‘Mumbattan’ – that’s based on an Indian comic-book look – and [the second is] Nueva York from Spider-Man 2099’s world. That’s based on Syd Mead-style illustrations of what the future might look like. There’s also Gwen’s world, which is Earth-65. And that was a watercolor-wash style that’s reminiscent of the covers of her comic books.”
Spider-Man: Into the Spider-Verse was a critical success, with a groundbreaking animated visual style that garnered the film an Oscar for Best Animated Feature Film. Now, the hotly anticipated sequel, Spider-Man: Across the Spider-Verse, is looking to up the pixel-pushing ambition ante with six different art styles.
Initially scheduled for an October 7, 2022 theatrical release, Across the Spider-Verse has been pushed to hit cinemas June 2, 2023.
“The first film had one animation style that dominates the movie. This movie has six,” reveals producer Phil Lord to Empire. “So, we’re taking those tools, adding all the things we learned on The Mitchells vs the Machines, and then growing them further to accommodate the ambition of this movie. Which is to wow you every time you enter a new environment, and also to make sure that the style of the movie reflects the story, and that the images are driven by feelings, as opposed to some egg-headed art project. Which it also is, by the way!”

Across the Spider-Verse will see Into the Spider-Verse hero Miles Morales (Shameik Moore) and Gwen Stacy (Hailee Steinfeld) hop between alternate dimensions as they face down a new villain. Joaquim Dos Santos, Kemp Powers, and Justin K. Thompson are co-directors of the film, which is written by Lord, Miller, and David Callaham. Avi Arad, Amy Pascal, Lord, Miller, and Christina Steinberg are producing. 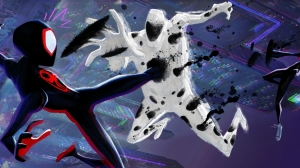