Dan Sarto is Publisher and Editor-in-Chief of Animation World Network.
“We lost a lot of our crew because of COVID-19 delays,” says Pellar. “We still had a job to do and a show to finish. There was no room for failure. We were facing uncertain times, and if we lost revenue because we couldn’t deliver, it could be catastrophic. Our team buckled down and got the job done. It was extremely challenging. We worked seven-day weeks, 16-hour days. We did it to ensure that there would be a studio to come back to when the pandemic was over. As did every other team on every other show at all our facilities around the globe. I’m proud to say that at PXO, we truly have the best in the business.”
“Programmable Matter was used on weapons, props, and ships, so we had to come up with a versatile workflow and distinct look that would suit the Star Trek aesthetic,” CG supervisor Fausto Tejeda adds. “The Discovery ship itself got a major overhaul, which now relied on programmable matter, a new form of technology in the Trek universe. There were new creatures that were fun to design and introduce. This season also introduced Book’s ship. Aside from having the ability to cloak itself, it can also rearrange its paneling and parts to create new forms for different capabilities. Entirely new worlds filled with parasitic ice, hollow planets, and floating markets were some of the few challenges we had to tackle this season.”

In Season 3, the crew of the U.S.S. Discovery lands in an unknown future far from the home they once knew. Now living in a time filled with uncertainty, the U.S.S. Discovery crew, along with the help of some new friends, must work together to restore hope to the Federation.

Noting how the pandemic affected the production, Jones reveals, “Fortunately, the live-action shoot in Toronto had wrapped about two weeks before we went into lockdown. Editorial was already working on all episodes, and plates were available and coming in constantly.  Pixomondo Toronto transitioned all artists to work from home within approximately one week. The adjustment to working remotely, not surprisingly, took a bit of getting used to.  One thing that helped us make the transition smoother was to have a video conference up and running all day (and sometimes all night).  In addition to our regular dailies sessions, all the leads stayed on the call, and anyone could join in when there was something difficult or time-consuming to take care of over email or chat.”

Compositing supervisor John Dinh concurs, adding, “This was one of the most rewarding sequences since it involved a lot of lookdev and development. Our asset team did a fantastic job with all the details, and by the time it was passed down to our comp department, it gave us more flexibility to accurately develop the lookdev envisioned by our client. Our comp department was deeply involved in the development of the energy beams/energy field bubble. With the concepts/storyboards supplied by the client’s art department, we had to find a creative way to apply these ideas to introduce the New Federation Headquarters and multiple recognizable ships from the Star Trek franchise.”

“In addition to the many new ships created for the future, we also developed some technology updates,” Jones shares. “For example, Discovery’s viewscreen read outs were all a 2D composite effect in previous seasons. We had multiple setups in Nuke for the various lighting and alert scenarios, and these were used only in the old Discovery. For the new Retrofit Discovery, Book’s ship, and Federation HQ, the view screen elements were upgraded to use full 3D elements with much more animation and presence than in previous seasons. Due to the vast number of shots with the viewscreens, we developed 3D setups in Nuke that were relatively quick to add into the numerous shots.  The compositors spent quite an amount of time on each shot integrating the elements into the screen and ensuring it was added into the many reflective surfaces present on the ship’s bridges. Each ship had their own unique readout that was shown on both the full CG ships from outside, and in the practical sets. Each ship and viewscreen was built according to CAD drawings and then adjusted based on the practical Lidar scans of each bridge, so we could use the same setup in any situation.”
Pixomondo also had to create the Federation Headquarters environment seen in Episode 5. “The Federation Headquarters was populated by 15 new ships – all modeled by PXO – within a bubble forcefield generated by a corkscrew-looking space station that served as the main base,” VFX producer Matthew Pellar describes. “We worked closely with the client to match and then improve upon the terrific concept work provided by the art department. We also had to be careful to keep track of what ships were in what position – callsigns on the ships needed to maintain continuity, or eagle-eyed fans would wreak havoc online. *Spoilers* Because of the time travel into the 32nd century, this was the first time in Star Trek: Discovery’s run that the show could generate new cannon and not have to back into pre-established designs from 50 years ago. The show could design whatever it wanted and did just that. It was months of work to bring these new concepts to life, and the results speak for themselves. We’re very happy with how the Fed HQ turned out.”
In Episode 2, Discovery crash-lands on a planet filled with parasitic ice. The biggest challenge here was generating a look that was both refreshing and menacing. “It had to maintain the same beautiful icy look as what was filmed in Iceland but had to communicate to the audience that it was in fact a threat to the crew,” Tejeda explains. “At sundown, the ice would start to grow and cover the hull of the Discovery, so we had to ensure continuity through the sequence and pay close attention to the speed and location of the ice. We come to find that the ice is sentient; we see ice tentacles grow out and grab the ship as it’s trying to escape. Getting the look and growth of the tentacles was very challenging, due to the time constraints, as it was something we had to generate towards the end of our timeline. We couldn’t just make them look like regular tentacles or growing ice. It had to feel menacing. It took some R&D to come up with a look we were all happy with. Ultimately, it ended up being a lot of hand animation for the ice movement which then triggered specific blendshapes at various stages.”
A new “programmable matter” control system seen on the console of Book’s ship began with a concept from the Art Department, which the team expanded upon after receiving the first plates. “The challenge was taking a still concept and getting it to look and move believably,” Jones says. “We utilized the base shapes seen on the control panel, tracked the actor’s hand movements, and put that into a system we built in Houdini to create the base simulation for the controls. Some shots required hero button pushes to be hand animated to appear just before the actor ‘pushed’ them.”
Source: Pixomondo
Season 3 required heavy VFX work; every episode had at least one, if not two or three big VFX sequences for the studio, starting with the exciting opening episode, which began with the character of Book being chased through a debris field surrounding an unknown planet. According to VFX supervisor Phil Jones, “This sequence required many new asset builds for all the ships from the future as well as many destroyed Federation ships and their debris surrounding the planet.  There were only a few assets that were re-purposed from previous seasons. The Discovery was one of them, but it was only used for a few episodes before we had to ‘refit’ it with all the new future technology.”

Leading design company Pixomondo has just shared with AWN another excellent VFX breakdown reel, supported by images and background information, of their work on Season 3 of the hit Paramount+ sci-fi drama, Star Trek: Discovery. With work spread between the lead Toronto facility and teams in Stuttgart, Montreal, and Vancouver, Pixomondo delivered 570 shots for the series. The show has been renewed for Season 4, which will air some time late 2021. 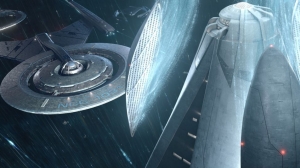