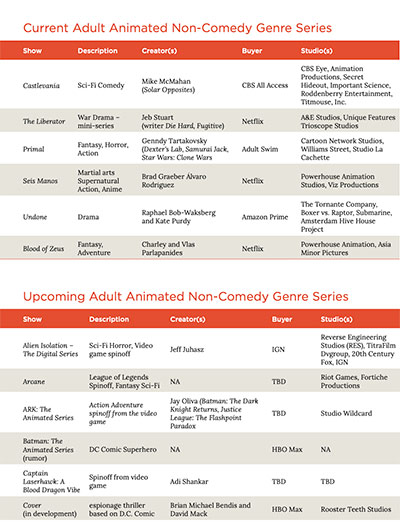 Evershed’s research “shows very few international studios actively producing for the adult animation buyers” at the moment. Thanks to the above trends, that could change. Evershed thinks French studios are especially well placed to co-produce dramatic adult animation: “Their creators grew up on a steady diet of anime and you can see it in their work.”
American studios are at full capacity due to the sheer demand for adult animation. Meanwhile, a growing number of countries are implementing laws that require streaming companies to invest in a certain amount of local content. Finally, non-comedic shows are less culturally specific than comedy; if their number continues to grow, there could be more potential for overseas studios to work with American producers.

Japanese studios can’t keep up with the booming global demand for anime, notes Evershed. This presents an opportunity for Western studios (which, according to Evershed, are often nimbler than their Japanese counterparts) to produce shows that look and feel like anime, of which we’re seeing a growing number. This in turn could make Western animation producers more open to dramatic storytelling, which is common in anime.
Comedy still accounts for the majority of adult animation: 60% of all upcoming series. But Evershed predicts that “non-comedy genre shows” — sci-fi, fantasy, horror, etc — are “where much of the growth in new audiences for adult animation will occur over the next decade.”
Image at top: “The Midnight Gospel,” which premiered on Netflix last year
Evershed points to the recent success of dark, serious series like Adult Swim’s Primal and Amazon’s Undone. He adds that almost all upcoming shows based on video games or comics, or Western-produced “anime,” fit this label.

There are now 10–15 series based on video games in production, up from only two the year before. Netflix is a big buyer of these: its upcoming adaptations of Cyberpunk 2077, Overwatch, and Splinter Cell are just three examples.

2. Reboots and spin-offs are a disproportionately big part of this.

We’ve previously reported on the reboot mania — particularly at ViacomCBS — but Evershed puts numbers to it: there are at least 15–18 reboots and spin-offs in development or production, although only one was on air at the time of the report’s writing (CBS Studios’ Star Trek: Lower Decks).
The full document can be downloaded for free from the website of Toon Boom, which sponsored the report. “Despite the importance of adult animation to SVOD providers, there has been an absence of industry analysis dedicated to this expanding category of productions,” said Stephanie Quinn, Director of Marketing at Toon Boom Animation. “We sponsored John Evershed’s research to help make that information widely-available, and to help creators pitch their next groundbreaking projects.”

3. Animation producers are turning to video games for material.

A year ago, we covered the release of a white paper that surveyed North America’s fast-growing adult animation production. The author, John Evershed, has followed it up with an even more comprehensive report that looks at how the scene evolved in 2020.
There are 103 or 104 upcoming adult animated series as of February 2021. A year previously, there were 50 series in the works. The number has more than doubled in 12 months. Half of all upcoming series were ordered by streaming platforms.

“There’s a generation of video game players who have grown accustomed to in-game cinematics,” writes Evershed. “As a result, there’s built-up pressure from these massive gaming communities to see their favorite characters come to life in longer, linear formats.” Comics are also an increasingly fertile source of IP.
Evershed suggests animated spin-offs from live-action properties are lower-risk than live-action ones, as they are often cheaper, and the medium clearly demarcates them from the original property. He quotes Screen Rant writer Craig Elvy: “A poorly-received animated spin-off is far less likely to damage the brand than a live-action one.”

6. International studios stand to benefit from all this.

Like last year, the report looks only at series, both currently on air and in development/production. It omits Japanese-produced shows — although it does pay close attention to anime’s influence on non-Japanese animation.
This year’s Adult Animation White Paper extends last year’s argument, asserting at the start: “The ‘Great Adult Animation Boom’ is in full swing.” This won’t be news to readers of Cartoon Brew: over the past year, we have chronicled the growing importance the major studios place on older audiences.

To discuss trends in adult animation, Toon Boom Animation also invited a panel of guests from Adult Swim, ShadowMachine, Powerhouse Animation, Echo Bridge and Crunchyroll to participate in an online discussion. The video can be seen below:

But Evershed’s report captures the trend with a broad array of graphs, directories of existing and upcoming shows, and thoughtful analysis. Evershed knows his way around the subject: as the head of High Concentrate and former CEO of Mondo Media, he is experienced in the production, distribution, and sale of animation for adults and young adults. The report is very much written in his voice, combining solid research with dollops of informed opinion.