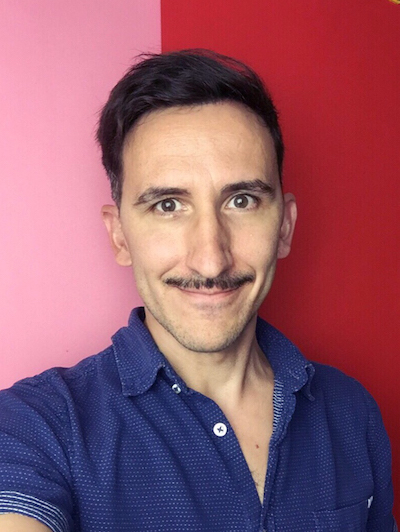 The tool of choice was Blender, the number one open-source 3d authoring program in the known universe. We used it to model and render the backgrounds, as well as some of the comp tasks.

Shotgrid (formerly known as Shotgun) is the standard production management tool. It has allowed us to keep track of the status of the nearly 10,000 shots, and thousands of backgrounds and assets. It has also enabled us to coordinate the work of the teams in Helsinki, Barcelona, Ireland, and Belgium, as well as reviews for most parts of the process. Behind its initially overwhelming interface, there is a powerful tool that provided us with control and flexibility to build a pipeline adapted to our hybrid production.
We kept our communications and documents within the Google suite. Slack and Discord provide a much better user experience than Google Chat, but we deliberately chose to favor Chat to simplify and reduce the amount of tools and environments the team would have to depend on.

Pablo Jordi: Royals Next Door is our top creative effort to date at Pikkukala. Created and directed by Veronica Lassenius, it tells the story of a royal family that moves to a normal house. And it is coming out very funny!
The downsides of Shotgrid are its high price, the lack of better integration with tools like Blender, and the difficulty of setting up a remote asset management system, which could have been handy with all the remote work in the pandemic. We worked around that with a strict naming convention and cloud storage services like Google Drive. The recent transition to Autodesk has unfortunately bumped the price up even more, which seems to create an excellent opportunity for more affordable alternatives like Kitsu.
Google Drive was our best alternative and it worked out-of-the-box-ish with the already existing users. By the time we had decided this, the Irish team working on the live shooting and cg backgrounds had already settled for the combo Slack + Dropbox. So I guess we ended up being a bit “hybrid” for that part of the production as well. 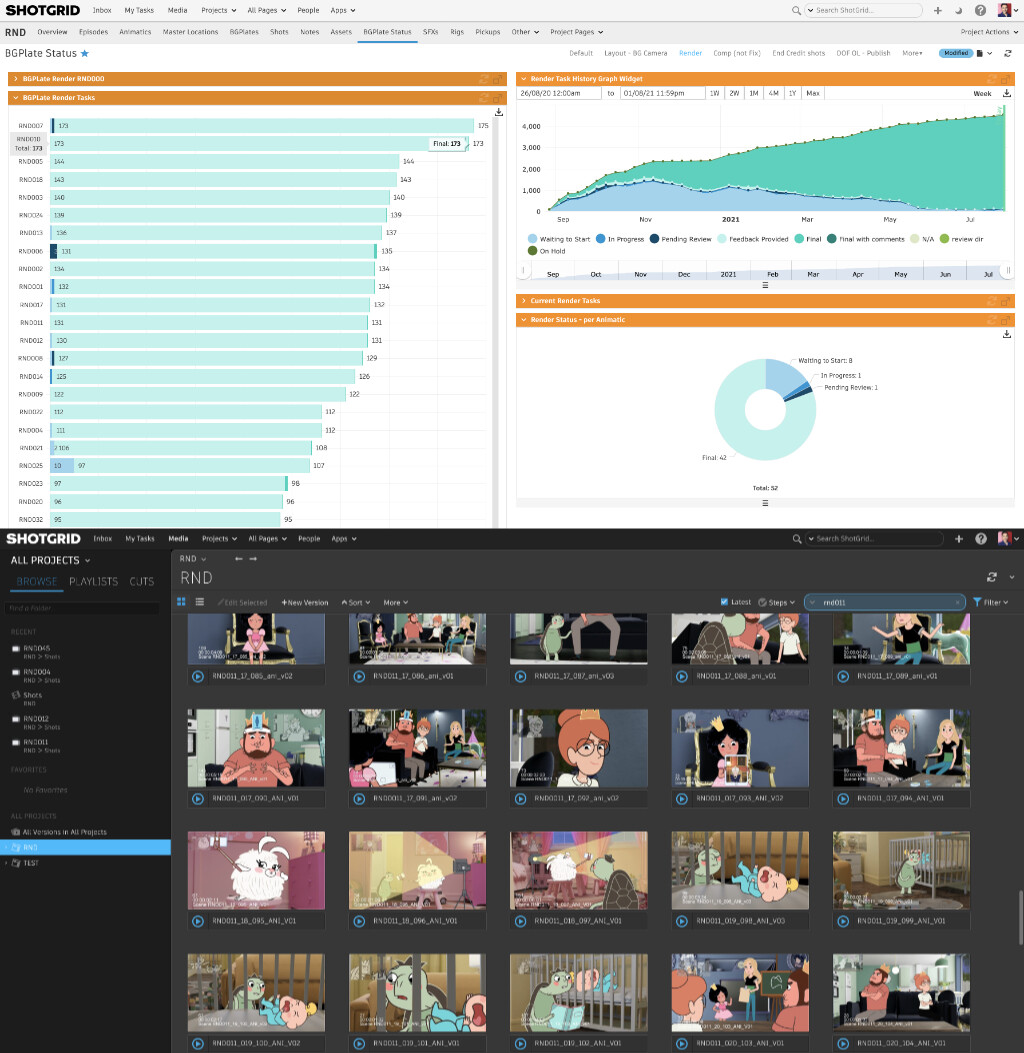 Backgrounds. No shoots? No problem.

When the pandemic broke and forced us to work as distantly and distributedly as possible, we first tried some syncing solutions like Syncthing. These could have been perfect for a smaller, more technically oriented team, but they required too much maintenance.
I had worked with Shotgun before, but this was the first time I built the pipeline from the ground up as opposed to jumping on a moving production with a strange pipeline structure no one owned, with too many tasks. It pays to design the pipeline in advance, consider the review flow, customize entities you will need, etc. 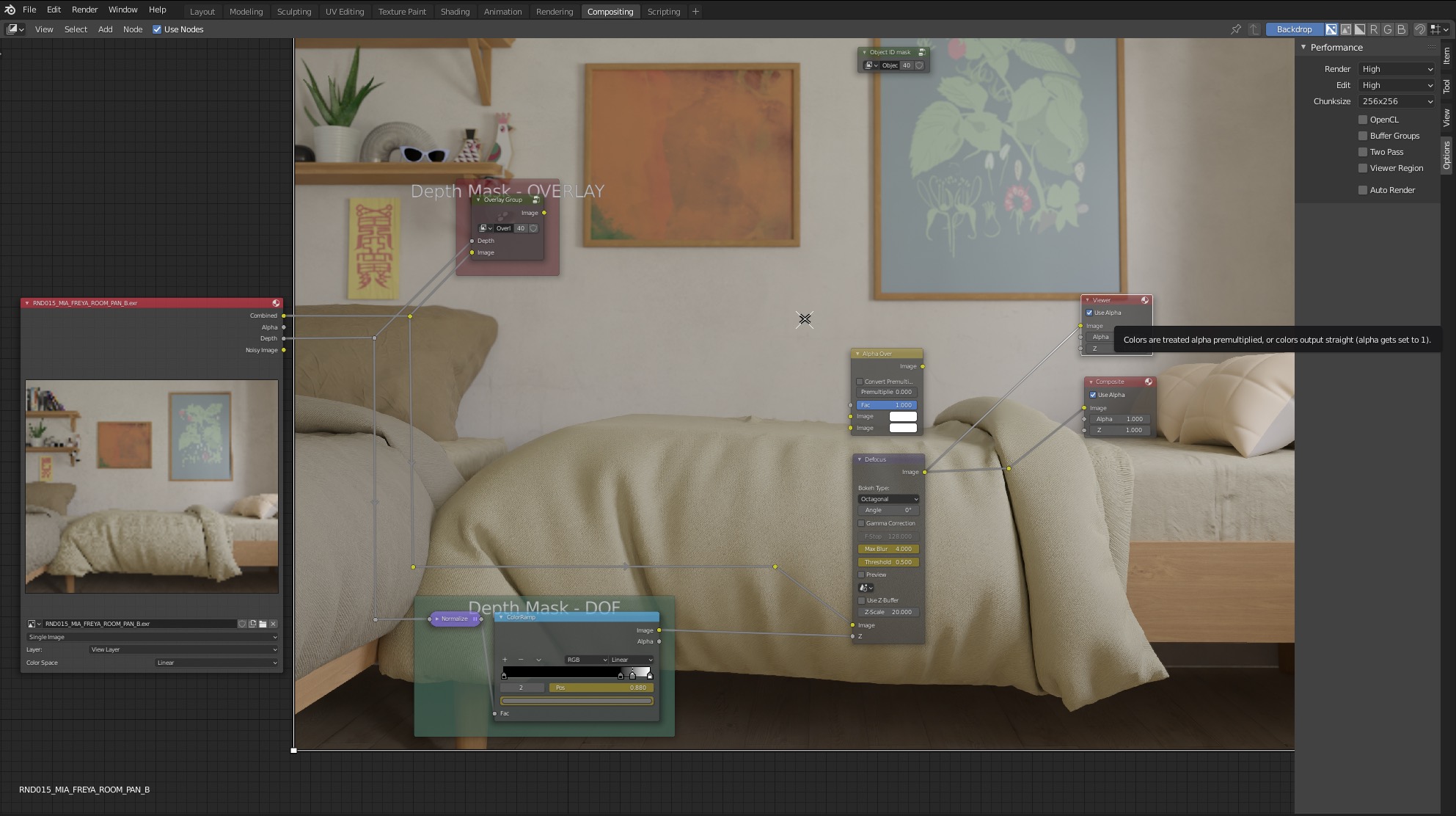 We use Syncsketch’s ability to screen materials together remotely and without latency in our weekly meetings on Fridays, when the whole teams in Pikkukala Helsinki and Barcelona meet and share the progress on the latest episodes of the series.

A radical change of pipeline in the middle of production is generally not a great idea, and brings delays and extra expenses. Ironically in our case, the shift to cgi became an opportunity that gave us more control over the aesthetics of the locations and the cinematography of the series without losing the unique effect of mixing 2d and realistic backgrounds. It also gave us the chance to test Blender in a real-life production.

Simplicity and clarity are paramount in a production of this caliber. Productions are living processes, so no matter how you strive for simplicity, things will get complicated!

We also kept using Syncsketch for the reviews of storyboards and animatics. Its modern interface is friendlier than the one Shotgrid has, is better for reviews of full sequences or episodes, and worked great for remote reviews.
Shotgrid is great for reviews and notes on individual shots and assets because it provides context. We use it extensively to discuss the multiple intricate elements of the shots, keeping everything clearly in order.
In future projects, it would be nice to build an integrated pipeline in Blender to create the storyboards, 3d layout, and 2d animation in the same environment. This approach would make our lives simpler on a hybrid production like this.
From the beginning, one of the most immediate charms of Royals Next Door was its hybrid style combining photographic backgrounds and 2d character animation. This technique represented an interesting technical challenge, as — surprisingly enough — there are not that many antecedents with this combination. Following the outbreak of the Covid-19 pandemic, the possibility of shooting live backgrounds was limited and unpredictable, so we turned to cgi for 99% of the locations, with the exception of Malahide Castle in Ireland, where Queen Mother lives in the series. 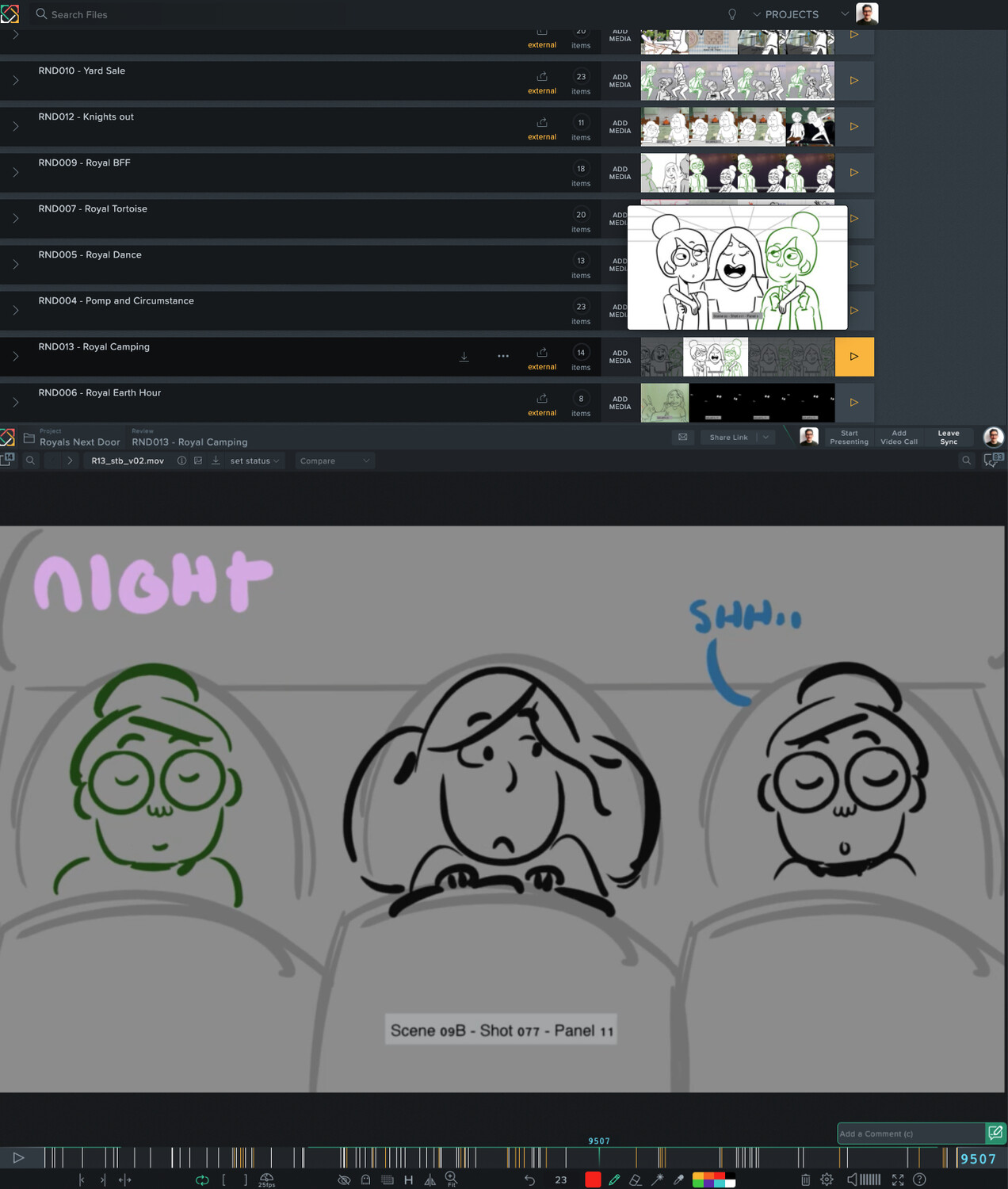 We continued to use Vimeo to update on the status of the episodes to stakeholders and parts of the team who didn’t need an expensive Shotgrid seat.
For storyboarding, animation, and the rest of the comp we used Storyboard Pro, Harmony, and After Effects. These are industry standards, so no big surprises here.
So far in our series Tools Of The Trade, industry artists and filmmakers have spoken about their preferred tool on a recent project, whether digital or physical. This week we’re tweaking the format: below, producer Pablo Jordi talks about the entire suite of tools his team has been using on Royals Next Door, an upcoming kids’ series which combines 2d animation with mostly cg backgrounds. The European co-production is entering the final stages of production and will premiere on Ireland’s RTÉ in November, followed by dozens of other countries in 2022.

As the producer, I am very proud of the artistic achievements of the whole team, so I talk about it often. But Royals Next Door is also our most ambitious animated series ever in a technical and operational sense. The production entails a high volume of high-quality animation (52 episodes of 11 minutes — the equivalent of more than six feature films!). It involves four production companies in four countries (Pikkukala in Helsinki, Finland and Barcelona, Spain; Ink and Light in Ireland; and Walking the Dog in Flanders, Belgium) and almost two hundred artists, writers, performers, technicians, and other professionals. It also happens to have a beautiful mix of 2d animation and cg backgrounds.