The team had to create their own “glitter engine” to facilitate it’s dispersal to ensure the glitter moved naturally with the characters as they danced. The initial plan was to create simple 3D glitter cannon FX, render those as elements and have 2D track them in, but GKS’ head of 3D and CG supervisor on the show, James Sutton, had another idea.
As the hallucination effects kick in, the characters find themselves in a vibrant jungle with various colors, where animals speak and dance with them. “The director initially sent over several references for how they wanted the effects of this hallucination to look and what the characters would see,” said Halverson. “They were keen for us to come up with something that hadn’t been done before, so we had to get creative when showcasing the main character’s point of view.”
To conceptualize the shots, the team used DeepDream, a computer vision program created by Google that uses AI and machine learning to generate psychedelic and surreal images algorithmically. However, it soon became clear that although the images had the trippy effects the team were looking for, the quality of the visuals wasn’t high enough. “It only worked with JPG or PNG formats and nothing higher than 8-bit,” Halverson explained. “We managed to expand the file size up to 2K and 16-bit depth, but it just wasn’t designed for what we needed it to do.”
Take a look at the film’s trailer:
“My next approach was to take the DeepDream visuals and use Nuke’s SmartVectors to stick them into the jungle scene created for the sequence,” Halverson said. “The characters are dancing in this dreamt up jungle and we used the SmartVectors to glue the effects on the canopy’s leaves and trees. It took a lot of iteration to really capture the feeling of this psychedelic experience that the director was going for, but it was worth it. We did as much work on that sequence as we did with all our other shots combined – it was at least half of the work done, if not more.”
Source: Goodbye Kansas Studios
One of the film’s earliest scenes follows the protagonist as she joins her classmates for a night on the town after their first day of ballet school. After entering an underground club, the group ends up on a wild hallucinogenic trip after consuming a worm that has been laced with an unknown substance. Designing and producing how both characters and the audience would perceive this drug-induced experience was the VFX team’s first major challenge.
As the majority of the filming took place in Budapest, the GKS team was tasked with transforming the cityscape into Paris, where the story is set. The work involved rebuilding the city’s skyline as well as substituting various buildings for some of the film’s Parisian landmarks, like the ballet school and the Palais Garnier, home of the Paris Opera. “The opening shot of the film features the Paris skyline and has our main character dancing in her bedroom window,” said Halverson. “That was where we started the transformation process.”
“Amazingly we found a building in Budapest that had a similar facade as the Palais Garnier,” added Pope. “Making it look like it’s Paris was the easy part. The hard part was creating the streets on either side of this building because it was flanked by a river on one side and a narrow street with a bunch of trucks on the other. Our solution was to recreate some of the neighboring buildings with high-res photography and reprojection and then stick in some moving people to give it life.”
Led by VFX supervisor Jason M. Halverson and VFX producer Paula Pope, the VFX house was the primary vendor on the production, in collaboration with Studio OMZ. The project was GKS’ first it both started and finished during the pandemic.
Goodbye Kansas Studios has shared with AWN its recent VFX work on Prime Video’s Birds of Paradise, released September 24 by Amazon Studios.  GKS delivered 64 shots and 5 assets for the recently released film, an adaptation of the novel “Bright Burning Stars” by A.K. Small that follows two dancers at an elite ballet academy in Paris who find their friendship tested when they compete for a contract to join the Opéra National de Paris.
“Some of the most visually layered sequences in the film were led by Goodbye Kansas in collaboration with Studio OMZ,” said Sarah Adina Smith, the film’s director. “I tend to be pretty particular about VFX, so I felt lucky to have Jason Halverson and his team on board. They were always down to keep pushing the quality further and never broke a sweat.”

“We wanted glitter to feel like it was coming directly off the dancers in 3D space without having to invest in painstaking 3D rotomation for each character in every shot,” he noted. “So, we set about to develop a tool that used the 2D roto we already had and project that in 3D space to drive the glitter emission to follow the silhouette of the dancers. We then enhanced this by emitting glitter driven by rotomation for key movements such as sweeps and flicks. This combination meant that we were able to greatly reduce the amount of detailed 3D rotomation needed, saving the team a lot of time and energy.”
Another key element of the team’s work on this scene was the creation and distribution of glitter from the character’s bodies as they danced around the room. Real glitter was used on set while filming, but the director wanted even more. According to Halverson, “It was really about taking everything that was already there and making it look idyllic and over the top. We removed the dancer’s marks from the floor to make it perfectly black before getting to work. We even had samples of the glitter so we could match the iridescence of it – you couldn’t have two completely different looking glitters sitting on top of one another – but the real challenge was getting the glitter to look as if it was emanating from the character’s themselves.”
“From the plates the team provided, we narrowed down where exactly in the city this would be so we could create a 3D DMP of the foreground to create parallax on the buildings,” he continued. “We also added movement in the windows and steam coming out of some of the apartments to make it feel more life-like. That’s actually one of my favorite things to do in VFX, to fool the viewer into thinking they’re looking at something that was filmed with a camera. The team also had to recreate the city’s famed Palais Garnier, where our character eventually performs towards the end of the film.” 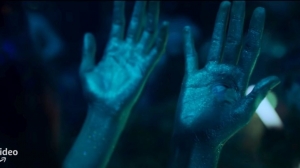