Belle’s Japanese creative team worked in collaboration with a roster of international talents. Character designer Jin Kim (Moana, Tangled, and Frozen) designed the titular Belle. Cartoon Saloon’s Oscar-nominated Tomm Moore and Ross Stewart (Wolfwalkers, Song of the Sea, The Secret of Kells) contribute artwork for the various virtual fantasy worlds within the film. Hosoda continues his film collaborations with architects, and was joined by British architect and designer Eric Wong, who designed the virtual world of “U.” Rounding out the team, composer Ludvig Forssell (Death Stranding, Metal Gear Solid V), helped score the film.
After the film’s world premiere at the Cannes Film Festival, and its North American premiere at the New York Film Festival, it also played in competition at the London Film Festival, as well as at Fantastic Fest; its west coast premiere was this past week at the Animation is Film festival.
Hosoda previously told Variety, “Belle is the movie that I have always wanted to create and I am only able to make this film a reality because of the culmination of my past works. I explore romance, action and suspense on the one hand, and deeper themes such as life and death on the other. I expect this to be a big entertainment spectacle.”
Source: GKIDS
Belle premiered in Japanese theatres July 16th and is already Hosoda’s highest-grossing film, beating the lifetime gross of his 2015 feature, Boy and the Beast. Unfortunately, we will have to wait until next year to enjoy the beautifully animated film from the celebrated Academy Award-nominated director that brought us Mirai, The Boy and the Beast, Wolf Children, Summer Wars, and The Girl Who Leapt Through Time.
Sam is a part-time English instructor, journalist, and full-time fiction writer, and if he writes one more word, it will be the most he’s ever written.
[embedded content]
Catch the two new teaser trailers for glimpse into Hosoda’s animation mastery:
[embedded content]
Belle tells the fantastical, heartfelt story of growing up in the age of social media. The film centers on Suzu, a shy high school student living in a rural village. For years, she has only been a shadow of herself. But when she enters “U,” a massive virtual world, she escapes into her online persona, Belle, a gorgeous and globally-beloved singer. One day, her concert is interrupted by a monstrous creature chased by vigilantes. As their hunt escalates, Suzu embarks on an emotional quest to uncover the identity of this mysterious “beast” and discover her true self in a world where you can be anyone. 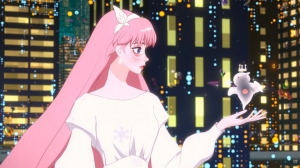