Christian Linke: We’ve both been with Riot, League of Legends, for so long. Alex has been at Riot for 12 years and I’ve been there for 11 years. And Vi and Jinx were characters that, even when being made for the game – and we were part of those teams working on them – they just felt really special. It felt like they had a different attitude, different tone, different voice, than the typical fantasy genre that you just see a lot in games. When you ask yourself, ‘Do you want to stick with these characters for years to come?’ it was an obvious choice for us. These sisters have a really rich relationship that’s meant a lot to us.
CL: It’s hard to say. The video game curse has been a thing for a long time. And I think, to your point, we’re just now getting to this phase where we’re starting to see some things where people go, ‘Well, this actually kind of worked, to everyone’s surprise.’
AY: Depending on how you look at it, you may feel like the game determines an audience. But we didn’t want to change the voice to be tailored to that audience. One of the big rules that we had as we were developing Arcane was making sure that Easter eggs we added never came at the expense of the narrative on screen. We wanted to make sure this story didn’t require you to come with any preloaded knowledge.
Also, you know, as a frequent League player, it might be this big passion of yours, but you have all these friends and family members who are like, ‘I don’t know what that is, and it’s weird that you spend so much time with it.’ So I think this series is also a way League players can share this universe that we’ve lived in for such a long time with people who don’t necessarily want to dig into this giant game. In a lot of ways, it’s a labor of love.
When we built our animation team, basically from the ground up, we were only able to do that because we were able to offer the animators something that they don’t often get to explore, where the silence of a character and their expressions are as important as the words the character is saying. Animation for younger audiences kind of shies away from that. We’ve seen the fidelity of animation in video games become more and more sophisticated every year. And yet, for some reason, in the West, there haven’t really been those deeper explorations in animated series.
VD: Obviously, bringing a video game to life this way can pose certain challenges, when you’re revisiting a world that’s been established in a different medium. What were some of those challenges that you had to overcome in production?
VD: And do you think that’s a mindset shared by other creators? Do you think we can expect more successful animated series adaptations of video games?
Directed by Pascal Charrue, Jérôme Combe and Arnaud Delord, Arcane’s second act (episodes four through six) are set to release Saturday, November 13, with the third act (episodes seven through nine) slated to air Saturday, November 20. This will be Riot Games’ first ever TV series.
VD: There have been so many video games adapted as series in the last couple years, some more successful than others. Now, having created one yourselves, and as builders on the actual League of Legends game, do you think there’s a right and a wrong way to do this when it comes to creating a television show based on a video game?
We recently talked with Arcane’s creators and executive producers Linke – Riot Games’ Creative Director – and Yee – Riot’s Creative Designer – about what prompted them to tackle the award-winning esports game, the challenges of the show’s production, and how they sought to overcome the “video game curse” in their adaptation.
CL: I think we’re now in this golden era, where we’ve reached that age in gaming where we have those folks who probably have also reached that kind of level in their careers where they can shepherd something like this. For Arcane, if we had just done a Hollywood adaptation, it would not be what makes this series special and different. So, I’m hoping that we’re helping usher in that era. I don’t know. That’s up to viewers and fans.

Set in the League of Legends universe and produced in partnership with Fortiche Productions by the game’s developer, Riot Games, Arcane follows the story of two sisters and famous League champions Vi and Jinx, who are torn apart by a growing war between the rich city of Piltover and its seedy underbelly, Zaun. As tensions rise with each city-state developing their own weapons of destruction, Vi’s taste for vengeance grows, along with a drive to rescue her stolen and very changed sister.
Victoria Davis: Just to kick things off, why this game? What drew you to create a series with this story?
AY: Really, everything felt like a new and unique challenge as we built out the show. The nature of League is such that every character needs to be the most embellished version of themselves in order for you to really quickly grasp who they are and what role they play out of all the characters and things happening on the screen right now. So finding both the talent and the tone that would still feel authentic to that, but also have the nuance and subtlety that heightens a narrative like this, required us to think about what’s truly important with these characters. I think we were extremely fortunate to wind up with the cast that we did to help bring this to life.
VD: The animation in the trailer is so polished and beautiful. What goals did you establish early on regarding what the world should look like as an animated series, and how did you want those designs to add to the story?

Alex Yee: League is this world where what you see is just the tip of the iceberg. And the forms in which fans have been able to glimpse it, the character bios and their stories and the little snippets that we’re able to put into the games or in the cinematics, it’s always felt like there’s this wealth of lore and narrative that’s just waiting to be explored. I think it’s both our own desire to have it as an audience, and also being part of these teams and seeing all the love and attention that’s been poured into it over all these years, that really motivates us to expose more of this story in a new way.
Another thing that’s tricky is that this is really the first time that we’re getting to take the camera and go out into the world of Runeterra and actually leave the immediate realm of the champion and see more. Finding a way to make that feel both unique and engaging and immersive, but also not distracting, took a lot of time. There’s a lot of assumptions people have both outside Riot and inside Riot about what things look like, and we had to find common ground.
RESIDENT EVIL: Infinite Darkness, Dota: Dragon’s Blood, Castlevania, and Carmen Sandiego are all series, based on video games, that have released on Netflix in the last couple years. And while such video game adaptations are nothing new, there’s still an incredible amount of excitement that follows a game adaptation that actually lives up to the hype. Because often, they don’t.
AY: We knew we were passionate about the game. We were players, and we’ve grown up with it. So we felt like, if it’s not engaging for us, if it’s not something that we would enjoy, then that’s probably the same reaction that the audience would have.

When you think about big franchises, these adaptations that were successful, usually you have people who are coming at it with a genuine passion. I mean, I just kind of assume that Peter Jackson was a big fan of The Lord of the Rings. I think we’re only now getting to the point where people like Alex and myself are experienced enough to both be genuinely passionate about these games and animations, but also have experiences in our craft to actually make something of this caliber. I think the challenge of video game adaptations was that you always had to hire someone from the outside that didn’t quite grow up with it. It needs to be close to the heart of the makers.
The film and television industries have seen many not-so-great video game adaptations in the past and the pressure is always on when a creator comes up with a new idea on how to adapt a popular, long-standing video game franchise. It was a pressure Christian Linke and Alex Yee felt when they decided to create Netflix’s latest video game-inspired animated series release, Arcane, the first three of nine episodes now available to stream on Netflix.
VD: As this series is such a passion project, how did you take a step back to make sure it appealed to a wider audience, like you say?

CL: In many of our favorite dramas and TV shows, there’s a lot of nuance and subtlety in the acting that you don’t see often in Western animation. And yet, animation has these amazing stories, especially when you think about what’s going on in the anime world. When I think about, ‘What is our version of that kind of animation, where we go deeper on the drama and mature storytelling?’ That was something that we were really interested in exploring. 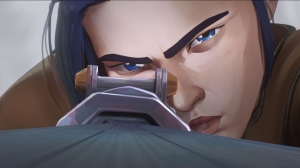