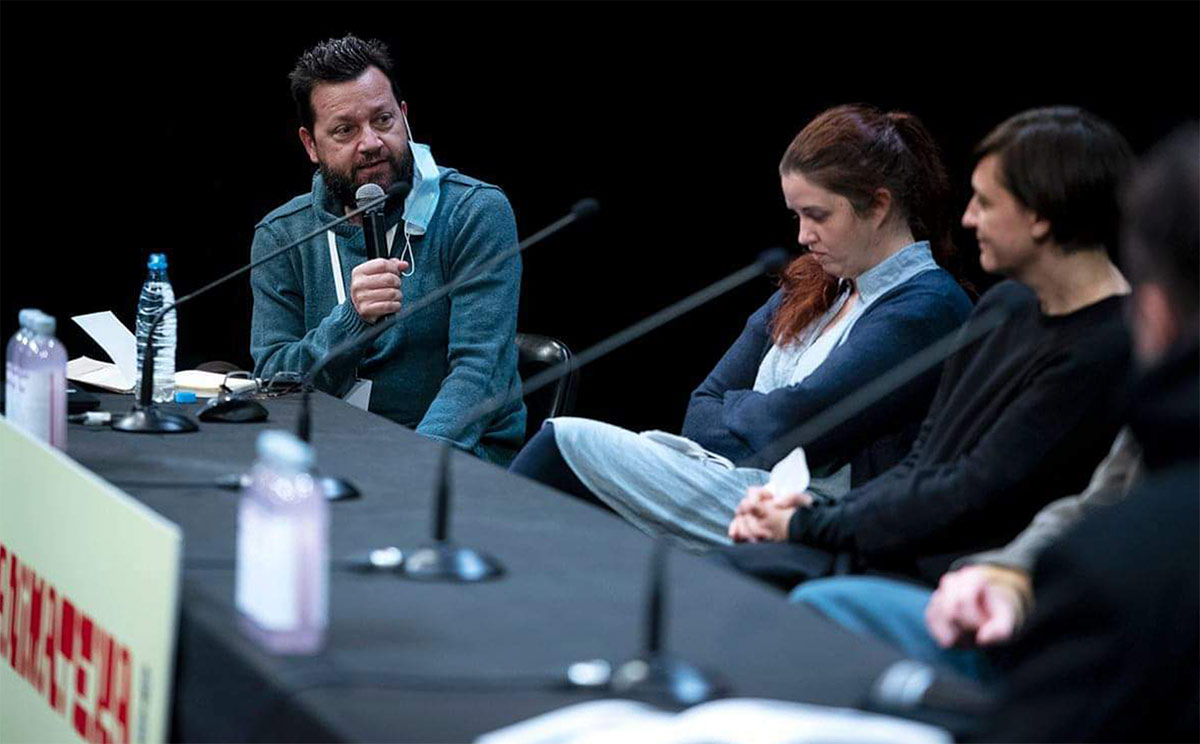 In most ways, it was the same ‘ol Animateka. Lots of familiar and not-so-familiar faces, plenty of engaging screenings, talks, workshops, exhibitions, and installations. People are chatting, laughing, and drinking beer and coffee in Kinodvor, the festival’s social hub. Kids and families are wandering through (not always at a safe distance).
Then ensure you check what Slovenia’s Covid rules are. Oh, and then you need to get an antigen test before you leave, and, as a Canadian, you must have a PCR test before you return to Canada. And it’s not just a matter of checking the country’s guidelines once. Things are so fluid that you have to check weekly to see if anything has changed.
Shit.
As usual, people are overthinking. Festivals will be in person again. Don’t let yourself be fooled by the gadgets and gimmicky nature of online events. They are not the same and never will be.

Beyond those lurking shadows, Animateka felt relatively normal. That’s a credit to the amazing staff who were very well prepared. Not only did they provide a detailed list of where to get COVID tests or what to do should you test positive, but within each festival bag was an N-95 mask, a take-home antigen test (which I put to good use after waking up the first day with cold symptoms), and a bottle of wine (for those missed social events).
If anything, Animateka was a reminder of how much we need in-person festivals. You could see how content people were to simply be with others. Yes, there were awards, but the real grand prize at this year’s edition was simply the act of being together.
Animateka was a moment to come up for air and breathe life in.
To be honest, I was having second thoughts about travelling right up to the moment I grabbed a cab to the Montreal airport. Even the airport felt different. It was pleasantly quiet and getting through security was smooth. Once that was done, it all felt relatively normal. The travel process was its usual blend of tedium and exhaustion.
It was at the end of the week in Italy that my anxiety returned. News of some sort of South African variant has emerged.
After wrapping up the second consecutive online Ottawa International Animation Festival (OIAF), I had had enough of computer screens and video chats. And with the virus seemingly calming, I thought, okay, it’s time, time to hit the festival circuit again.

No one spoke of it, but you could see it in the eyes and hear it in the voices. Even Igor Prassel, normally as straight-faced as they come, was moved to tears as he spoke during the festival’s awards ceremony. It was a powerful and moving moment that surely brought a tear to everyone in the room. At that moment, you realized that we weren’t necessarily there for the films or awards, we were there for each other.
Once the lights dimmed in the cinema, you momentarily escaped all the chaos, and lost yourself in assorted animated worlds.
The whole experience is different from the moment you book your ticket. Research is mandatory to determine each country’s Covid regulations. It’s not just finding out what Italy requires when arriving (via France, which has its own set of guidelines), but it’s also dependent on where you’re arriving from.
With that filling my mind, I drove off (courtesy of Animateka director, Igor Prassel, who attended the Piccolo Festival for a day) to Ljubljana (a country that only had a 54% vaccination rate as of November 2021).
The notion of hybrid events is short-sighted. Each festival (at least the worthwhile ones) has its own unique personality. Annecy, Zagreb, Ottawa, Animateka, etc., all have different characteristics, different goals, and unique experiences.

Igor told me about cancellations happening. Some guests and jury members canceled. They were worried about this new variant. On top of that, Animateka could only have a 50% capacity in venues (all attendees had to show their vaccine passport or provide a negative COVID test) and would not be allowed to have any evening social events, since current restrictions require all bars in Slovenia to close by 10 p.m.
Perhaps for some, the question still remains: Where do festivals go from here? Will there ever be fully in-person festivals again? Will they become hybrid events, as some have suggested?
Sure, some industry talks can be offered remotely, but if festivals veer too far into the hybrid route, there’s a risk that not only will festivals start looking the same, but they will start stepping on each other’s toes. No one should want that.
Each year I attend the Animateka Festival in Ljubljana, Slovenia. If the OIAF is my spouse, then Animateka is a bit like my festival mistress. I help out with programming, catalogue writing, and filmmaker interviews, but I don’t feel the same pressure that I do when working on the OIAF. Beyond that, I love the intimate, easy-going, and insightful vibe of Animateka.
We need to be with each other. We need to be laughing, crying, yelling together at the screen, arguing about the merits of the competition selection in the bar afterwards, telling stupid jokes between events, dancing with each other at festival parties. We need shared experiences with people from other countries, encountering other languages, visiting new cities and countries. We all need that.
So, after two years of not travelling, I just rolled the dice and decided it was time to live again. I booked my trip to include a stop in Italy, where I resumed a scriptwriting research project that was postponed in March 2020. I was also invited to give a talk on Canadian animator Jacques Drouin in Venice and then serve as a jurist for the Piccolo Festival dell’ Animazione taking place in a small Italian village, San Vito al Tagliameto (just a two-hour drive from Ljubljana).