Sidebar
Browse
The authors cautiously note that European tv animation is seeing year-on-year growth, which “is likely partly driven by web-only animation tv series, primarily on Youtube and other video-sharing platforms.” But they stress the limits of their research: for example, their dataset is assembled from various sources and probably missing titles, from some countries especially. They write, “We therefore believe that these figures give a correct order of magnitude of the production of tv animation in Europe but should be taken with care.”
The research, from the European Audiovisual Observatory (an arm of the Council of Europe), maps out the state of European animation. It focuses on the years 2015–19, following on from the organization’s previous report, which looked at 2010–14. The full report is available here.
According to a new report, the continent produces some 829 hours — or 5,166 episodes — of animated series and tv movies annually. And that number is increasing over time, though by how much isn’t clear: the data is constrained by methodological issues.
France is behind 35% of hours of tv, the U.K. 26%. So three in five hours are made — entirely or primarily — in one of the two. Germany and Spain come next, with 7% apiece. But the authors emphasize that this data is very likely incomplete, with countries like Russia probably under-represented.
Yesterday we covered the report’s data on theatrical releases. Below are our takeaways from the research on the production of tv content (including streaming), which refers to the period 2015–19.

To watch all the tv animation made in Europe in a year, you’d have to sit in front of a screen for more than a full month — no pausing, no sleep.

2) Seasons with few episodes are common.

They account for 55% of all episodes. Series with episodes of this length make up 53% of titles. The next-biggest category is 11–20 minutes: 26% of all series have these. And 18% of series consist of episodes of 21–30 minutes.

3) More than half of episodes are ten minutes or under.

4) France and the U.K. dominate production. 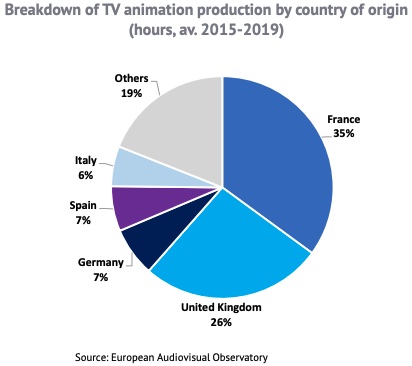 5) Co-productions are much more common in animation than live action.

In all, 36% of hours of animated tv belong to international co-productions. For live-action fiction tv, that figure is only 10% (telenovelas and soaps aren’t included). When counting by titles, not hours, 21% of animated productions are co-productions. 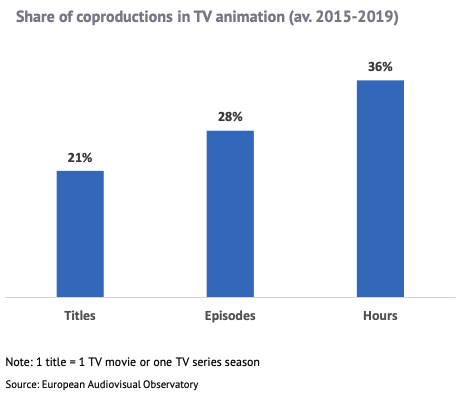 The graph below shows the production of series and tv movies rising by 20%–40% from 2015 to 2019, depending on whether one counts titles, episodes, or hours. The report estimates that 829 hours were produced annually, across 219 titles comprising 5,166 episodes.
The biggest category here is series with 2–13 episodes per season, which account for 40% of titles. Seasons with 14–26 episodes make up 25%, and 27–52 episodes 23%. Obviously, when counting by number of episodes or hours of runtime, series with longer seasons occupy bigger proportions.