You can read more about ILM’s work on Loki in VFXWorld’s piece, ILM is Up to its Void in Alligators with ‘Loki’ VFX.
Elsewhere in the video, we also get a look at how the team designed the monstrous cloud creature Alioth, who faces off with the aforementioned Loki variants during the episode’s climax. Kuruvilla says that the entity’s many states of being – resting, hunting, chasing, attacking, eating – required a wide range of accompanying FX.
Kuruvilla says that the images of these American gators were then solved to build a basic 3D volume. “We used texture to draw basic guidelines of the alligator’s scales from those images that were mapped to his body, and this was used as the guide for the sculpt,” he continues. Working with Jorge Gonzalez de Cossio, David Skorepa, and Alex Liu, Kuruvilla rose to the challenge by “match[ing] every scale, tooth, and nail to various bits of reference image in model, texture and lookdev.”
Back when Loki first aired, CG supervisor George Kuruvilla told Art of VFX that the process of finding the right alligator as a reference was rather rigorous.
“In order to find an American alligator of the right age and size, we had sent the director several image references,” he explains. “This process was also helpful to try and match the size to the on-set ‘stuffy’ alligator. The methodology used for this build was to collect as many reference images as possible of American alligators of a similar age and size.”
Max Weinstein is a writer and editor based in Los Angeles. He is the Editor-at-Large of ‘Dread Central’ and former Editorial Director of ‘MovieMaker.’ His work has been featured in ‘Cineaste,’ ‘Fangoria,’ ‘Playboy,’ ‘Vice,’ and ‘The Week.’
Still, while we may never quite grasp how this horned gator came to be, we now have an in-depth look at how it was created, with a new behind-the-scenes video from Industrial Light & Magic. In this VFX breakdown, we see how ILM creates skin texture and a medley of facial expressions for the show’s reptilian star.
“The most challenging aspects of Alioth were his facial sims and maintaining the balance of definition, performance and internal lightning all through our volumetric simulation,” Kuruvilla continues. To pull this off, the team turned to references pertaining to different aspects of the creature.
[embedded content]
Kate Herron directed this episode of Loki. ILM visual effects supervisor David Seager, animation supervisor David Crispino, executive visual effects producer Jeanie King, and visual effects producer Ali Greene also oversaw the work showcased in this video.
Since his appearance in Episode 5 of Loki, Alligator Loki has become a fan-favorite riff on the iconic Marvel character. In that episode, “Journey to Mystery,” multiple variants of the titular god of mischief are introduced, but while some – like Boastful Loki, Classic Loki, and Kid Loki – are more clearly defined, the origins of Alligator Loki are left unexplained and unquestioned.
“We received pyroclastic and volcanic images specific to his body scale and texture, images of lightning for his internal lightning and volumetric natural phenomena reference for the various aspects of his movement. In addition, we had our art department assist with several Alioth poses,” he adds.
Watch ILM’s VFX breakdown of Loki Episode 5: 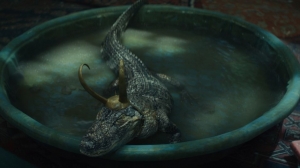