Two key sequences involved Phastos’ holographic printing press. “The suit is being printed; we’re literally using lines that are coming together and printing suits on the characters,” remarks Dumont.  “The other one has Phastos [Brian Tyree Henry] developing the hologram in what is called the astrolabe forger, which was later decided to become something that’s tangible.  Phastos has the power to create things out of nothing; he has these metallic rings that act like an MRI machine going around the body of the hologram and transform it into something that is real.” In order to give the holograms more of presence in the room, the decision was made to have the gold lines emit light.  “Stephane put a LED screen in the middle of the room and we added shadows to distinguish between the hologram and printed elements,” Dumont says. “We were using a lot of optical treatments on the hologram so not to make it perfect.  Also, instead of just being lines, those lines were a combination of energy, solid lines, plus dot elements that were driving through. You can’t quite tell if it’s solid or not.”
Postvis was provided by Stephane Ceretti, which assisted with the timing of effects.  “We had to change the timing of some cuts, like when the tablets are falling in the museum during the outbreak,” says Dumont, who made some slight adjustments to the workflow.  “We were trying to get some fast rendering to be able to judge illusions that were specific in terms of compositing things.”

Visual references were lacking; the lack of any previous Eternals films to work from complicated the VFX teams’ understanding of what visually appealed to the director.  “Chloé does not like atmospherics, which is something that DPs usually love to do to have better lighting,” states Luma Pictures VFX supervisor Olivier Dumont (Ford v Ferrari).  “We had to fight against this when creating holograms and illusions. Chloé is so grounded and she had to deal with things that were not grounded at all.  Stephane Ceretti did a great job to guide us in the right direction.”
Scans of the cast with and without their suits were captured. “The CG suits were tracked onto the actors, and then we had to paint out anything that was outside of the suit,” remarks Dumont. “Because they were wearing robes with shoulder elements that the suit doesn’t have, we had to fold that back in.  The other version had the actor already in the suit, so we had to track the, put on the sweater and clean out anything that was coming from the suit. We had to redo the neck in CG to make sure that the transition worked.  We lit the sweater based on the room lighting and the printing lights coming in; those were put onto the particle suit afterwards.”  Each suit had the same starting point and methodology.  “They have their symbols, which is the middle the suit, so we were always starting with the printing lines coming out from there.”

Luma ultimately delivered a wide range of visual effects on the show. “Eternals was so eclectic in terms of work that you could not have defined something and rolled with it for 1000 shots,” Dumont shares. “Each shot was different and required a one off thing.  The biggest challenge was maintaining a high-quality level on so many things that are one off. I’ve been working with Marvel Studios for a long time, both on the vendor and studio side.  I know how they work so I could anticipate what the changes would be, making sure we had the opportunity to make those changes.  But even with this, we had last minute changes that were compromising what we could do with the time that was left.  But in all, it feels like we had enough time within the two years on this movie to achieve what was wanted.”

An organic approach was taken for the illusions created by Sprite (Lia McHugh).  “The illusions come in with floating curves that then form something,” states Dumont.  “There are two kinds of illusions in the movie. Those that look real and others, like Babylon Story, which use simple lines that resemble shadow puppet theatre.  It is still made to feel grounded in the shot by generating and catching light.  When you go into the realm of something we haven’t seen before, with no real reference, everybody has a vision in their mind.  We did some concepts to get people engaged with the idea, but it is also a question of timing.”
For Thena’s story, there was a lot of back and forth on the vignettes. “What kind of angle we chose was a big thing because it can’t be too small that you don’t see anything, but it also can’t be too big otherwise the characters won’t be able to relate to it.”  Baby Gilgamesh is a photoreal illusion. According to Dumont, “We were making something cartoony by default but had to be photoreal.  We had to make sure that the lighting was perfect compared to plate.  The lighting was good for everything except for the atmospherics, which Chloé did not want.  We had to color correct all the plates that had too much smoke, so it didn’t overpower the plate.”
he audience soon learns that the Eternals are generated beings who use the same technology for their own ends. “We tried to find a language so that the audience wasn’t lost when we went from one character to the next, and understood what was happening when they used their powers,” Dumont explains. “The other thing that was interesting about Eternals was trying to carry this language throughout so that it feels like something that is old, has been used before, and has a logic.” 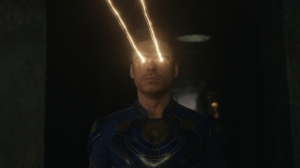