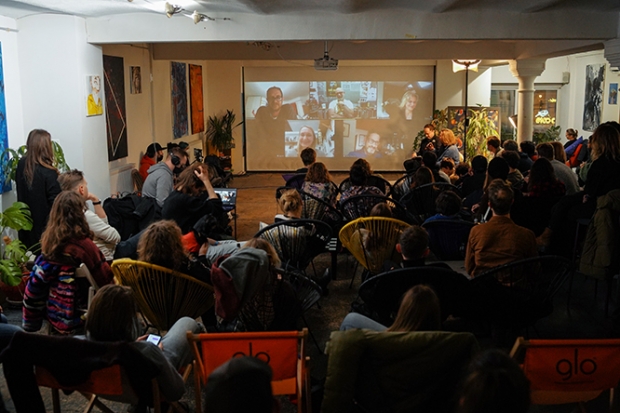 Several of the projects dealt with serious topics or social issues. In Three Comma Fourteen directors Joana Nogueira and Patricia Rodrigues, and producer Vanessa Ventura from Portugal want to raise public awareness of the special problems that children diagnosed with ADHD encounter in society. They propose no cures for ADHD but want to help people to understand what they can do to make life easier for these children.
Desire to Win – Michaela Rezova and Kamila Dohnalova, Czech Republic
3 Cups of Coffee – Natalia Krawczuk and Roza Misztela, Poland
For the final film night, Save Ralph directed by Tobias Fouracre was screened. The four-minute film was released by Humane Society International as part of its campaign to ban animal testing throughout the world. Ralph, a rabbit, talks about his life to an interviewer. He is used for animal testing for cosmetic products and he talks about the terrible effects it has had on his body. The film is powerful, moving, and impossible to watch without evoking strong emotions. After the films, it was time to kick back, relax with a beer and socialize.
This year fifteen animation short films vied for ten awards ranging from industry accreditation for Annecy 2022 Mifa to the top prize of 2000 Euros in cash that the production can spend in one of the Visegrad Group countries (Czech Republic, Hungary, Poland, and Slovakia).
Puppet fabricator, model maker, and painter Susanne Jergger and cameraman Adam Jones shared practical approaches to modeling and lighting for a stop motion production. Susanne created the miniature sets for Wes Anderson’s French Dispatch. Adam worked on Coraline and Kubo and the Two Strings. Both Susanne and Adam are involved with Guillermo Del Toro’s upcoming Pinocchio. 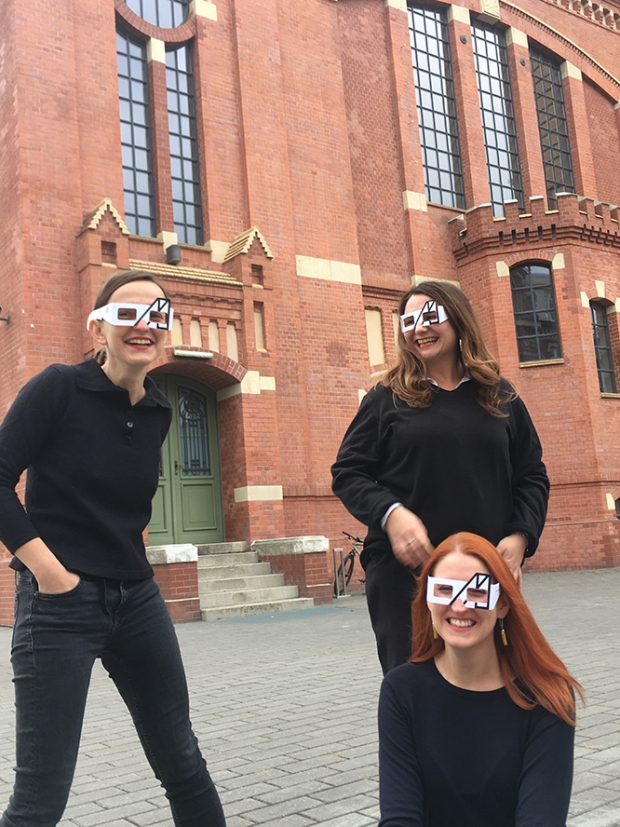 9 Million Colors – Bara Stejskalova, Jakub Kostal, and Petr Koubek, Czech Republic
After a day of hard work, it was time to socialize at the Pop’n’Art Café. Each evening began with a film. One night it was a selection of Greek stop motion films from the Thessaloniki Animation Festival introduced by animator Anastasia Papadopoulou. On another evening a program of Czech stop motion animation was curated by Pavel Horacek, Anifilm Animation Festival Program Director.
3 Cups of Coffee – Natalia Krawczuk and Roza Misztela, Poland
Voucher Worth 60 000 PLN (approximately 13 500 Euros) for using the studio and film production facilities Funded by the Audiovisual Technology Center (CeTA) in Warsaw
Even though I don’t get to participate in the Master Classes and workshops as much as I would like to because I am kept very busy at ANIMARKT, they are a major part of the forum. With over fifteen years of experience in the field of animation, Marcos Valin is well qualified to teach character animation. He has worked on Isle of Dogs, Kubo and the Two Strings, and Frankenweenie to name just of few of his numerous credits. His three-day character animation workshop helped the participants develop skills in timing, staging, arcs, anticipation, balance, and eye darts. The participants were given hands-on exercises to put the principles that they learned into practice during the preparation of an animated sequence.
Unfortunately, I missed the Master Class given by Academy Award nominee Jim Capobianco and stop motion veteran Kat Alioshin. They discussed how to create an excellent team. With years of experience between them, I am sure that their audience gains a lot of information about being a member of a stop motion animation team that works well together.
Humanity – Tereza Kovandova and Kristina Skodova, Czech Republic
Hello Summer – Martin Smatana and Veronika Zacharova, Slovakia
CEE Animation Forum Award:
Butterfly – Suncana Brkulj and Drasko Ivezic, Serbia
The training sessions were rounded out with a script consultation with story editor and screenwriter Anna Bielak. Vanja Andrijevic, an expert on production, distribution, and promotion, was the production consultant. After five consultations the pitching participants received knowledge that will be useful throughout their career in animation.
Petra and the Sun – Malu Furche, Stefania Malacchini, and Yeniffer Fasciani, Chili
I did have the opportunity to hear Krzysztof Czyzewski’s Master Class on Legal Aspects of Film Development. As an expert on media law and litigation Mister Czyzewski was well qualified to speak about legal issues concerning copyright law, a topic everyone involved with animation needs to know about.
ANIMARKT, the only industry event in the world dedicated to stop motion, is organized by MOMAKIN. Combining the world of animation filmmaking with international production, distribution, and promotion, MOMAKIN supports animation projects through every phase of their development. It was founded and run by three intelligent, hardworking, energetic, and amazing women: Agnieszka Kowalewska-Skowron, Katarzyna Gromadzka, and Paulina Zacharek. 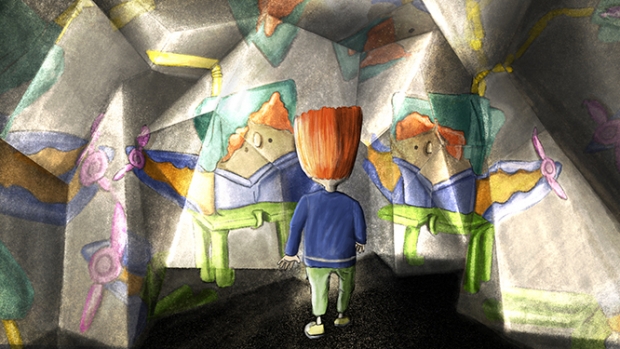 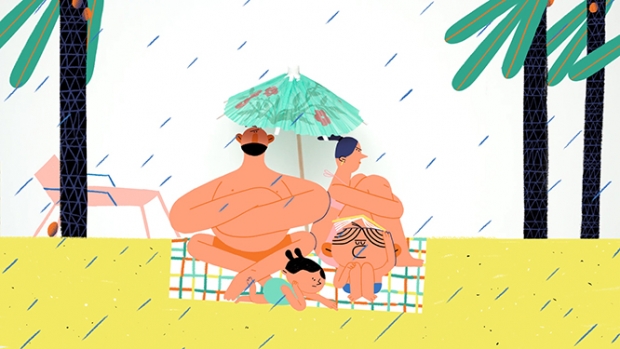 RIA Animation Residency Award by APA and APA Lab:
Martin is no stranger to the ANIMARKT Pitching Forum. In 2017 he took home the top pitching award for The Kite. The film deals with the death of a beloved grandparent in a tender way that young children can understand and not be disturbed by. It is based on a story that Martin’s grandfather told him. The Kite was his graduation film, premiering at the Berlinale, was a finalist for the Student Academy Awards, and is included in the collection of the Museum of Modern Art. It also won numerous festival awards. Martin is an extremely talented filmmaker and I predict that we will see many more excellent films from him in the years to come.
Show Me Your Project introduced feature films and series that are in various stages of production but are still looking for some part of their team and/or financial support. Thirteen projects were presented.  Meet Your Partner brought together postproduction studios in Chili with producers in Central and Eastern Europe. The event was organized by ANIMARKT in cooperation with Animachi, the Association of Professional Chilian Animators, and Pro Chili which promotes the export of Chilian goods and services. 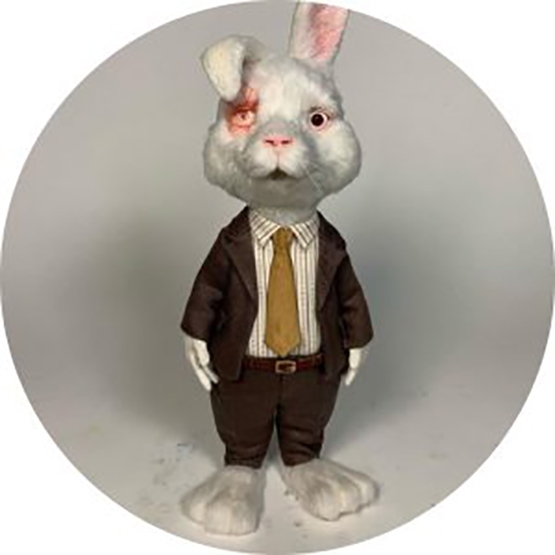 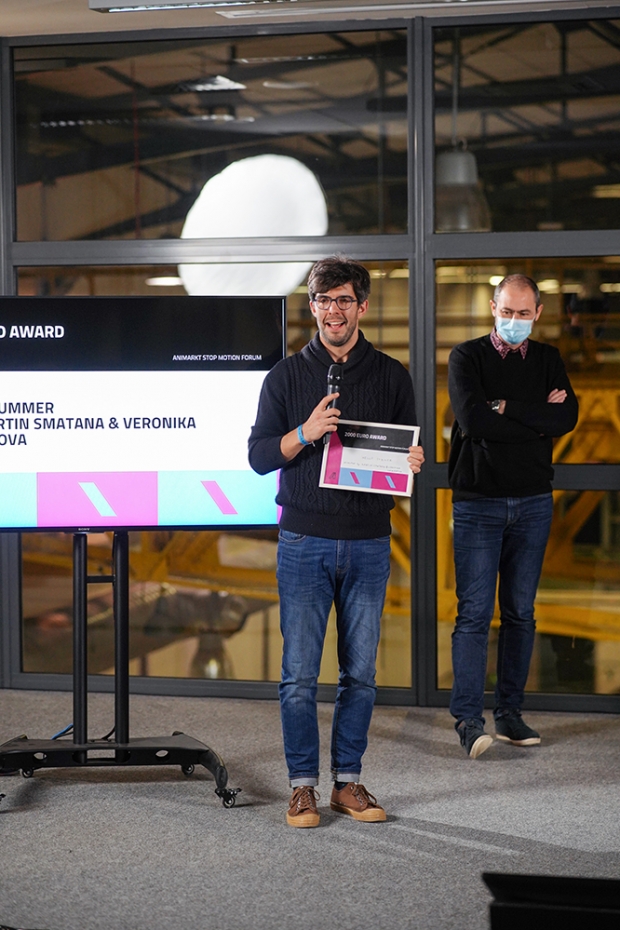 Sound Award:
Many animators have trouble constructing a concise pitch so it is my job to help them mold their pitch into a coherent presentation that contains all of the necessary information that the jury wants to hear. Often my biggest task is to get them over their fear of speaking in front of an audience and offer support and encouragement. Each project receives one hour alone with me but for people who need extra help, I am available for additional sessions.
Becarias (Interns
Galaxia was awarded the RIA Animation Residency given by APA and APA Lab in Argentina. The RIA (International Artist Residency) for creative writing and visual development of animated projects is designed to offer residents a space and time away from everyday pressures to work on their projects and participate in workshops.
9 Million Colors – Bara Stejskalova, Jakub Kostal, and Petr Koubek, Czech Republic
Not a minute was wasted at ANIMARKT. The mornings began with Animation Breakfasts. The series of morning talks included a discussion about what is new in Polish stop motion animation. Katarzyna Gromadzka of MOIMAKIN and ANIMARKT announced an exciting development in stop motion animation. She presented a new system of armatures which was developed at MOIMAKIN which involves connectors with no soldering. This makes work much easier for animators. The armatures still use traditional sizes (small – 20 cm, medium – 25 cm, and large – 30 cm). They can also be custom designed. You can find out more about this new breakthrough for stop motion animators by emailing animarkt@momakin.pl
Distribution Award by Radiator IP Sales:
The big winners of the  ANIMARKT Pitching Forum were Martin Smatana and Veronika Zacharova. Their project, Hello Summer, took home the top prize of 2000 Euros in cash as well as the Animond Award. The film is a comedy aimed at children but I think it will be enjoyed by the entire family. The story revolves around a Central European family that expects to have the best summer holiday ever when they set off in the family car to go to the seashore for the very first time. Instead, they end up going through a roller coaster of disasters from a flat tire, a hotel that did not live up to their publicity, and the four of them not being able to agree on what they want to do. In the end, they finally realize that the joy of their holiday is really about spending time together. The film will utilize a combination of stop motion, animated objects, and digital 2D animation. The drawings that Martin showed for the eight-minute film have a retro French Riviera feeling. He said that the film is based on his childhood memories of his family holidays.
For anyone involved in the world of puppet animation ANIMARKT Stop Motion Animation Forum is a major event. The five-day forum is comprised of three main sections, Masters, Business, and Pitching. For the past five years, I have been the pitching coach at ANIMARKT, a very rewarding project.
Producer Carlos Zerpa represented the Venezuelan project Galaxia for director Robinson Moreno. The script centers around Kevin, an indifferent teenager, who thinks that he knows all about sex until he meets Galaxia, a street sex worker. She shows him her universe. From then on, reality twists into a journey of bodies, feelings, and darkness, during which Kevin discovers the fatal price of fulfilling one’s fantasies. Definitely an adult film.
Hello Summer – Martain Smatana and Veronika Zacharova, Slovakia
Galaxia – Robinson Moreno and Carlos Zerpa, Venezuela
Dragonframe Software: 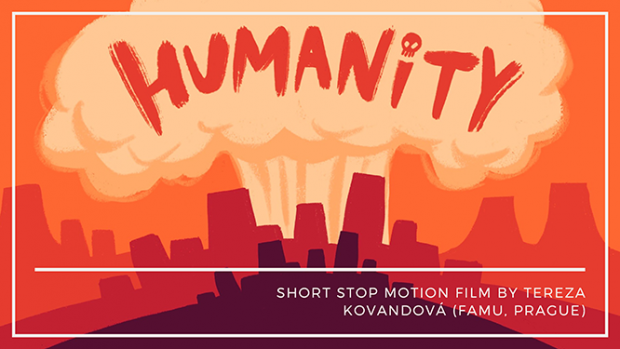 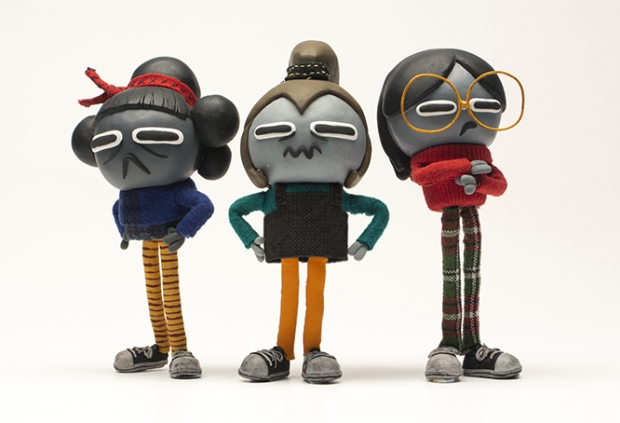 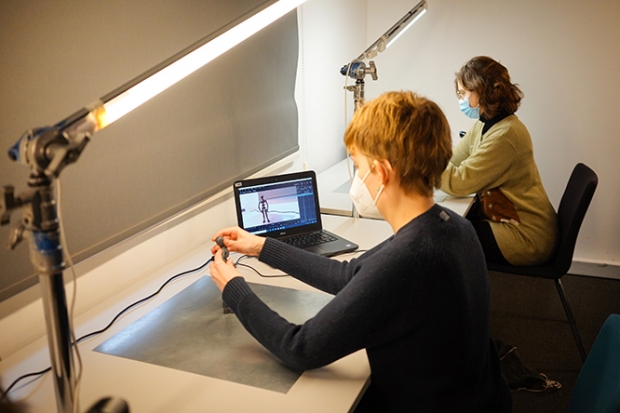 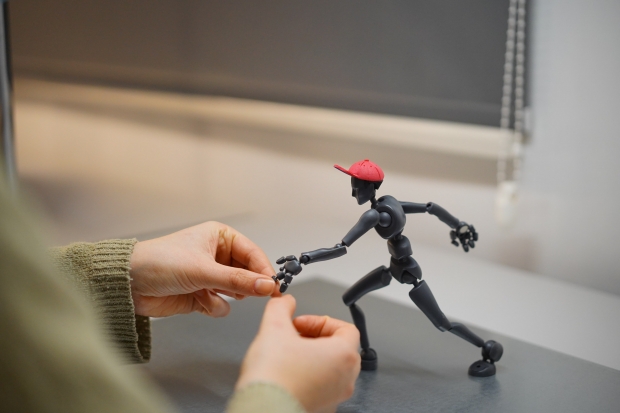 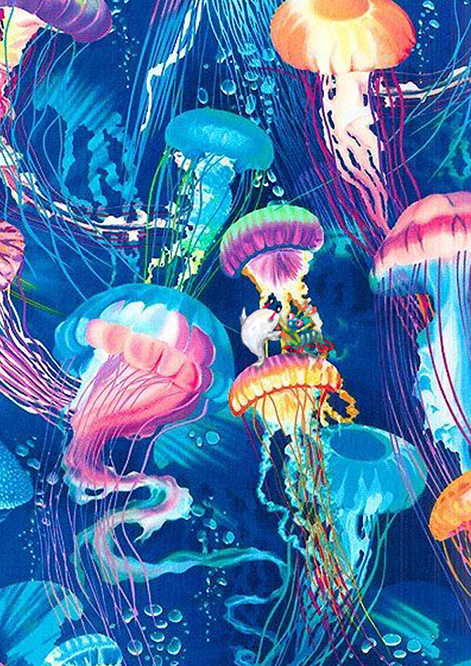 Two Special Non-Competition Award Given by the Jury: 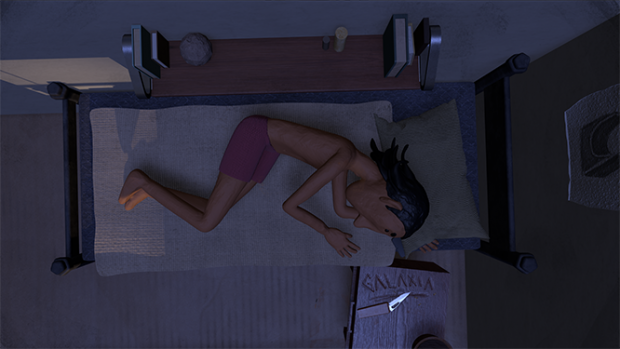 Lodz is a fitting home for ANIMARKT and MOMAKIN. Known as the Hollywood of Poland, the city is home to the renowned National Film School that boasts such famous alumni as Zbigniew Rybczynski and Roman Polanski. The city is the home of the Museum of Cinematography and Animation, and it was also the location of the now-defunct Se-Ma-For animation studio which is credited with two Oscar-winning films, Zbigniew Rybczynski’s Tango (1981) and Suzie Templeton’s Peter and the Wolf (2006) as well as numerous short films that have become classics.
Other breakfast chats detailed the workings of Creative Europe for 2021 to 2027. The organization is the European Union’s financial support program for the creative, cultural, and audiovisual sectors in Europe. Agata Gruszecka from Creative Europe’s Polish desk outlines the procedures and possibilities of financing film projects through Creative Europe.
This year ANIMARKT was a hybrid edition but hopefully, we will all be able to be together again. The exact date has not been set for the 2022 edition but you can read more about this year’s edition and find out how to participate in the next edition at: www.animarkt.pl
The business arm of the festival is designed for industry networking and meetings. A new feature this year is the Talent Fair. It matched young filmmakers with one of three studios that were looking for new young talent. A representative from Strange Beast, Passion Animation, or Beast Animation reviewed participants’ portfolios and introduced them to the company’s hiring policies. It was an excellent opportunity for people entering the job market to begin to make professional contacts. 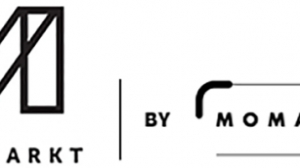