Budapest-based Puppetworks Animation Studio teamed up with Psyop to create an 8-minute CG cinematic for the latest chapter in the hugely popular Apex Legends franchise, Stories from the Outlands: Gridiron. Apex Legends is a free-to-play hero shooter game where legendary characters battle for glory, fame, and fortune on the fringes of the Frontier.
[embedded content]
Developed by Respawn Entertainment and published by EA Games, every episode of Stories from the Outlands provides Apex Legends fans, players and non-players, a chance to delve into the unknown lore of the characters of Apex Legends.
Debbie Diamond Sarto is assistant news editor at Animation World Network.
Check it out:
Led by Psyop creatives, and directed by Trevor Conrad, Jack Anderson, and Alexei Bochenek, the Puppetworks team produced the 8-minute short from 3D previs to final composite. The release garnered over 2 million views during its first week on YouTube.
Source: Puppetworks Animation Studio

The cinematic tells the story of Bangalore, the consummate professional soldier from a family of soldiers. We see Bangalore, who is torn between her brother and the only cause she’s ever known, loyalty to the IMC. Bangalore has difficult decisions to make – and hard consequences to face – after the Battle of Gridiron. 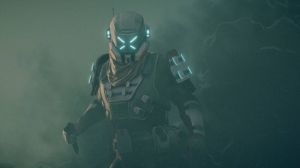