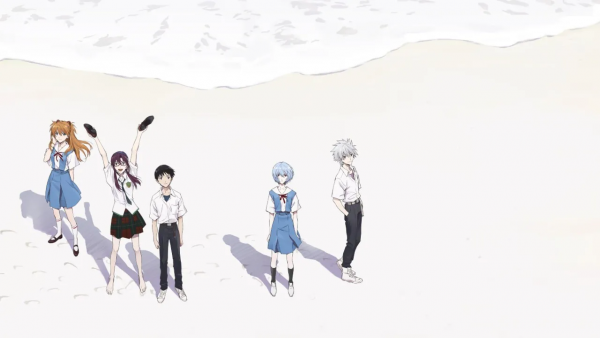 The final film in the rebuild tetralogy was released via Amazon Prime last week so it was with eager anticipation that I sat down to watch it. Only to be interrupted 57 seconds in by a phone call that lasted a long time (Irish people like to talk!) Trying again the following night met with more success. Initial thoughts were entirely skeptical but were gradually replaced by appreciation as the film wore on. The ending is about as good as is to be expected given the series’ long, complicated history and it will be interesting to watch it a second time.

With regards to Luca, it is very important to keep in mind that Disney is an enormous corporation who exist solely to make money and anything, anything they put or allow in their films is with the anticipation that it will pay dividends. The sudden mushrooming of LGBTQ+ characters in animation is not merely due to greater social acceptance. That is merely the catalyst allowing such characters to become profitable. If a film or show is being marketed with an emphasis on the inclusion of a queer character, you can be certain it’s as part of the plan to attract viewers and not based on the merits of the character themselves.
This article is a bit old but I wanted to comment on it because there seems to be a trend of viewers and fans demanding clear and defined aspects in shows and films when there is even the hint of ambiguity. This is especially so when one feels affronted in their beliefs. Art relies on interpretation and it is actually a valuable thing when two different people can read the same piece of art in different ways. It also helps when both people know they interpret things differently; it adds to the understanding of others.

I mention this because Postman Pat as a character has undergone a more radical change throughout his career than Elvis and similarly, is almost unrecognisable from his original appearances. Yet his original incarnation has just as much appeal to young viewers today (in my opinion) and it seems silly to ‘update’ him.
A few thoughts on the final Evangelion film, the new Jellystone! series on HBO, Pixar’s Luca, and the Fionna and Cake spinoff of Adventure Time
There is a lot more to the topic and it is intertwined with much bigger themes and issues with representation and inclusion in animation. Hopefully I can get around to discussing them. In the meantime, enjoy the ambiguity of Luca.

Luca, Disney and queerbaiting in animation

One thing I will say is that the relatively speedy release via Amazon is welcome for two reasons: they went above and beyond to meet fans’ needs in terms of rapid release but also local language dubs/subs and; the general nature of Amazon means casual fans such as yours truly don’t need to fork out to pay for yet another OTT service aimed at a niche audience.
Jellystone! falls into a similar predicament and I can’t help but wonder if the show will be merely another blip on the radar; destined to disappear into the ether as quickly as it appeared.
Hot of the presses just the other day, HBO Max will broadcast a ten episode Adventure Time series based on Fionna and Cat. By the sounds of things, this is another salvo in an attempt to turn Adventure Time into a franchise universe. There is, of course, plenty of room for one, but do we really need it?

Adventure Time is a great TV show and it’s setting served it well. Is it destined to become yet another franchise that exists to envelop fans with its cozy familiarity? One of the great things about Adventure Time is that it burst onto the scene and was unlike shows that came before it. Turning it into a universe franchise would be a disservice to fans insofar that they will be disincentivized to seek out new things.
There is not much I can add to Yowp’s excellent post and their opinion is correct. Characters don’t necessarily need to be updated for contemporary audiences. I noticed this by way of my nephew who is all about shows such as Paw Patrol and Dragons Rescue Raiders. Both shows combine a fair amount of action with a lot of exposition and explanation. Yet when sat down in front of original Postman Pat episodes, he was entranced! For those unfamiliar, the original series’ of Postman Pat are straightforward stories but without much in the way of exposition; viewers receive few hints at what is happening and they must figure it out for themselves.