Max Weinstein is a writer and editor based in Los Angeles. He is the Editor-at-Large of ‘Dread Central’ and former Editorial Director of ‘MovieMaker.’ His work has been featured in ‘Cineaste,’ ‘Fangoria,’ ‘Playboy,’ ‘Vice,’ and ‘The Week.’
Godzilla vs. Kong 2 will go before cameras in Australia in the coming months. The film will mark another entry in Legendary Pictures’ Monsterverse franchise, which began with Gareth Edwards’ Godzilla in 2014 and has since spawned such sequels and spinoffs as Kong: Skull Island, Godzilla: King of the Monsters, and Godzilla vs. Kong.
Godzilla vs. Kong 2 has landed its first big lead, as the upcoming film’s cast and crew prepare to head into production this summer.
According to Deadline, Dan Stevens is attached to star in director Adam Wingard’s sequel to Godzilla vs. Kong. Stevens first worked with Wingard on the filmmaker’s blood-soaked 2014 thriller, The Guest, in which he stars as a U.S. war veteran who orchestrates a string of grisly murders. The director-actor duo earned high critical praise for the film, and now seek to rekindle their collaborative dynamic on a monster-sized budget.
During casting for Godzilla vs. Kong, Stevens was considered for the role of Dr. Nathan Lind, which ultimately went to Alexander Skarsgård. Neither Stevens’ role nor the details of the sequel’s plot have been disclosed at this time.

Back in January, Apple TV+ announced its order of an original live-action Godzilla series set within Legendary’s Monsterverse. An early synopsis for that in-the-works project reads: “Following the thunderous battle between Godzilla and the Titans that leveled San Francisco and the shocking new reality that monsters are real, the series explores one family’s journey to uncover its buried secrets and a legacy linking them to the secret organization known as Monarch.” 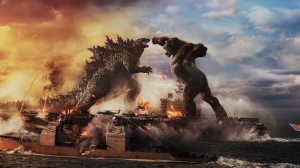