Source: Pixomondo
Debbie Diamond Sarto is assistant news editor at Animation World Network.
Guinness World Records says it, so it must be true: Pixomondo and William F. White International’s virtual production stage in Vancouver has been confirmed as the largest LED stage by the ultimate authority on record-breaking achievements.
“When it comes to world records in the realm of visual and special effects, we’re faced with a dazzling array of new technological wonders to consider,” commented Craig Glenday, Editor-in-Chief, Guinness World Records. “As fans of this latest generation of effects-led movies and TV shows, it’s exciting to be able to recognize a space as magical as the Pixomondo and William F. White International stage. It’s almost literally a dream factory where anything can be conjured up, from flying dragons to dramatic moonscapes. We’re indebted to our consultant, Ian Failes of befores and afters, for guiding us through the exciting, dynamic, and ever-changing landscape of VFX superlatives, and would like to congratulate Pixomondo and William F. White on their record-breaking success.”
Featured in the upcoming “Guinness World Records 2023,” PXO x WFW’s 22,000 square foot stage is 80 ft x 27 ft 6 in, lined with 2,500 LED wall panels and 760 LED ceiling panels. The stage is currently in production on the upcoming live-action Netflix series Avatar: The Last Airbender. 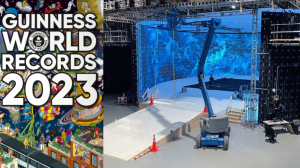