“This was a really advanced project,” added Mamais, who has overseen hundreds of student projects since he began teaching at SCAD in 2009. Before that, Mamais worked as lead designer at Midway Games and Crytek.
During the “making of” panel at SCAD GamingFest 2022, project lead and narrative designer Nathan Cartwright (B.F.A., interactive design and game development, 2021) and lead programmer James Hill (B.F.A., interactive design and game development, 2021) discussed how they developed the game as a 20-week senior capstone project. Cartwright and Hill were joined by SCAD interactive design and game development professor Jack Mamais and department chair SuAnne Fu.
A stranger in a strange land, the player must collect resources and explore as they build a new home and new life for themselves. The further they go, the more they come to realize that these “Hinterlands” are not quite as empty as they first appeared, and the fate of these lands now rests in their hands.

For Cartwright, one distinguishing aspect of development was the attention they paid to the protagonist’s options.
Hill emphasized that one positive from the pandemic was that it necessitated developing the online collaborative experience.
“Having a well-written narrative was one of our highest priorities throughout development,” said Cartwright. “Blending story, gameplay, and art style was critical to achieving the look and feel we wanted for the game.”
“Home Is Where The Hearth Is” will be available for download on Steam this summer. 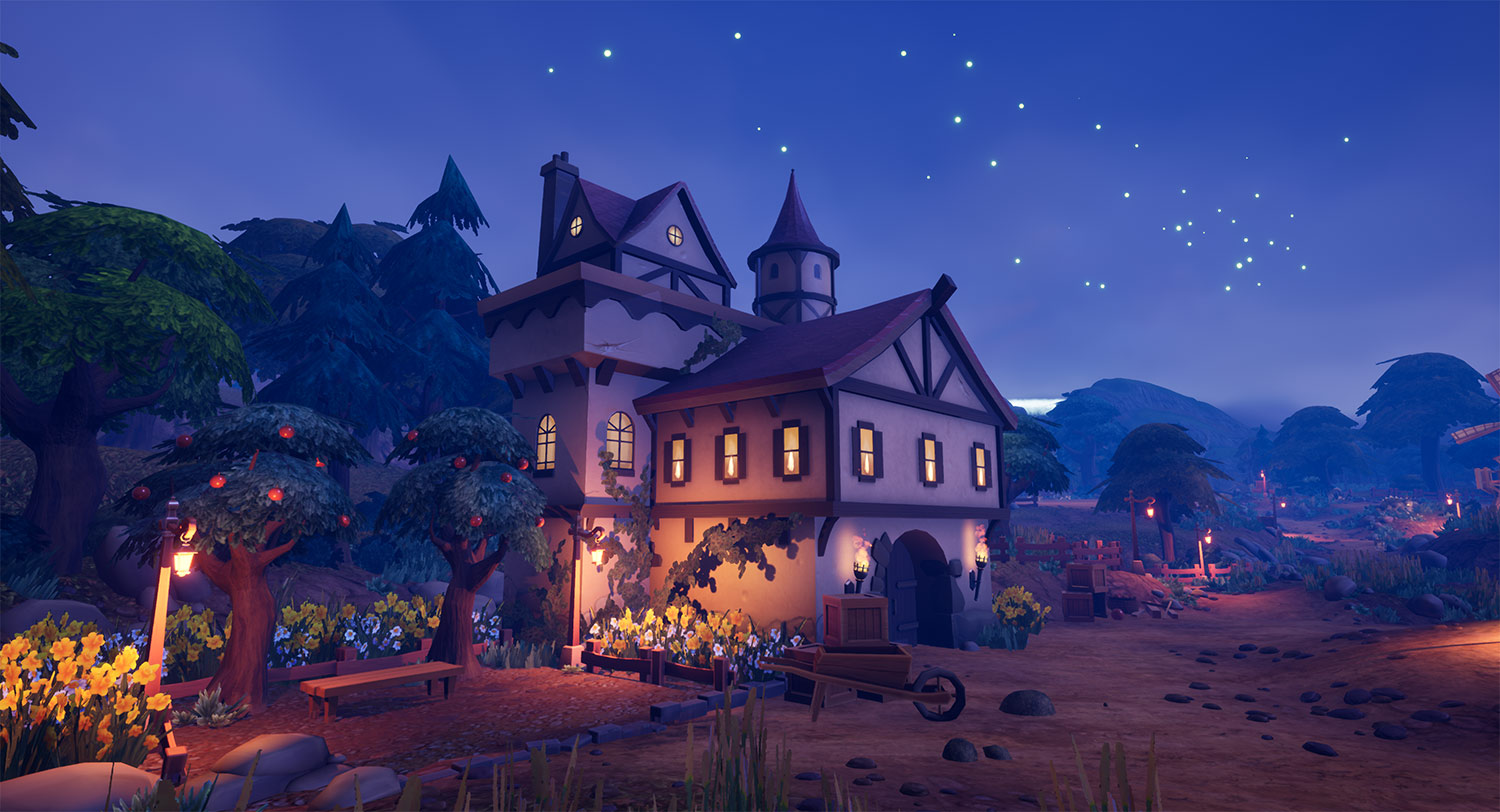 “Zoom and Discord helped us communicate, and Perforce helped us with version control,” he explained. “Even using Google Docs, which we might not have done if we were together in a classroom, proved beneficial. We were able to answer each other’s questions in real time and have a steady reference, rather than repeating conversations. It eliminated significant confusion.”
“My favorite part was being able to put out a finished product,” Hill said. “We worked hard to put together something that could actually be played, and we were all so excited to do it.”
“What I really loved about [creating] Home Is Where The Hearth Is — and this speaks to SCAD’s approach to curriculum — is how much effort went into Hearthbound Games, and replicating a real industry environment for our work,” Cartwright added. “That means that before we ever set foot outside SCAD, we will have had a real experience of what it’s like to go down this career path.”
“Amanda and Nathan had worked together previously on Zoelie [Intel Game Showcase 2021 Best Gameplay winner],” said Mamais. “Whereas that game had a big team of about 40 students, this team was much smaller, but significantly more experienced.”

To create Home Is Where The Hearth Is, Cartwright and Hill formed Hearthbound Games with fellow SCAD students and seniors Scarlet Blackwell, Amanda Wood, Dylan Porter, and Mei Li Ho.
“Games are the one form of entertainment where choice creates change,” he explained. “When you’re playing this game, your choices affect not only the narrative, but mechanical aspects as well. That’s the true power of the game.”
Much of the game’s art was created using Unreal Engine, Maya, Substance, and ZBrush. Cartwright explained that the game’s naturalistic color palette accentuated its hand-painted environments. This look complemented the core mission of the game’s protagonist, a young woman named Aden who travels into the wilderness in search of a fresh start.
This dramatic gameplay prompt is the essence of Home Is Where The Hearth Is, an action-based RPG created by students at Savannah College of Art and Design (SCAD). The game won Best of Show and Best 3D Game at the 2021 Entelechy awards, in addition to receiving multiple nominations from The Rookies in 2021.

“It’s a magnificent game made by students who are truly indie developers,” concluded Mamais. “It’s exciting for it to be on SCAD Games Studio on Steam, so that everyone can play it.”
“As the project grew, our skills grew too, and the quality of the game started to shift,” Hill said. “Because we were using an agile workflow, we were able to look at what was working and what wasn’t, which allowed us to iterate and address challenges before they became unmanageable.”
Department chair SuAnne Fu agreed, adding, “The branching narrative of Home Is Where The Hearth Is means you can really explore the world and get into it because it’s so rich in content.”
Said Cartwright, “These features, in combination with our resource collection and management mechanics, reinforced the foundational question posed by our narrative: What makes the place you live a home, and what is that worth to you?”
“The students wanted not only to make a game that looked good, but a game that played great, with at least 10 hours of gameplay,” he continued. “Early on, it was clear that what they were doing wasn’t going to be a Diablo clone. It has its own unique voice, with the character of the hearth mechanic, and is distinct as an action-based RPG.”
As the game progresses, Aden battles animated skeletons, learns from a mysterious native named Ithran, and searches the forest for spirit animals that may provide guidance. Throughout, Aden must return to the Hearth in order to perform essential crafting tasks like binding stone into iron.