The imperfect puppets seem closer to Will Vinton’s Claymation productions than the more sophisticated builds of places like Mackinnon and Saunders or Laika. Likewise, the sets bear the imprint of having been created by the not always precise human hand. With a color palette of mostly ochres and browns and convincingly irregular textures in the terrain, the production design reflects how long this land has been deprived of water.
Shocked, she drives to her hometown to clear out and sell her grandfather’s house. The instant Rosa arrives in the outskirts of the small community the generic cg imagery transforms into the tactile and wondrous realm of stop motion. While obvious, this visible illustration of the transition from her capitalistic reality to a rustic and handmade one demonstrates the director’s smart vision to apply both options for dramatic purpose.
In 2011 Yara and her grandmother Lelena (Vitória Adelino Dias Soares) receive an unexpected visit from an enigmatic burglar. The more Nayola’s past unravels, the shorter the distance between the two parallel timelines becomes. Solemn in tone but vividly fey in its treatment of a serious subject, the film even folds in small touches of archival footage to an affecting song that provides further visual information on the events that transpired.

The Annecy International Animation Film Festival took place last week, wrapping with a triumphant closing ceremony on Saturday evening.
Stories where the past echoes strongly in the present drive a pair of Portuguese productions that premiered in Annecy’s official selection (one in the main competition and another in the festival’s quirkier Contrechamp line-up): Nayola and My Grandfather’s Demons. Their inclusion suggests a promising near future for the Iberian nation’s animation output. (On June 18th, Nayola won the animated feature award at the Guadalajara Int’l Film Festival, where it also screened last week.)
Sequences that take place in Nayola’s memory, particularly those related to her missing loved one, are presented in expressionistic fashion that calls to mind French title The Girl Without Hands.  But even when she isn’t remembering precisely, the backgrounds in her timeline brim with saturated hues and surrealist production design. In turn, Ribeiro and Almeida tackle violence with unflinching fortitude, especially in a scene that shows starving people fighting each other for provisions delivered by the U.N.
This year’s festival, the first entirely in-person edition since 2019, boasted a competition lineup that surely ranks among the strongest the festival has ever offered. 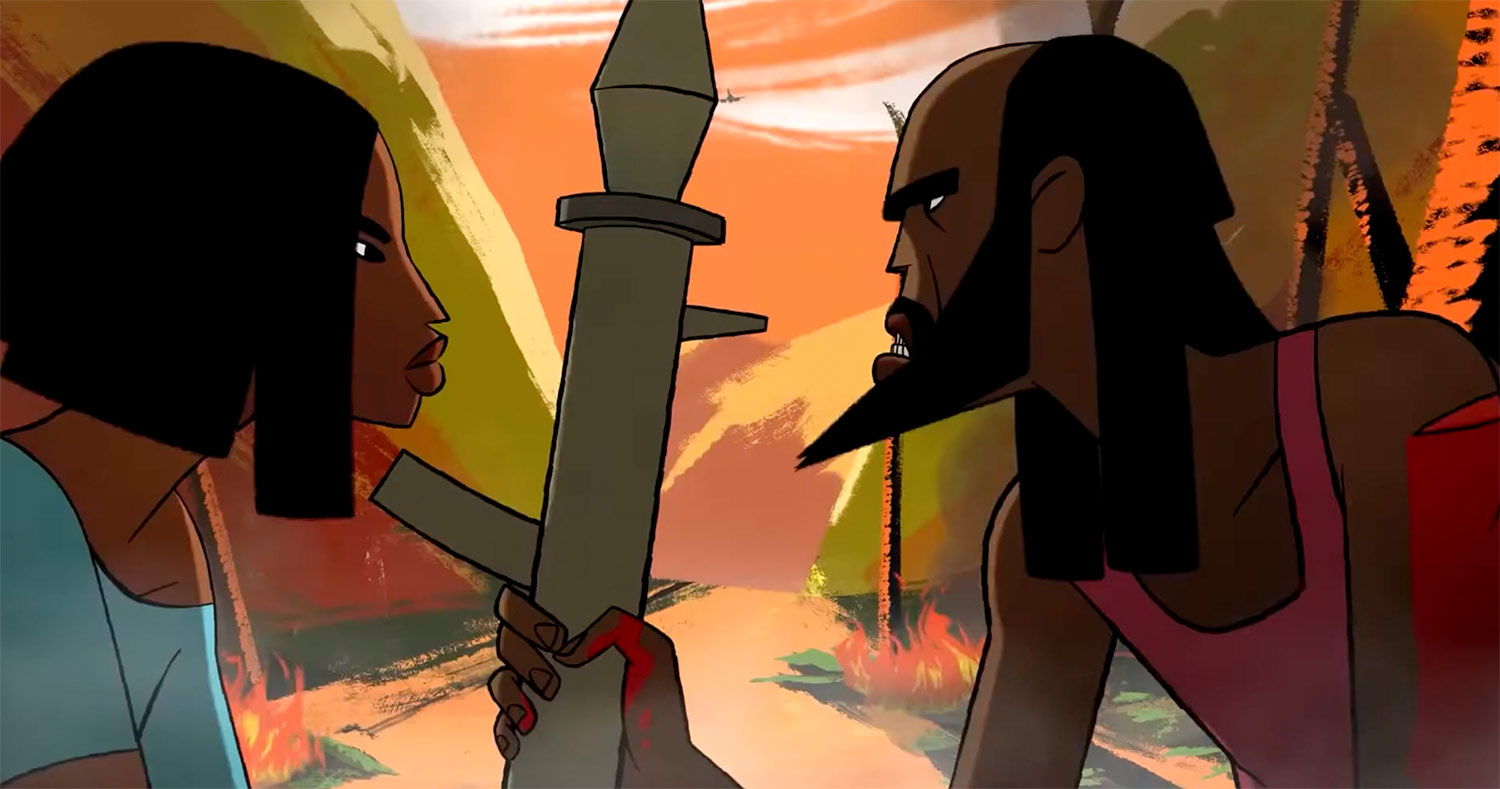 Ribeiro’s use of stylized hand-drawn aesthetic makes for gorgeously dreamlike interpretations of the inner turmoil facing the titular heroine. There’s a clear distinction between the depiction of Nayola’s experiences and Yara’s tribulations in a relatively peaceful era.
Over the course of Nayola’s odyssey across devastation, a mysterious jackal accompanies her. Present in African folklore as an adaptable and clever figure, the jackal here not only follows her steps but ultimately becomes a representation of her tireless efforts to stay alive in order to achieve her goal. Yet, the film’s focus points to Nayola’s inability to cleanse herself from the horrors she’s witnessed. Consumed by grief, she has lost herself.
Beato’s indictment of Marcelino’s acts rings harsher than one would expect in a relatively family friendly feature, but that’s exactly what gives meaningful gravitas to the story. Fueled by illogical envy and hatred, the old man not only shut out everyone but actively pursued their suffering. And even if, in the end, the resolution hinges on a few convenient revelations and other unsolved family mysteries, there’s an earned catharsis.

Slightly less poignant, but still invigorating in its deployment of the medium’s techniques, Nuno Beato’s My Grandfather’s Demons opens in a demanding office environment where employees must constantly improve their performance. At the top of the productivity chain is Rosa (Victoria Guerra), a young woman climbing the corporate ladder.
Once settled, Rosa begins to learn that her grandfather despised everyone around him, especially Antonio (Celso Bugallo), once his best friend. While Marcelino’s narration informs us of the details, Rosa learns of his secrets in strange nightmares inhabited by demon-like creatures made of clay that her grandfather had made to represent himself and others. The recurrent presence of these entities, either on the bookshelf or life-size in her glistening visions, imbues the picture with measured otherworldliness. Not too scary but effective in transmitting the beyond-the-grave burden that afflicts Marcelino.
Ribeiro’s striking work of historical fiction navigates similar thematic territory and evocative handcraft as recent releases Funan and Another Day of Life, both of which were released domestically by GKIDS. It’s not farfetched to think Nayola could land a North American home at GKIDS as well.
Although tempted to leave it all behind, Rosa decides to stay and amend his mistakes by figuring out how to bring water back to the local river. In turn, of course, she learns to disconnect from the spiritually unfulfilling things that overwhelmed her before.

As civil war rages in the mid-1990s, Nayola (Elisângela Rita), a young mother, desperately searches for her husband. Voiceover narration begins to let us into her distraught emotional state. Soon, however, the story travels 16 years into the future where Nayola’s teenage daughter Yara (Feliciana Délcia Guia) defies the authoritarian government with politically minded rap songs that she distributes on CDs across Luanda.
The digital animation early in the first act intentionally omits much detail for a streamlined and cold look to match the efficiency-obsessed mood of the big city.  Her monotonous, work-driven lifestyle has begun to take a toll on her and awakens a yearning to reconnect with her aging grandfather Marcelino (António Durães). A montage of her younger years with his voiceover concludes with Rosa finding out the man has died.
Historical drama Nayola splits its time between 1995 and 2011 in the southwestern African country of Angola, a former Portuguese colony, to dissect the generational scars derived from the not-so-distant armed conflict. From a screenplay penned by Virgílio Almeida, adapted from José Eduardo Agualusa and Mia Couto’s stage play The Black Box, director José Miguel Ribeiro constructs a rich and potent fable about letting go.