As the siblings share their conflicting emotions about future professional prospects, the boundless possibilities of animation bridge the distance between them. Examples include transforming text messages into paper planes, using the zipper of a suitcase to symbolize a road, or having a miniature version of Elizabeth come through a cell phone screen to reunite with Evelyn. Occasionally, a split screen even allows them to share a moment at the beach from their respective locations.

Home is Somewhere Else (Mexico/U.S.)

The film’s first chapter unspools in a world designed to resemble the simple and scratchy pencil drawings of a young child. In it, Jasmine, a U.S.-born grade school student turned activist, fights for her undocumented father and a mother temporarily protected from deportation under DACA (Deferred Action for Childhood Arrivals, an Obama-era program for those who migrated to the U.S. as children).
Tonally mischievous, Quantum Cowboys feels stilted in its humor and, for the most part, the performances come across as uninterestingly hackneyed; Gladstone is the exception and has the proper nonchalant air of an unbothered native from the inhospitable land. There are long live-action stretches without any embellishments that exhibit the film’s limited production value, which doesn’t automatically improve when the animation is reintroduced.

Fascinating in its ambition, if not entirely captivating in execution, this sci-fi western by writer-director Geoff Marslett mainly follows Frank (Kiowa Gordon) and Bruno (John Way), two best friends in late 19th century Arizona as they search for a musician who may or may not be dead. After Frank spends time in prison, the two reunite and meet Linde (the always memorable Lily Gladstone), who needs their help to recover her land.
The brightly-colored and deliberately unpolished style of the animation acts as a comforting vehicle to convey the fear and pain someone as young as Jasmine endures due to inhumane policies that persecute millions of families in the United States.

Using figures drawn with sharper angles and in solid colors, the narrative here juxtaposes his memories of the lake with his time in the dehumanizing detention center. The fast-paced editing used to contrast these two eras from Eduardo’s past creates, at times, a noticeable dissonance rather than a fluid association of ideas.
Meanwhile, the quasi-experimental effort Quantum Cowboys intermingles unaltered live-action footage, live-action sequences with actors in front of animated backgrounds, rotoscoping, and even stop-motion animation to materialize its metaphysical ideology about multiple timelines coexisting, and the manner in which art helps preserve a unified memory.
Told in its subjects’ own voices, the touchingly opportune animated documentary Home is Somewhere Else, from co-directors Carlos Hagerman and Jorge Villalobos, weaves together three stories centering on undocumented youth and mixed-status families whose interstitial lives thrive on resilience amid uncertainty and loss.
Production: Brinca Animation Studio, Shine Global, Carlos Hagerman, Alexandra Blaney, Mariana Marin, Guillermo Rendon Rodriguez, Andrew Houchens, Susan Maclaury, Albie Hecht, Martha Sosa, Carolina Coppel / Artistic director: Marec Fritzinger / Storyboard: Alejandro Valle / Animation: Andrea Mondragón, Sara Páramo, Alejandro Caballero / Music: Javier Alvarez / Sound: Pablo Lach.
But their innocuous journey becomes complicated after the group learns that a pair of malicious time travelers are after them. Occasionally, the narrative zooms out from the plot so that Memory (Patrick Page), a character that oversees the action from a control center, can preach about the heady concepts of time, space, and creation, most of which lack resonance.
Hagerman and Villalobos succeed at portraying each person beyond their status, or lack thereof. The film finds moments of joy to highlight and endearing passages of everyday victories that enrich our perception of its characters. These are not extraordinarily talented individuals or those who have survived the most harrowing experiences, but average people who, as much as anybody else, deserve peace of mind and opportunities to live freely.
Beneath the complex philosophical discourse lies a simple bromance, not unlike those found in many traditional Westerns. And while the bond that unites Frank and Bruno remains mostly superficial to our eyes, their paths continue to meet despite the hurdles that pull them apart throughout. From an image-making standpoint, the feature feels the most cohesive and artistically economical in snippets where the characters exist as outlines over one-color backgrounds.

While the entire film is animated using a digital 2d technique, each of its chapters sports a distinct aesthetic. Delivered in Spanglish by a spoken-word poet self-anointed as “The Deportee,” the film’s three verses function as an imaginative framing device that contextualizes the immigrant plight.

Even the novelty of the eclectic mixing of techniques loses its charm as it continuously fluctuates for no clear reason. Muddled as the story ultimately appears however, the fact that Marslett refused to take a conventional cinematic route to telling his story merits praise.
The film’s final episode tells the story of “The Deportee” himself, José Eduardo Aguilar. It details the narrator’s early years in Heber, Utah, when he would go fishing with his father, and how as a college student he got involved with other undocumented teens like himself to protest the rise of xenophobic laws. Eventually, his efforts landed him in prison and in deportation proceedings.
Painterly backgrounds and elegant character designs with defined linework transport the audience to both the small town of Dzoncauich in the Mexican state of Yucatan, and to the urban landscapes of Los Angeles, California. The segment’s artistic styling is used to highlight the separation of its two protagonists: sisters Evelyn, born in the U.S. but living in Mexico by choice, and Elizabeth, born in Mexico but brought stateside as a kid.
Although expressive and magical realist imagery permeates each of the film’s anecdotes, the second segment stands out as an example of the filmmakers’ cleverness. 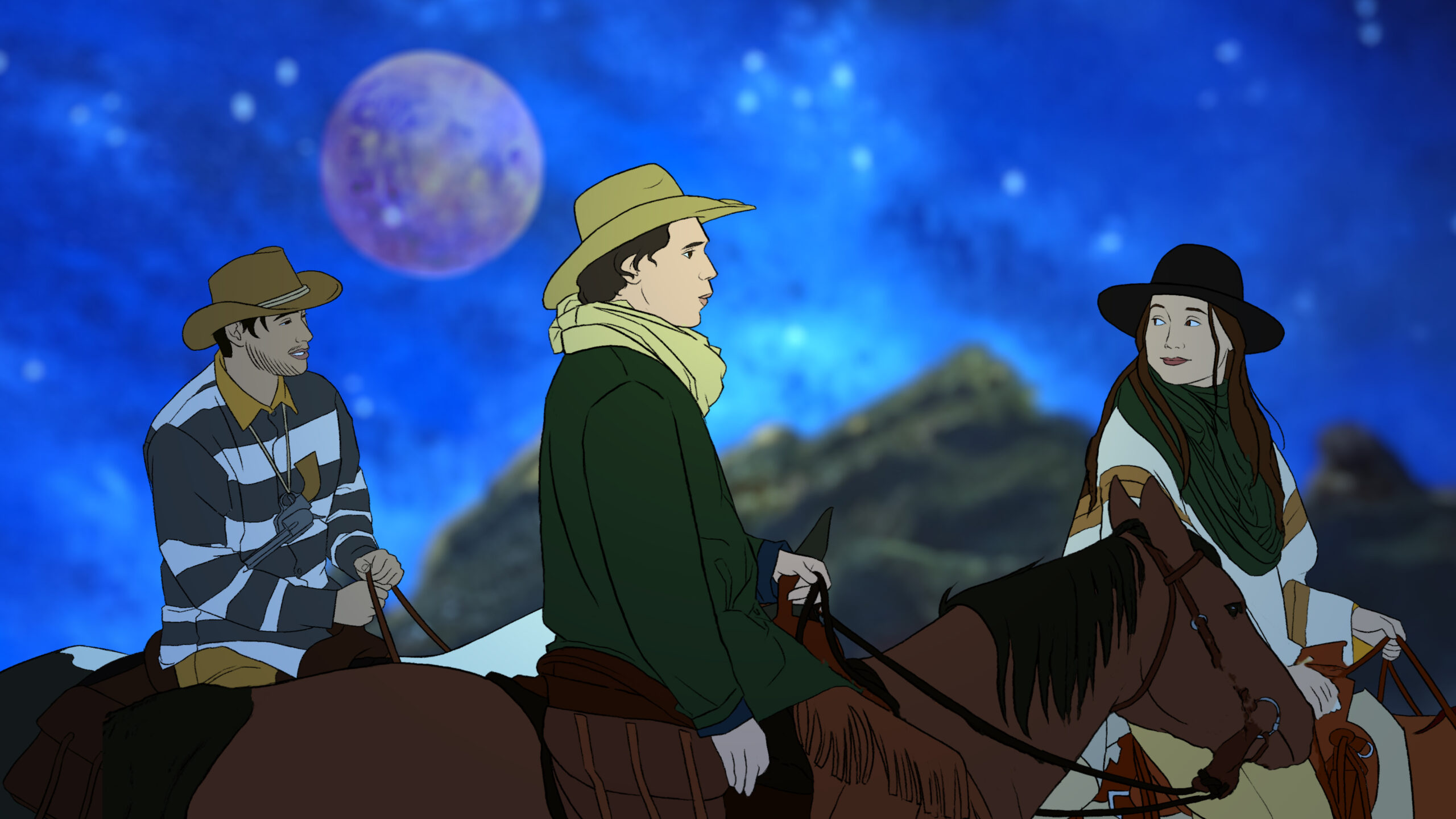 Still, as impressively innovative as Home is Somewhere Else is in its storytelling approach, the film could benefit from hand-holding its audience a bit more and clarifying concepts such as DACA and other intricacies of the United States’ immigration system responsible for all of the suffering on display.