The Sandman currently sits in the top spot on Netflix’s English-language tv rankings for a second week in a row, and the series has appeared in Netflix’s Top 10 in 93 countries.
[embedded content]

One of the great things about the comic is that it’s done by lots of artists. They have different people drawing different kinds of stories. Of course I read the comic, but it’s very different from my style. Also, in a comic or a graphic novel there are really different ways of telling stories than in animation. It’s a different language than film. Film is more rigid, there is less wiggle room for things like camera angles because you might confuse the audience. So, I did read the comic, but when Allan sent me the script, I started doing what I’m used to. I put the script on the left side of my table and on the right I started doing my thumbnails. Dream of a Thousand Cats is a beautiful comic, but I had to put it aside completely and work from my own imagination.
You know, my favorite animated film is Bambi. It’s still Bambi. So, at some point I was like, all the painted backgrounds, and even though the animals in that film are more anthropomorphized… it’s hard to explain but somehow the warmth of the real paintings and the handmade feel of that, that’s something I thought about.

Hisko Hulsing: I was actually the first person that Warner Bros. approached, even before they approached the live-action directors. They had seen Undone, a show I did production design on and directed for Amazon, and they knew my short film Junkyard and the Kurt Cobain documentary Montage of Heck. I don’t know exactly what they felt attracted to, but I imagine it was because my style is very realistic in many ways, but not photorealistic. It’s painterly and dreamy at the same time. It’s grounded in reality, but it’s trippy. I think that’s what they were looking for with A Dream of A Thousand Cats. 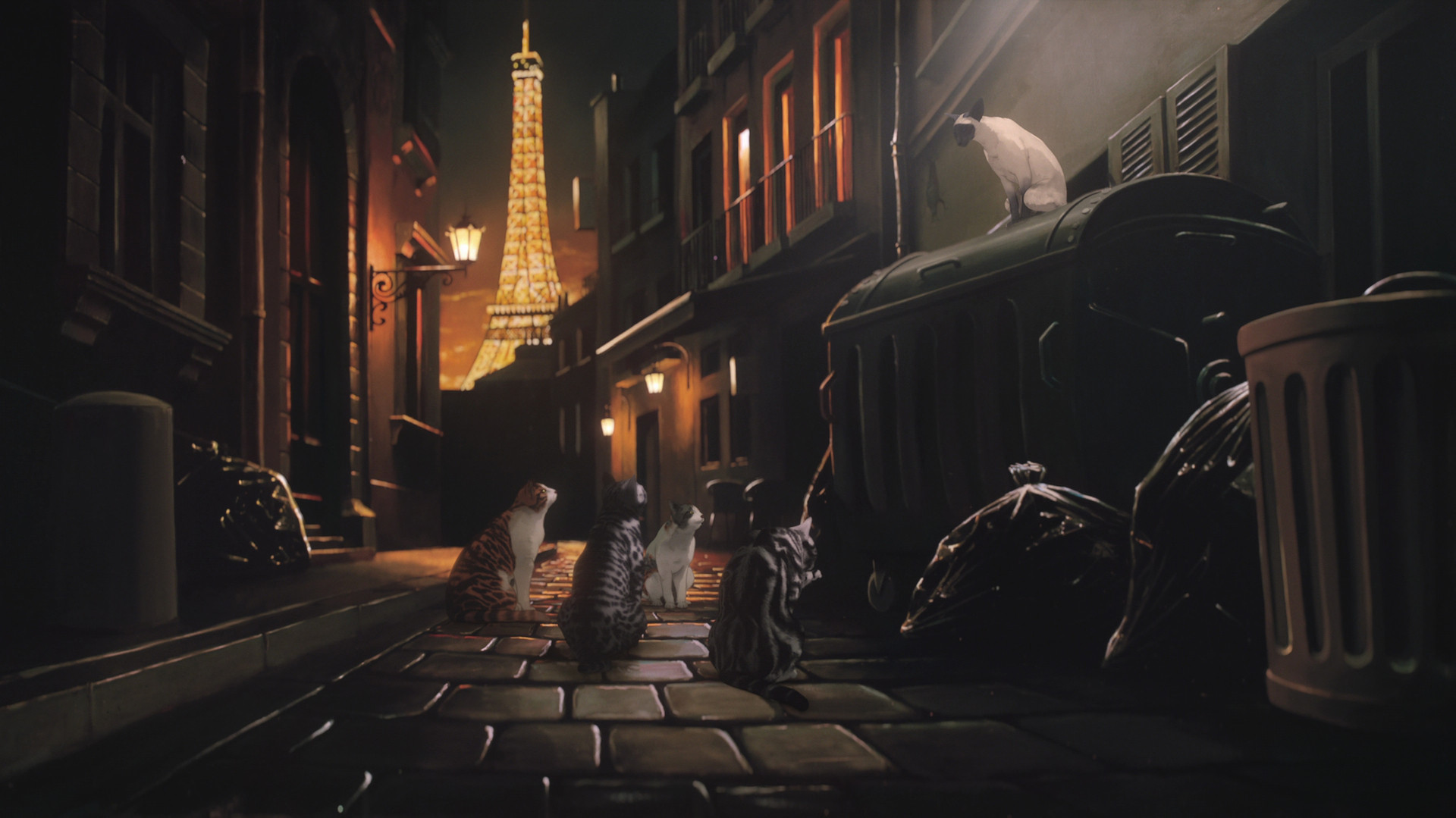 But for the cats it was more complex in a way, especially because we were working between two studios – Submarine here in Amsterdam and Untold in London. Even more complicated because we work in Blender and they work in Maya. So, they would do the 3d animation of the cats with full rendering first. They worked on the Lion King remake, and because in that film the backgrounds are also photorealistic, the fur on the 3d cats they sent us was also photorealistic. But because this episode had a painted style, we would take that 3d animation and we would stylize it. We had about 20 people rotoscoping the cats to look more painterly. Our cats are very stylized and everything is hand drawn.

Warner Bros. first reached out to me before I started on the second season of Undone. For the first season of that show, I was going back and forth between L.A. and Amsterdam to direct the live action we needed for the rotoscoping. Before season two, the pandemic broke out so I had to direct everything in L.A. from my chair here in Amsterdam with five screens in front of me at four in the morning. I needed to finish the second season of Undone first because I had so much on my plate already. So, we started in April [2021], but we were finished by January. So about eight months it took us to do our part of the episode.
Animation is no stranger to anthropomorphic animals, but your cats don’t feel anthropomorphized at all apart from their dialogue. Was that a conscious decision on your part?
I went to London in July of 2021 to shoot the live-action scenes for rotoscoping. That’s a funny story because my second day on set was my 50th birthday. I didn’t tell them it was my birthday, but my assistant must have told them because I was directing 30 naked extras and suddenly everyone on set started singing to me, and it was the craziest birthday imaginable. But from there the technique was like what we did on Undone, rotoscoping the live-action footage I shot in L.A.
Exactly zero. I only ever got links to some rough edits of the live-action parts, but it wasn’t very much. Also, this episode was a bonus episode and my part was fairly short, so the showrunner Allan Heinberg told me that he completely trusted me and believed in every decision I would make. I was also working in Amsterdam rather than London or L.A. with the live-action teams, so that gave me quite a lot of freedom.
Neil Gaiman’s Netflix series The Sandman, produced by Warner Bros. Television, launched a two-part bonus episode in the wee hours of the morning on Friday, while many in the U.S. were still visiting the kingdom of Morpheus. 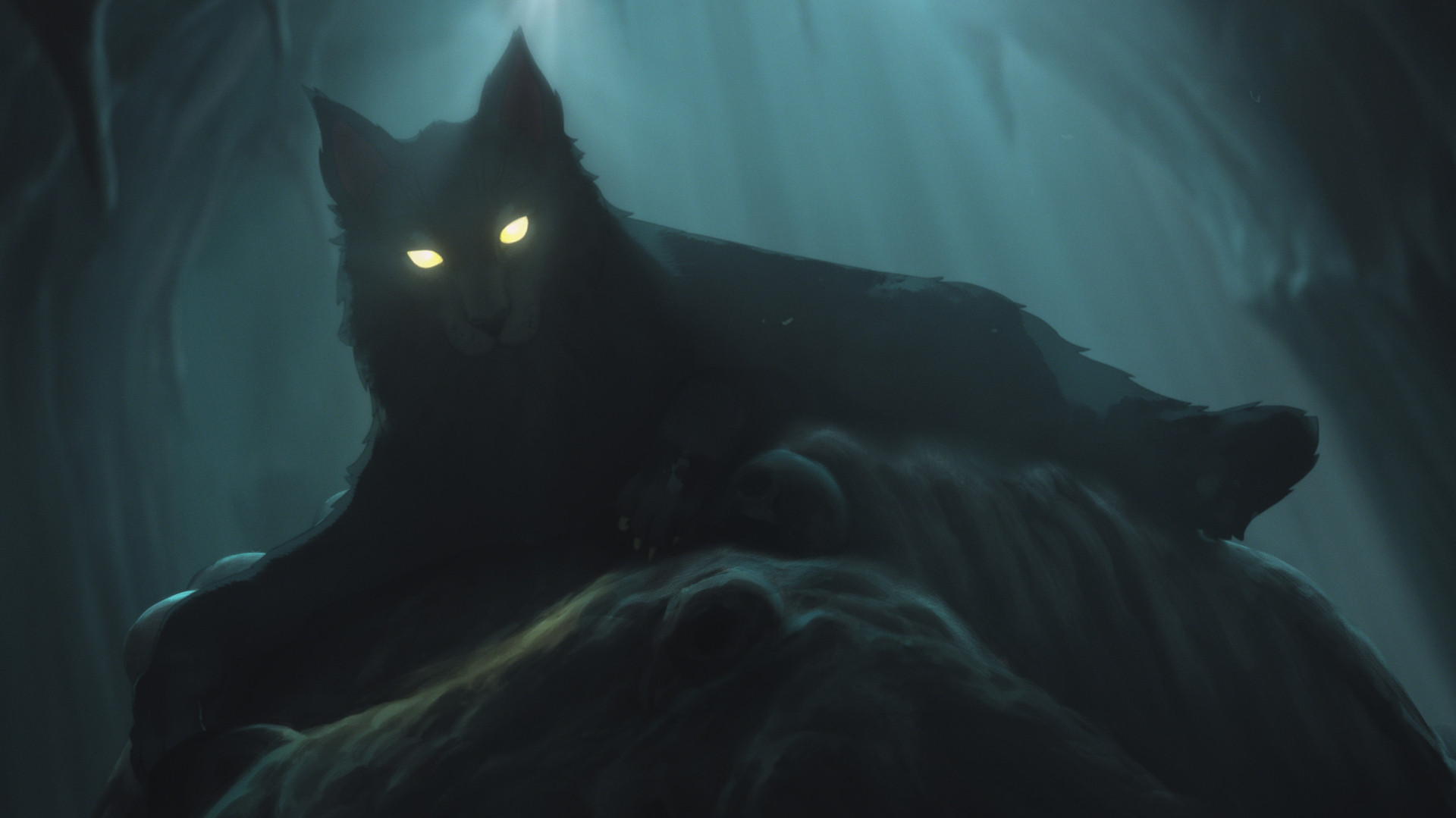 Cartoon Brew: How did you land the gig?
For the episode’s launch, we caught up with Hulsing to discuss his role in Netflix’s latest phenomenon.
One thing I learned in my time working as a storyboard artist is that if you have an animatic that is very solid, the process goes quickly. The producers of Sandman and Neil Gaiman himself were sort of blown away with how thorough our work was. Normally I get two or three pages of notes, but the Sandman producers only had like five notes for us.
And what was the process like after getting your boards approved?
How did you decide on the aesthetic for this episode and were there aspects of the live-action episodes that you implemented in your contribution? 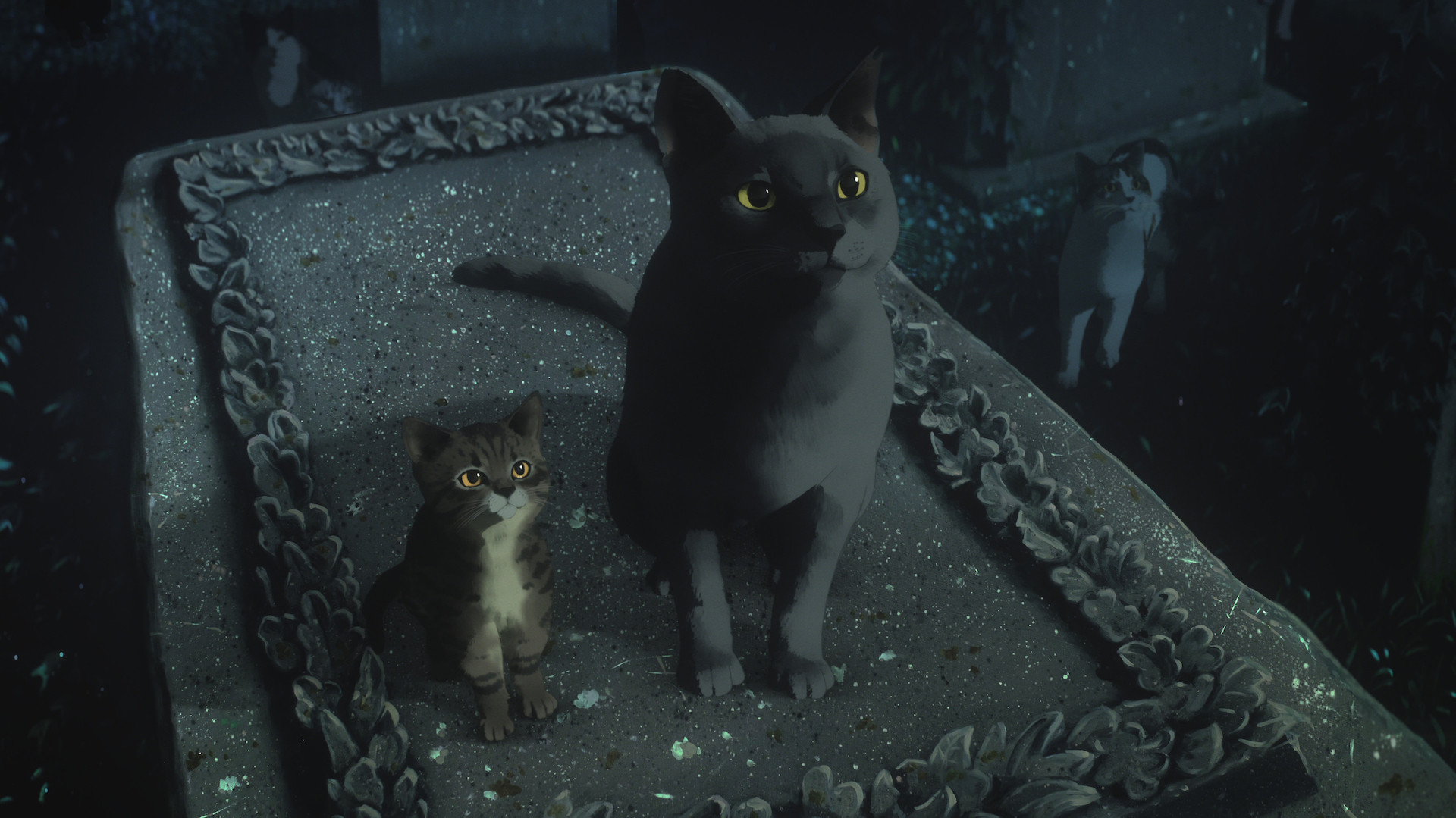 How much time did you have to work on your part of the episode?
The first half of the surprise episode is an animated adaptation of the Sandman side-story A Dream of a Thousand Cats, featuring direction and production design by Dutch filmmaker Hisko Hulsing (Undone, Junkyard). Submarine in Amsterdam and Untold Studios in London shared duties animating the episode.
How did the development go?
What about the artwork from the original comics? Was there anything there that you wanted to implement in your work?
That’s one thing I was worried about. I made the decision not to do lip sync because that’s the way it is in the comics. The cats speak with a kind of telepathy. The whole point is that these are real cats. We made sure that the cats moved in sync with the dialogue, but they shouldn’t be acting. They should move like cats move. Even in their history where cats rule the world, they still behave like cats. They toy with the small people and torture them. Normally in animation there is a character designer. So early on there were talks about us having a character designer, but I said “No, we don’t need that.” We just did online searches for cats that we would like to see in the show, then we sent those to London to Untold Studio and they would model the cats based on those images. So that’s how we handled character design.
Was there anything specific that did influence the aesthetic of the show? 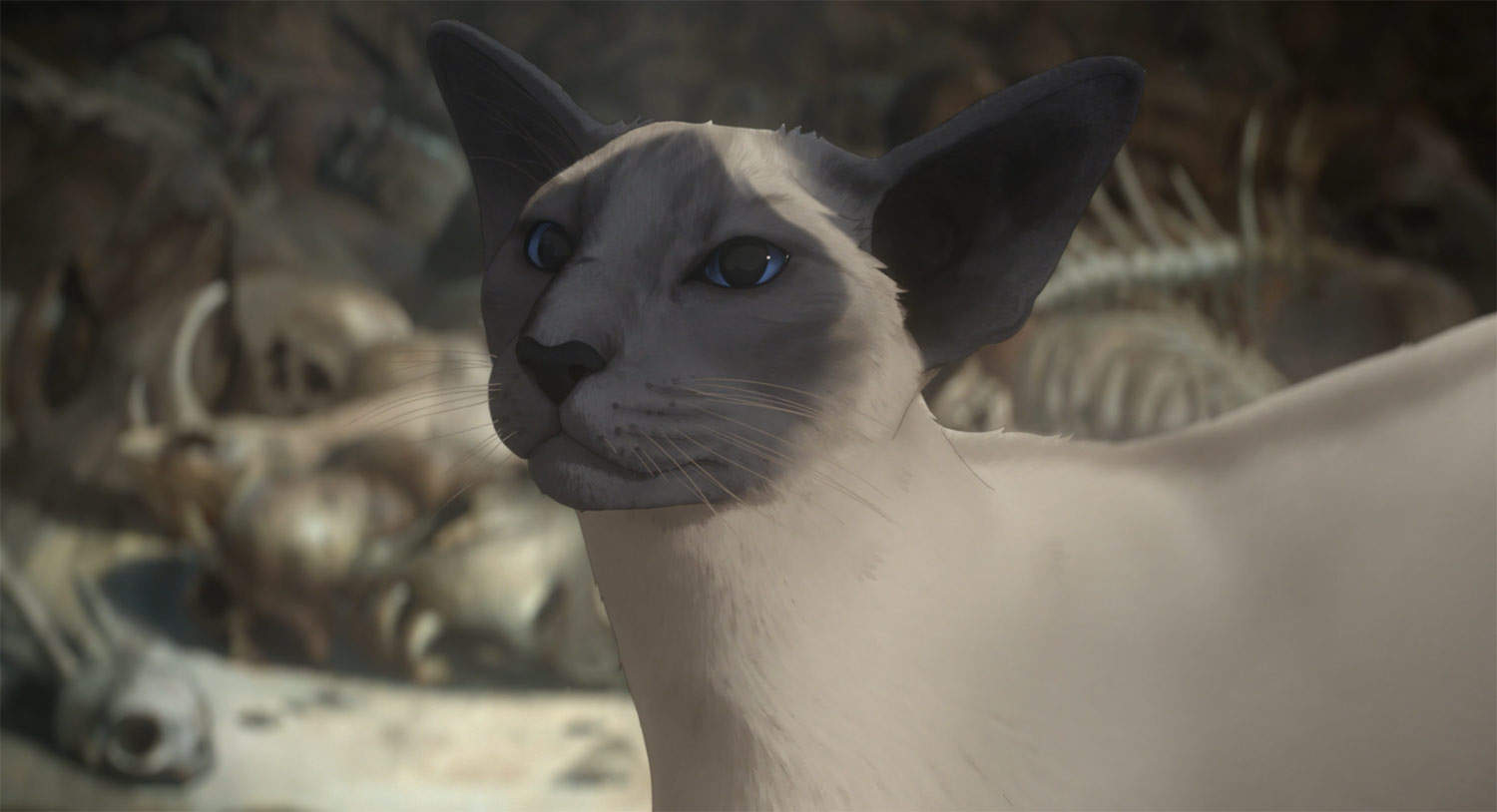