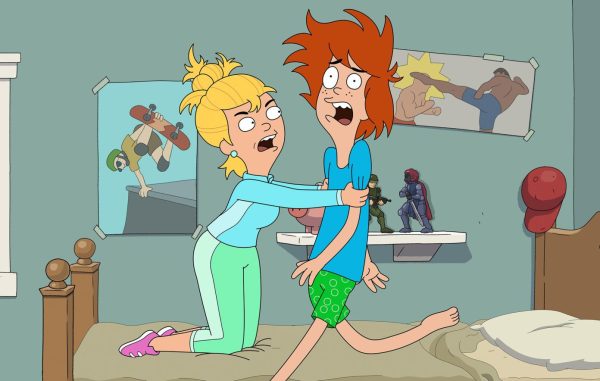 Remember HIM; the villain from The Powerpuff Girls? Read about the Beatles cartoon that inspired Craig McCracken to create him.

This week we also said goodbye to one of France’s comic icons Albert Uderzo. Uderzo co-created and co-produced Asterix for many years with partner René Goscinny until his death in 1977; after which Uderzo produced the series by himself until 2011.
Lastly, we’ve seen inspiration for animation from just about everywhere, but Facebook stickers is the latest source. ‘The Anooki’ will star in their own feature film which is the greatest leap from phone screen to big screen since Angry Birds back in 2016. With the live-action hybrid film featuring a [timely] environmental theme, this could be yet another European film to showcase the continent’s extensive creative lead over Hollywood. Check out the animated GIF on the film’s website too.

Steven Universe ended (for real) this past Friday and creator Rebecca Sugar discusses it with both Animation Scoop and Entertainment Weekly. There’s a lot of emotion, but well worth reading to see how the definitive animated show of the 2010s will be remembered.

The award for potentially contentious article of the week goes to this one: 5 Things Japanese Anime Does Better Than Western Animation (& 5 Things It Does Worse) Do you agree or disagree?

A selection of the best animation articles including news, opinions, and features from around the world for the week beginning the 29th of March, 2020.
New trailers this week include the new series from Rick & Morty co-creator Justin Roiland: Solar Opposites. Watch the trailer and decide for yourself if the influences are a teensy bit too obvious:

Found a cool animation article that you enjoyed reading and want to share? Send it in!
If that’s not enough, we can also look forward to yet another animated series produced by a celebrity known for other things. This time Amy Poehler returns to the field after a nine-year absence. Duncanville is not a kid’s show however and will actually air on Britain’s Channel 4 prior to its American premiere.
Coronavirus/COVID-19 continues to dominate news and adversely affect animation releases but production on many films and series’ marches on as announced last week. How production is fairing with artists and crew working remotely is investigated by Deadline.

Quarantined and otherwise restricted audiences get even more animated treats this week. Feature film Sonic the Hedgehog arrives on digital this Tuesday. Samurai Jack is also available free on [Adult Swim]’s website in its entirety; no account needed.