Sidebar
Browse
I have no previous experience with live action, but I have a few projects that lend themself to the medium. We let the story dictate the medium, and for this short in particular, it made sense to do live action with a “sharpie” 2d animated character.
As far as my effects work on the short, I just tried to keep from stepping on Trent’s always-charming character work. The conversations about this were my favorite parts of the process. I assume people think we just phone it in because it’s what we do every day, but we actually talked through the beats and took it very seriously. I’ve always loved the process — it’s what makes me feel like a filmmaker.
[embedded content]

I started with the toilet paper spin and animation comp, since it was going to be the most challenging. When spinning the roll at a fast rate, it would bounce so much that it would break the illusion that the animation was on the roll, or the large movement of the animation would make it hard to focus if we tracked and matched it.

One of the other big challenges was tracking the shots of the camera moving around to the side of the toilet paper roll. With the toilet paper spinning and the camera moving in so tight, the tracking software didn’t have any points to lock on it. I had to bring the shot into Blender and roughly match-move a checkered cylinder to the toilet paper, import the render into the tracking software, and track that. Then I was able to apply that data to the animation.
Andrew Feliciano: There weren’t too many difficulties when coordinating the project under lockdown, but we did have to be sure to isolate before shooting. Oh, also, Adam did have to turn his apartment into a shooting set for a few months. He did countless live-action tests leading up to our shooting days, and that meant that his bathroom was full of camera and lighting equipment. For me, one of the characteristics we wanted for the main character was a quarantine beard. That was easy for me to grow, but difficult for my wife to handle, haha.
Although they took joint credit as creators, the quartet clearly delineated their roles on the production. Correy, who conceived the project, did the character animation, while Lund was responsible for the effects animation. Strick masterminded the live-action shoot and Feliciano played the main character. Friends and colleagues lent helping hands.

On March 12, 2020, as lockdowns loomed and the nation scrambled for toilet paper, Walt Disney Animation Studios sent its employees home. A year later to the day, with the pandemic still raging, staff continue to work remotely.
It was more of an overall structure and not a lot of locked dialogue, so it was great having Andrew come in and riff and improvise during the shoot. The opening sequence consists of a few different takes cut together to create the dialogue between Andrew and the other Zoom participants. The only thing left to do was buy a lot of toilet paper!
Trent Correy: I found a meeting on my calendar labelled “24 Hour Film Project” from May 23, 2020. The concept for the film actually dates back years, almost a decade. As a fan of traditional animation and bathroom humor, I couldn’t help but think of the endless possibilities of using a toilet paper roll as a zoetrope and combining two of my favorite things (I’m half-joking). For years this project took different forms as an animated short, a series pitch, and a children’s book, but really it was just a creative outlet between other projects for a laugh.
The short was edited and color-graded in DaVinci Resolve, the 2d animation effects were created in Adobe After Effects and tracked with Mocha AE, and the sound design and mix were done in Adobe Audition. I edited a few different music tracks from Artlist.io and used drum samples from reelloops.com. 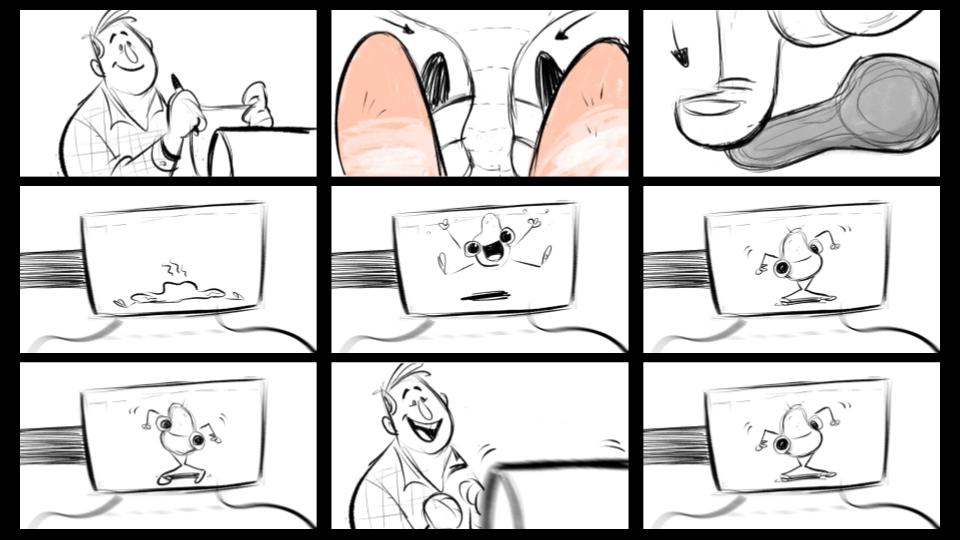 Lund: I miss the in-person interaction, but it’s nice to know that if you’re passionate about something, you can find a way. It might actually force you to be extra-flexible and open to true collaboration. I look forward to whatever creative adventure our foursome stumbles into next.
Dan Lund: I was working on my own quarantine project and randomly sending cell-phone video of my progress. Trent then began sending me footage of his test animation of the cupcake character. It was thrilling to see I wasn’t the only one desperately trying to use the isolation to my advantage.

With some knowledge of color grading, and having originally gone to school for audio engineering, I figured I would take on editing as well to avoid dealing with transferring files online. Filming at a high data rate, doing the sound and color grade, I felt like it’d be simpler to keep it all contained on one system. The four of us would meet up virtually to discuss edits as they were ready. It would have been great to have a larger team though!
Adam Strick: Trent’s core idea was the foundation for the short. From there we went to tie it into the pandemic. I wrote a few scripts and sent them back and forth to Trent so I could get an idea of what I was going to be filming. During one of the calls, Trent came up with the idea of it revolving around a birthday, so I wrote one final draft to get started.
I did some basic comp tests with a short animation cycle Trent did early on to get a feel for how fast we wanted the toilet paper to spin, how closely we wanted the animation to track with the toilet paper, and what types of textures/effects we could apply to make the animation line appear as a magic marker. I sent them to the others for feedback, which also helped inform the final size of the cupcake character.
The film is the work of animator and director Trent Correy (animation supervisor on Frozen 2, director of Drop), animation supervisor Andrew Feliciano (Raya and the Last Dragon), animator Adam Strick (Ferdinand, Frozen 2), and effects animator Dan Lund (The Princess and the Frog, Winnie the Pooh). They produced it independently.
We were all excited about working in live action, a medium outside of our normal, and it was right for the story. I enjoy writing and editing a cheesy video every now and then for our animation department, but nothing as involved as what we did for this short. Adam and I have worked together in the past, so I knew he was going to pull out all the fancy gear!

On May 23, 2020 — after two months of working from home, the toilet paper outages, the panic, the rollercoaster of emotions, and trying to figure out the new “norm” — I pitched the idea to Adam, Andrew, and Dan as a “24 Hour Film Project” that we could all complete in isolation to help fill our new “spare time” and stay creative. At the time, the idea was a one-minute gag short of a character on a toilet paper roll. Thanks to the collaboration, we expanded the storytelling and took a little longer than 24 hours to execute it!
When I was finished with my short, Trent had pulled in Andrew and Adam, developing it into a live-action short — this is when I got truly excited about being involved. I knew the live action was going to bring an energy and a bit of the unknown to this project that I, for one, needed.

Strick: I’ve worked remotely in the past, which I really enjoyed, but having businesses closed and not being able to meet up with friends adds a completely different layer to it. I miss being in the building and working closely with so many talented people. Staying busy with personal projects provides a nice distraction from overwhelming events happening in the world that are out of our control. I agree with Andrew. I definitely miss Disneyland!
Feliciano: Although I’m very excited for the day when we can all be back together under one roof, it’s also been really amazing to see how you can continue to create and grow while working from home. I’m also very lucky to have a close group of friends that make the effort to stay connected in this new virtual hangout environment, and as a social person, that has helped keep my spirits high and looking on the bright side of a tough situation. I really miss going to Disneyland though!
I have some experience shooting a lot of personal lighting tests and a few short films in live action. I began taking it more seriously over the past few years by studying cinematography in my personal time and purchasing a variety of camera, lighting, and grip equipment.

There were three main challenges: shooting in a very small space, making the toilet paper spin, and getting the 2d animation composited and locked to the roll. I went through a series of tests for each and the workflow developed along the way, since I’m not a compositor.

In terms of developing it, we were all just excited to collaborate on a project and do it for fun — not for work, not to try and sell it, just for a creative outlet. At the time, Dan had inspired me with his own quarantine short Quarantine Dream, Andrew had been working away at his own animated musical short, and Adam is constantly making live-action shorts and experimenting with techniques.
The production unfolded on and off throughout the pandemic, fitting around day-job duties on productions like the studio’s recently released Raya and the Last Dragon. Prep for the live-action shoot was disrupted by the occasional obligatory quarantine; at one point, Strick’s fiancée Rachel Arnsdorf (a focus puller on the film) had to self-isolate after coming into contact with a positive case.
But they persevered, finishing the film in time to mark the anniversary of a very strange day. Below, they tell us how the project came about, how they navigated the challenges along the way, and how they feel after a year’s absence from the office. 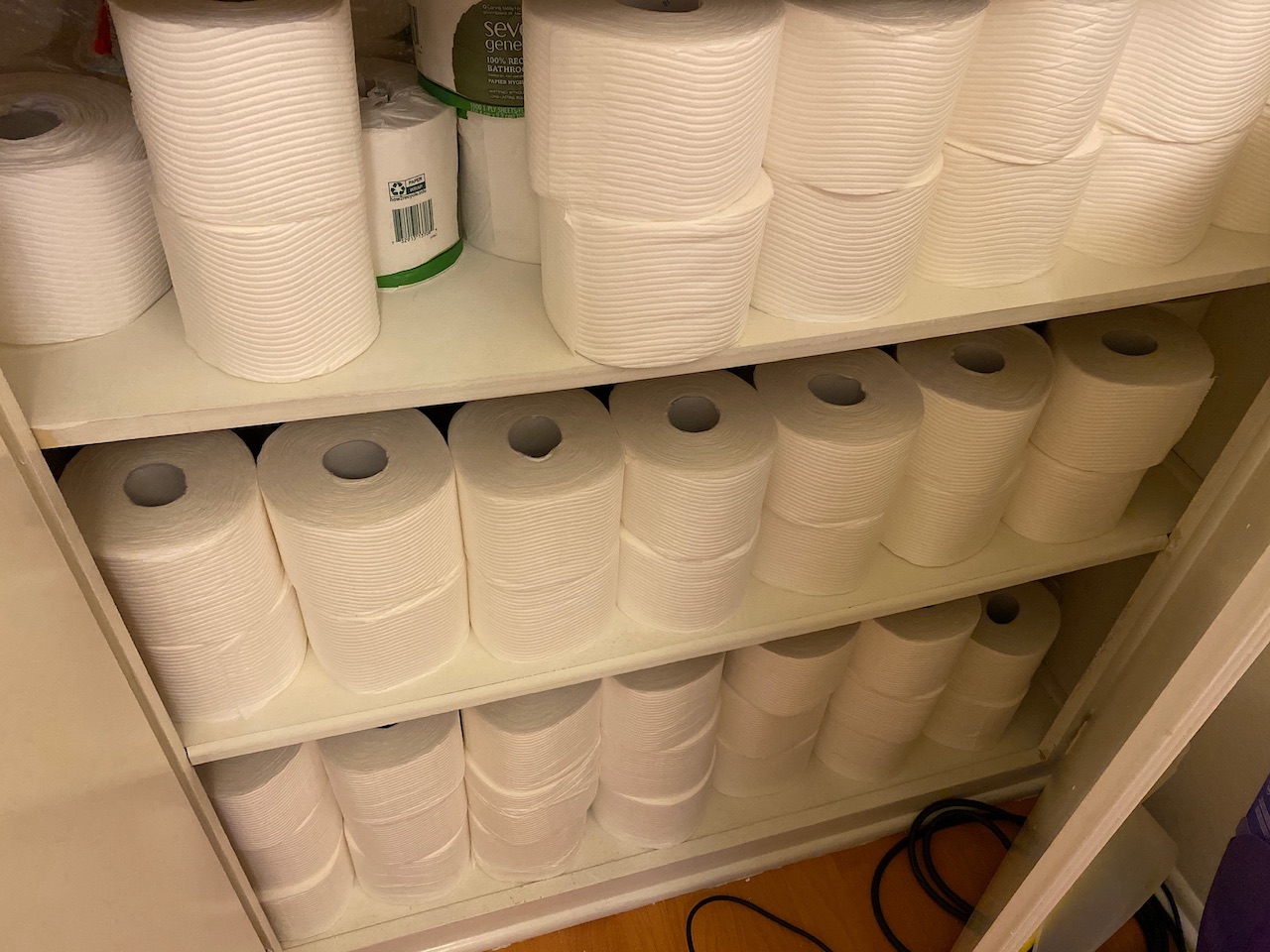 Correy: I go in and out of adapting [to remote work]. Work-life balance, health, and other priorities are always a juggle. With this project, I constantly reminded myself, “This is supposed to be fun, it’s a cartoon, don’t stress or take it too seriously.” I am looking forward to the days of being back in the building and collaborating — oh, and human contact!
For four housebound Disney artists, the past year presented an opportunity: to revive long-standing creative ideas, experiment with the medium of live action, and commit some of their musings about toilet paper to film. The result is Cupcake Quarantine, a hybrid short produced entirely in the pandemic, which Cartoon Brew is delighted to premiere exclusively:
For the lighting, I tried a variety of set-ups in both the living room and the bathroom. Ultimately, I wanted our main character to begin in warmer light while he’s on the virtual call with friends then move to cooler light after he’s disconnected. The bathroom is brighter for the newly created friendship, and to hold an uplifting tone during the sequence. Overall, the short is more colorful and saturated to blend with Trent’s imaginative idea.
The interviewees’ answers have been edited for brevity.