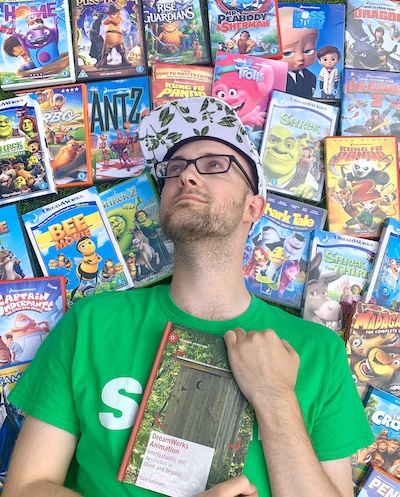 Meanwhile, Shark Tale is hampered by cultural stereotypes: Italian American actors play gangsters, African Americans play “hustlers.” Summers writes: “[T]he likes of Shrek and Shark Tale celebrate the ‘irreverence’ of their fantastical protagonists while failing to reconcile the racial, ethnic, and gender stereotypes and inequalities that their stories tangentially invoke … [T]his ‘irreverence’ masquerading as subversion means that it cannot truly be said that, ideologically speaking, the studio’s cg films represent a substantial affront to Disney in the way that Warner Bros.’ Golden Age work has been argued to do.”

Ultimately, Dreamworks didn’t completely rewrite the Disney formula. In some cases, it followed the Disney playbook quite closely. The studio’s influence on the industry has been significant, but stops short of revolutionary.
Dreamworks Animation: Intertextuality and Aesthetics in “Shrek” and Beyond by Sam Summers. Palgrave Macmillan, 242 pp., 2020.

Summers acknowledges the limits of Dreamworks’ subversiveness. The “narrative-cartoonal mode” of their films didn’t put an end to the Disney model (Summers notes that even Dreamworks made Disneyesque films like The Prince of Egypt and Spirit: Stallion of the Cimarron). And as Summers rightly points out, Shrek failed to upend Disney’s princess archetype. Fiona, for all her belching and kung-fu moves, is still often a “damsel in distress.”
In his new book, Summers, a lecturer in animation history and theory at the U.K.’s Middlesex University, argues that Dreamworks triggered a rupture in the animation industry. It did this with its pop culture nods and winks (or “intertextual references” if you prefer a more scientific label, as good academic soldier Summers does); contemporary pop songs; celebrity voice actors; and use of satire, parody, and pastiche. This, in his view, is particularly true of Megamind, Kung Fu Panda, Bee Movie, Shark Tale, and the Madagascar and Shrek franchises.
Using a mix of animation/cultural studies references — Paul Wells, Maureen Furniss, Umberto Eco — along with a litany of examples from assorted Dreamworks films (most prominently Shrek), Summers also attempts to uncover the influence these traits have on the story (e.g. how the use of a specific pop song can impart meaning to a scene solely through its lyrics) or on the characters (e.g. a character played by Mike Myers, Eddie Murphy, or Will Ferrell is going to come preloaded with expectations from an audience).

In each chapter, Summers offers a fascinating and detailed breakdown of what he sees as a primary characteristic of Dreamworks films, such as comedy, music, celebrity voice actors, or satire/pastiche. (There is also a “bonus” section focusing on how the studio’s works have been reappropriated online via fan-created memes and videos.)
This “Shrekoning”, as Summers terms it, eventually triggered a split from the dominant Disney model as more and more studios (e.g. Blue Sky, Nickelodeon, and Sony) embraced Dreamworks’ more contemporary, self-referential, pastiche-heavy tone. Even Disney features, like Ralph Breaks the Internet, have fallen in line with a strong use of meta-humor.
While Pixar tends to get all the love, flowers, and swooning for their impact on the cg animated feature, Sam Summers suggests that “on a narrative and tonal level” the influence of Dreamworks Animation has been more profound.
This approach to animation, as Summers acknowledges, was not entirely innovative. Tex Avery at MGM, Looney Tunes, and the like frequently played around with the audience by making contemporary references, breaking the fourth wall, and almost never allowing the audience to forget that they’re watching a silly work of fiction. Still, in the context of American studio animated features of the early 21st century, the Dreamworks approach felt quite fresh. Dreamworks was certainly not the first to use celebrities as voice actors, but, according to Summers, their first 31 films featured 310 known actors.
For Summers, Dreamworks’ playful, self-referential narrative approach marked a break from the more dominant “realistic” worlds of Disney and Pixar features. (“Realistic” is a tricky word to use with animation, but what Summers seems to mean is that Disney and Pixar films create largely logical, self-contained worlds. You typically don’t see Elsa, Raya, Woody, or Buzz acknowledging the audience or making pop culture references like in, say, Shrek.)