Sidebar
Browse
How much footage were your animators expected to do weekly?
In terms of security, we also had to have our “work-from-home” procedure approved by Netflix. Luckily, the methodology implemented by our IT team (remote access over VPN) on day one of the lockdown was compliant with the security recommendations and we were able to keep the schedule on track.
How to describe City of Ghosts, a new series that leafs through the many layers of Los Angeles’s past? Its creator Elizabeth Ito has disavowed the word “mockumentary”: she didn’t set out to mock anything. Cultural history? Psychogeographic fantasy? But those terms make it sound like an academic tract, when in fact it is a funny, bottomlessly benign show made with children in mind.
[embedded content]

The animation on City of Ghosts was different from other shows the team and I were used to, but we were lucky to have clear feedback from Elizabeth and Luis on what they wanted to see. They wanted to keep the poses and animation as simple and clear as possible. Let the characters talk. Let them breathe.
We also had a weekly call with the teams over at Netflix and Chromosphere, to keep in touch and discuss any subjects that came up during the week. It was challenging, but in the end I think we were mostly just very happy to be able to keep working during all the weirdness of 2020!

Nikijuluw: Seven seconds per day, so 35 seconds a week per animator. This is a pretty demanding quota, but due to the style of City of Ghosts and Mariah’s guidance of the animators, we were able to maintain this rhythm nicely.
The backgrounds are based on photographs. What influence did this have on your approach to lighting?
The voices are naturalistic, too. How does this inform the animation?

The animation was done in the pandemic. Did this pose any challenges?
How big was your crew?
Cartoon Brew: The animation is more restrained than in many kids’ shows. What kinds of rules did you set up with Elizabeth Ito about how the human characters could move?
On the pipeline side, the fact that we are using our own production tracker software helped us quite a lot. Having the real-time production information handled with consistency, and using predictive tools to generate accurate conclusions out of these data, were particularly helpful in this context.
The show’s quasi-documentary approach is supported by its visual choices. The backgrounds consist of photos by Kwasi Boyd-Bouldin painted over at L.A.’s Chromosphere Studio (which was behind the production design and compositing). Perhaps even more strikingly for a kids’ show, the cg character animation, by France’s TeamTO, is naturalistic and subtle. Even the ghosts behave, a lot of the time, much like real people.

How did TeamTO work with Ito and her colleagues at Netflix Animation to produce such an unorthodox series? To find out, we spoke to three people at TeamTO: animation supervisor Mariah Luna, production manager Jaimy Nikijuluw, and president and co-founder Guillaume Hellouin.
You worked with Elizabeth on her short film Welcome to My Life, which used a similar style. How much overlap was there in your techniques and overall approach to the production?
The voices are fantastic in this show, and really helped to set the rhythm. Elizabeth was very open to suggestions from the animators and Mariah; the animators loved the creative process on this show.
Guillaume Hellouin, president/co-founder: In terms of techniques, the most visible difference came from the ghosts themselves. Their cloudy look required us to develop physical simulations and volume rendering. We used Houdini and Renderman software, which are both integrated in our pipeline. 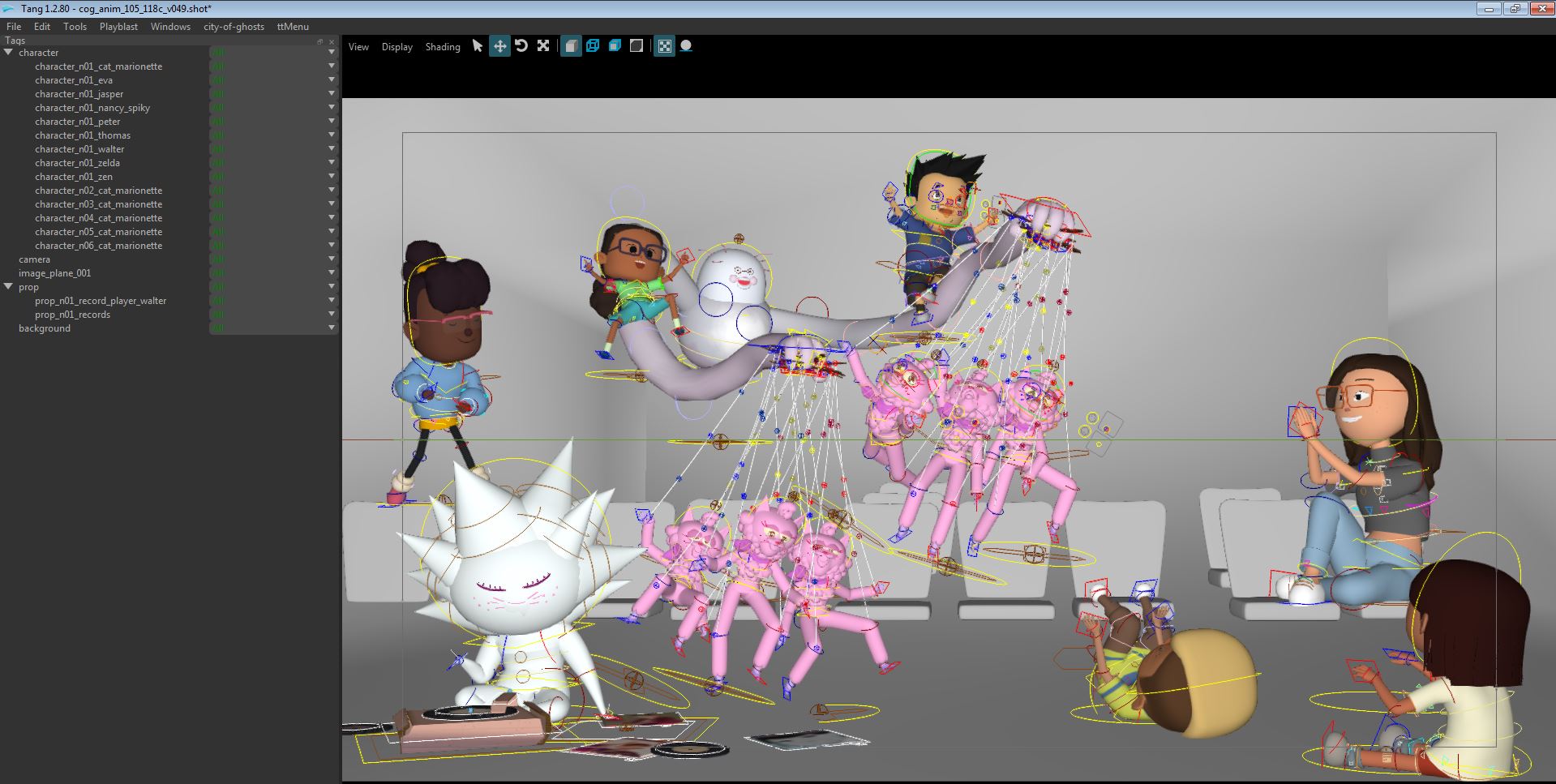 The more we got to know the characters, the easier it was to let their voices and message take over the shot.
We watched some animation tests for Janet, and it was nice to see how sweet she looked. We really wanted to keep this sweetness throughout the episode. It seemed very fitting for her personality. Other ghosts, like JMD, were a lot more active, even a little provocative. I love the shots where he’s drumming on Zelda’s head.
The six-episode series, which is on Netflix, is simple in its premise: a group of children venture out to interview the ghosts of L.A., each of which represents a notable denizen of the city in real life. The characters — ghosts, kids, and adults — are largely voiced by non-actors, the scripts developed around historical research and interviews with said denizens. The result is a rich anecdotal portrait of some of L.A.’s most interesting places and communities: the Bob Baker Marionette Theater, the Venice skaters, the Tongva people, Koreatown.

What we mostly missed was being able to interact in person, for Mariah to give live feedback to the animators, and to enjoy watching finished episodes together while sharing cakes and croissants. Those moments were replaced by video calls, which are not as personal but of course became essential while working from home. We had regular calls just to catch up and see how everyone was doing, and organized some games and challenges with the team.
Nikijuluw: The whole team was up and running remotely within two days after the lockdown was announced. The technical team had prepared everything exceptionally well and we kept up the deliveries as planned until the end of production. Our in-house production management tool helped a lot to keep track of every department remotely.
Luna: We talked about the ghosts’ behavior in the beginning and how they should act or move. But since each ghost represents a different person, we had to adapt according to their personalities.
Mariah Luna, animation supervisor: It was not easy in the beginning. We wanted to make the characters super active, moving around, using their hands all the time, but after talking to Elizabeth and Luis [Grane, supervising director], we understood: the characters didn’t need that.
I remember watching videos about the Bob Baker Marionette Theater with Eric De La Cruz, videos about the Tongva community with Craig Torres, and many others. Any material I found, I would send to the animators. The animators found even more information on their own and shared it with the rest of the team. For each episode we did a lot of research and made a lot of discoveries.
Luna: I think it’s the smallest team we’ve ever worked with, which creates a very different but enjoyable team dynamic. We worked very closely together. We finished the show with eight animators and had a total of eight artists working on the assets in both Paris and Valence. Our layout supervisor was handling the episodes on his own and we had three people on lighting. Of course, we had supervisors for each of the departments, and an amazing technical team behind us pulling us through the pandemic. 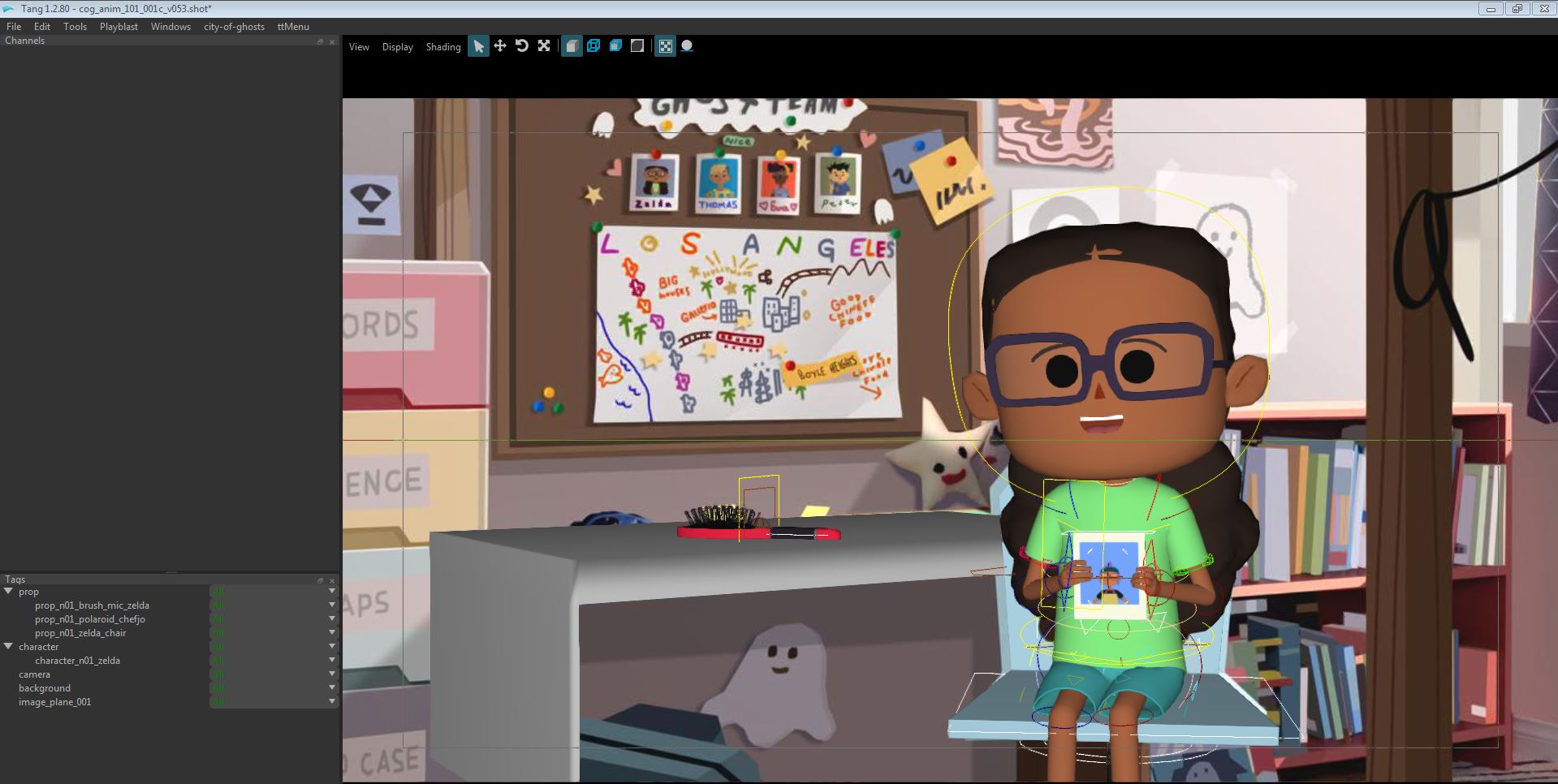 Jaimy Nikijuluw, production manager: The animation for this show is very unlike most of the tv shows we see for kids these days. It’s very subtle, and soft, but also very expressive. We had video calls with Elizabeth and Luis to be briefed about this specific style of the show. We continued these briefs until the end of production because each episode has new characters whose style needed to be established.
Luna: The voices were a huge help for setting up the timing in the animation. When listening to the characters, we could feel their emotions and the message they wanted to convey. We would also watch some real-life footage of the people on the show to understand them better and be able to take a more accurate approach to their stories.
Similarly with the ghosts: for the most part, their behavior isn’t too wild. Was this decided on from the start or through trial and error?
Hellouin: Sure, most of the team was working from home, so it required extra work for the supervisors to guide the artists and inspire them. The fact that our animators have been working in the studio for a while made it easier to handle these constraints. But like other studios in the same situation, we had to invent new ways to generate emulation in the team in this situation. The communications and production teams of the studio were really creative and made it possible.

As for the interactions between 2d images and 3d: we had a lot more shots in City of Ghosts that required these complex interactions than in the short film. For that reason, we had to develop a pre-lighting pipeline under Katana to get the proper level of flexibility for the artists and still maintain the required efficiency to deliver the expected quality on time.
Nikijuluw: We had to match the lighting in the photos, so we worked in a more vfx way (shot/shot) rather than animation (sequence/sequence). We did a first pass of lighting in layout. As the backgrounds were photos, we modeled any element that would influence the lighting and added the direction of the light for a first approval. After that, the lighting department continued to work on these scenes more precisely.
Nancy was the most active and challenging ghost. Nancy is a rock star! She’s full of energy, always dancing, drinking her daughter’s coffee — and she can even transform into other shapes in sync with her dialogue. We prepared many tests for her, and the rig was amazing, allowing us to smoothly switch from one shape to another when needed.