Jeff is amazing for animation because his delivery is so unique. He’s so charming and quirky at the same time. The animators had fun just because of the pauses he would put in sentences. It was fun for them to have a unique way of approaching the acting for his character.
At the same time, I was reading an article about schools and how much academic pressure we’re putting on kids. I know a lot of families that tried to enroll their kids in these special schools that required an audition. And I thought, we could combine these two ideas together. Wouldn’t it be fun if Tim, as a parent, could go see his daughter in school and help her with her problems? And create this really crazy school that’s run by the world’s smartest baby. We were just thinking of some really “out there” ideas. And it’s like, well, that could be interesting. I haven’t seen that before.
DS: Yes, it is your job. That doesn’t mean it’s an easy job.
TM: This movie is a broad comedy, and it celebrates the broadness of what animation can bring. We did set down some rules, like make sure we don’t have Bugs Bunny physics. Our characters can get hurt, because, as you know, in the third act, heights can be a danger. To me, it’s always best if you have some animators that love doing subtle and sincere acting, and some that like doing the broad stuff. So, it’s finding that balancing act. I don’t rely so much on boards because I know what animation can bring with animators as actors. I always talk to the animators like they’re actors to help them understand who the characters are. It’s important to let the animators own a chunk of a scene or own a character.
Tom McGrath: Well, that’s the joy of animation… seeing it from concept to screen. The studio announced they wanted to do a sequel after the first film came out, and I was pretty burnt. I was like, “Well, what would that story be?” They already had a TV show going [The Boss Baby: Back in Business]. So, it took me around six months; I got together with Michael McCullers and started brainstorming. We thought, well, since the TV series continues the story of them as kids, it might be interesting if we could tell the story of them as adults. The “B” part of any family is when you grow up and grow apart, that sort of thing. And since we had set up the formula in the first film that turned the villain back into a baby, it’s like, “Oh, if we had this formula and you could go back to being a kid with what you know now, that might be a really fun concept to play with.”
DS: So how do you keep all these various elements in your head, across all aspects of the story and the look, so at any one moment, you can have that conversation and provide what’s needed for the artists to do their job? That can’t be easy.

DS: The film is filled with action from start to finish. The energy within the animation is almost frenetic, it’s so wildly cartoony and imaginative. What kinds of directives did you give the animation and layout teams? How much of what we experience is from the boards, versus what the artists dreamt up as they produced the film? How much of the look came from original designs rather than the natural evolution of the production?
So, we kind of rolled with that. But from the outline, working with Michael on the script, then going off to write the screenplay, the structure of the story didn’t really change that much. It was really the process of making it the best version of that, you know, the best scenes, the best versions of those scenes. There was never any “stop and rethink the story.” We just kind of kept plowing forward. And then, the movie really took off when we cast the entire picture, with Jeff Goldblum, James Marsden, Ariana Greenblatt, and Amy Sedaris.
TM: Well, that’s why you have to love it! You have to love the project you’re working on. Not only are you going to be living with it for three years, but you’re the voice of the film. You’re the voice of the characters. So, you obsess about it. But that’s because you love it.
DS: Since you brought it up, I’ll ask you here, was there ever any other casting choice besides Jeff Goldblum for Dr. Armstrong?
TM: No. When you think, “Who should play the world’s smartest baby?” it’s Jeff Goldblum. And fortunately, he wanted to do it. He came to the studio, and I pitched him the story even though it was still early on when we were still working on the script. And he really liked the idea. On the fly, since we didn’t have the full story, I just kind of threw out like, “Hey, at the end, wouldn’t it be great if he learned his lesson through the other characters and went back to his parents?” and he just loved that idea.

TM: No, it’s not. But that’s the job. You’ve got to keep it all in your head. And remember, we start scenes out of order too. It gets a little tricky.  Every scene has a mini arc for the characters. And you kind of juggle them. The first movie was literally Tim’s point of view throughout the entire story. This film has four points of view. Tina, Tabitha, Tim, and The Boss, which is a bit more freeing as a filmmaker because you can cut around. For me, I always played the movie in my head after the day was done. That’s the job.
And that’s particularly true with Armstrong, because the best villains are the heroes of their own story, and they should be acting that way. What Armstrong thought he was doing was to the benefit of humanity. You never do the mustache twirling because the character would never do that. If I’m working with animators, I like getting in a room with them, so we can work on how to make the scene better. What could be funnier, or how could we make a gag play better? But the hardest part of my job is knowing the story and helping the animators understand the arc of the whole movie. So, we have more of a conversation than me giving directives.

And sometimes you find things along the way. Sometimes, something that worked well in one scene gives us a great idea for a later scene. So, you rewrite it. Take how Mentos candies are the things that undermine the villain. It started as an idea where Armstrong defies his parents by eating whatever he wants, and he loves candy. And then we brainstormed with the story artists, and they were like, “Hey, maybe we could use a Mentos volcano to be his Achilles heel.” And I thought, “Oh yeah, that would work great at the end. Now we just have to plan for it at the beginning.” You’re always cross-referencing certain points in your movie as you work to keep it all fresh in your head. You’re always thinking of how do these things set up? How do they play out and then how do they pay off? It’s a lot to consider.
Working with the actors is the equivalent of working with animators. You don’t tell them what to do as much as inspire them to understand what the acting would be. So, you use verbs. It’s the way I’d work with Alec [Baldwin]. You don’t say, “He’d say this more angry or more mean.” You don’t use those words like that. You’d say, “He’s trying to reprimand them,” or “He’s trying to embrace them.” You use verbs that help the actor understand what the objective is of the character. So, for me, the lesson in working with actors is that you use the same vernacular you use with animators. It’s freeing for them because they’re not just following a storyboard. They’re actually getting into the head of the character.
McGrath’s films have generated a combined .7 billion globally for the studio. In addition to co-writing his new film with Michael McCullers, he wrote Madagascar and Madagascar: Escape 2 Africa. He also had a hand in writing and developing All Hail King Julien: Exiled and The Penguins of Madagascar, TV series derived from his Madagascar films. He recently spoke to AWN about the latest entry in The Boss Baby franchise, sharing insights on how he directs animators similarly to how he directs actors, and how a key part of his job really is all about inspiring artists to make the film’s characters and scenes their own.

When baby Tina reveals that she’s – ta-da! – a top secret agent for Baby Corp on a mission to uncover the dark secrets behind Tabitha’s school and its mysterious founder, Dr. Erwin Armstrong (Jeff Goldblum), the Templeton brothers reunite in unexpected ways, leading them to re-evaluate the meaning of family and discover what truly matters.

Dan Sarto: The sequel was announced almost immediately after The Boss Baby hit theaters. The new film is set 40 years after the events of the first film. How did the story come about and how long did it take to nail it to your liking?
The sequel to 2017’s blockbuster hit, The Boss Baby, which McGrath also directed, The Boss Baby: Family Business reunites the Templeton brothers – Tim (James Marsden, X-Men franchise) and his Boss Baby little bro Ted (Alec Baldwin) – 40 years after the events of the first film. Now adults, they’ve drifted away from each other: Tim is now a married stay-at-home dad, while Ted is a hedge fund CEO. Tim and his wife, Carol (Eva Longoria), the breadwinner of the family, live in the suburbs with their super-smart seven-year-old daughter Tabitha (Ariana Greenblatt, Avengers: Infinity War), and adorable new infant Tina (Amy Sedaris, Netflix’s BoJack Horseman). Tabitha, who’s at the top her class at the prestigious Acorn Center for Advanced Childhood, idolizes her uncle Ted and wants to become like him, but Tim, still in touch with his overactive youthful imagination, worries that she’s working too hard and is missing out on a normal childhood.
Dan Sarto is Publisher and Editor-in-Chief of Animation World Network.

While known to many of you as the authoritative voice of Skipper, lead penguin in the hilarious Penguins of Madagascar franchise, Tom McGrath is also DreamWorks Animation’s most prolific film director. His sixth feature, The Boss Baby: Family Business, the studio’s latest animated family comedy adventure, just launched this past Friday, both in theaters and on the Peacock streaming platform. 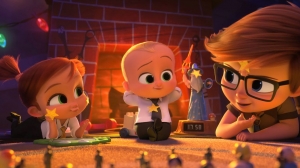