The other creatures in the reptile house, a thorny devil lizard named Zoe (Miranda Tapsell), Nigel the scorpion (Angus Imrie), Jackie the giant crocodile (Jacki Weaver), and Frank (Guy Pearce), a funnel-web spider, do their best to raise Maddie’s spirits but circumstances seem bleak when Jackie is taken away for aggressive behavior after simply trying to save a child from drowning in her exhibit. So, Maddie, Zoe, Nigel and Frank decide to escape the zoo and head back to the outback, accidentally bringing along a cute and fuzzy koala named Pretty Boy (Tim Minchin) whose personality is not so cute and fuzzy.
“Particularly a taipan snake,” says Harry Cripps, an Australian native and co-director on Netflix’s upcoming 3D/CG-animated comedy, Back to the Outback. “They are incredibly shy, even though they have the deadliest venom on the planet. There is not one recorded death from a taipan snake in Australia, because they are so shy, and they’re so gentle, and yet, people are terrified of them. That’s what drew me to this idea of actually giving a voice and personality and feelings to these animals who are often demonized.”

“Harry’s been known as a writer and I as an editor, and the perception is there of, ‘Will they be able to direct?’” says Knight. “Netflix saw that we could do it and trusted us. And it was really very emotional for me to be able to go through this movie as Maddie’s champion in a way, following along with her on this journey as she blossomed in a very similar way to myself.”
Victoria Davis is a full-time, freelance journalist and part-time Otaku with an affinity for all things anime. She’s reported on numerous stories from activist news to entertainment. Find more about her work at victoriadavisdepiction.com.
Creating accurate but appealing characters was a challenge in the beginning, requiring an intense amount of research by the team. Their ultimate goal was to use animation to make these characters interesting, despite the facts about their frightening abilities. 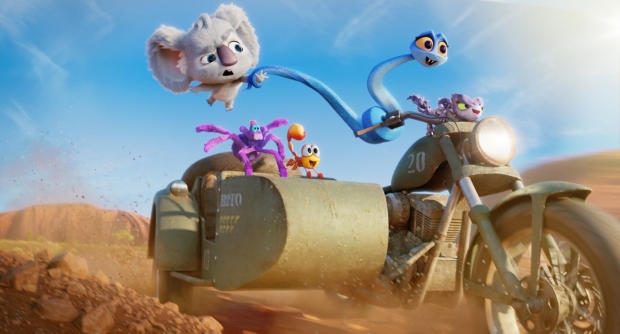 “I think they relate to it more than seeing another human do it,” he says. “Naturally, we project a lot of human emotions onto animals. We say things like ‘cunning as a fox.’ There’s a lot of expressions we have that actually involve animals. We see them, in many ways, as bigger expressions of our own emotions. And so therefore, when we see them in animated movies, where they’re even larger than their animal forms, it is a very simple way, particularly for children, to latch onto a concept, to understand emotion and to understand struggling with some anxieties and fears.”
“Particularly within the expression, the eyes, and especially the voices of the actors, we wanted to capture the humanity of these little creatures,” says Cripps. “So we see them as creepy crawlers, but we understand that they have these great big hearts and that they are these little creatures who yearn and love and just want to be free like the rest of us.”
Back to the Outback, co-directed by Cripps and Kung Fu Panda editor Clare Knight, releases on Netflix today, December 10. Produced by Reel FX Creative Studios and Weed Road Pictures, the story features a kind-hearted taipan snake named Maddie (Isla Fisher) who is excited to make her zoo debut as Chaz (Eric Bana), a park ranger, gets her ready for one of his “educational” presentations to visitors. But instead of showing off Maddie’s sweet personality, Chaz exploits the snake’s poisonous potential for show, frightening guests and shaming the gentle serpent.
Cripps adds, “I think it was leaning into the physical characteristics of a lot of the animals to help inform some of the personalities. As Claire said, with spiders, they do have these extraordinary mating dances and then there’s the buck teeth. Frank is one of the favorite animals in this movie because we always thought of him as a rather awkward teenage boy, who feels like he can’t quite control his own body. And then he has these buck teeth. So it was using what nature had given these creepy crawlers to help inform the personalities.”
It may seem like an extreme assortment, but for Cripps, these animals were part of his every day growing up. “I grew up in Sydney, so at the beaches there were sharks and jellyfish and poisonous octopi, and then in the Blue Mountains, there were snakes and spiders,” says the director. “And with this film being on Netflix, it reaches such a broad audience and they really let us run with this idea. They didn’t interfere. They gave us great notes, but they said, ‘This is Claire’s and your project, and you go ahead and do it the way you want to do it.’”
What do a taipan snake, thorny devil lizard, scorpion, and funnel-web spider all have in common other than their status as some of the deadliest creatures in Australia? They’re all highly misunderstood.&nbsp;
In animation, the themes of self-love and self-discovery are nothing new. The medium is often used to unpack these sometimes-complex ideas for a younger audience. But Knight and Cripps are taking a fresh approach, not only with their assortment of less majestic characters, but also taking a new angle on the topic of acceptance.
Having worked on all three Kung Fu Panda films, as well as Madagascar and Spirit: Stallion of the Cimarron, Knight is also no stranger to the popularity of animation using animal characters as the channel for communicating these kinds of themes.

Knight adds, “And it feels like there are so many levels of messages in there, whether it’s about celebrity or judging a book by its cover, and then wrapping all of that up with these extraordinary animals that I don’t feel often get represented in animated features.”
“It was a story that was brought to me first by Greg Lessans, one of our producers,” explains Cripps. “He took his children to the butterfly exhibition at the Natural History Museum and his kids just wanted to run out and go to see the spiders and he came to us and said, ‘Wouldn’t it be cool to make a film where the poisonous and deadly animals are the heroes?’ When he talked to me about it, I loved it because Australia has some of the most extreme examples of cute and cuddly animals like koalas, but also the top deadliest things in the world that can kill you.”

“I’m very excited to share the fun and the joy of this movie with the world,” says Cripps. “And I’m really proud to be able to show Australia, the places and the animals of Australia, to every other kid in every other country around the globe.”
“In Kung Fu Panda, I found that part where Oogway leaves in petals was a very comforting way of understanding that someone leaves, or dies,” she says. “I think there’s ways that you can thread messages through animation and these animals that help families and children to discuss things openly.”
And as Back to the Outback’s premieres, Cripps says he becomes more and more excited about sharing this love letter to Australia and its wildlife with 190 countries.
“There are some very similar themes that run throughout these movies, in particular tolerance about accepting people for who they are on the inside and not judging them by the way they look,” Cripps shares. “But one of the big things we wanted to really lean into was that tolerance is a two-way street. If you want to be seen for who you really are, you must take the time to see others for who they really are.”
This being both Knight and Cripps’ directorial debuts, as well as one of the first animations Cripps has worked on, both felt strong kinships with Back to the Outback’s characters as well, entering into new territory and having the confidence to believe in themselves as they led the way on this project.
For Knight and Cripps, the more they learned about these creepy crawlies, the more organically their endearing forms began to take shape.
The film takes viewers on a hilarious and hair-raising journey throughout the wild and captivating land of Australia, following these unique characters as they meet other dangerous species of the outback, from great white sharks to Tasmanian devils, along with nature’s less appealing critters such as cane toads and dung beetles.
And Cripps believes this stems from viewers often having an easier time learning from animal characters than human ones.
“It wasn’t just a bunch of creepy animals on the run,” he says. “It was a bunch of creepy animals, with a beautiful koala. We specifically wanted that relationship between Pretty Boy and Maddie to really drive that home. It’s not about Maddie just being a victim and going, ‘No one sees me for who I am.’ It was her also having to learn that she had preconceptions about Pretty Boy that she had to get rid of, the same that he does about her. And it was that sort of relationship between a beautiful koala and a deadly snake that we thought was quite different to a lot of the other films out there that were dealing with empowerment topics.”
He adds, “To have the opportunity to tell a story about the animals that are not only from the country I’m from, but that actually I grew up with has just been such a wonderful honor and a unique opportunity. It’s also a little bit daunting because if I get it wrong, I’ll be vilified back in Australia.”
This, Cripps says, is where Pretty Boy’s role in the film really shines outside of just comedic entertainment.

“When we first started, we had every kind of image of these characters up on these boards in our office, and we were researching all their different traits,” explains Knight. “Spiders, for example, have this mating dance that they do. And hairy funnel-web spiders have this strange thing going on that can look like buck teeth. So that’s how we interpreted them.” 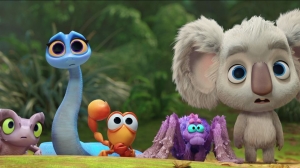