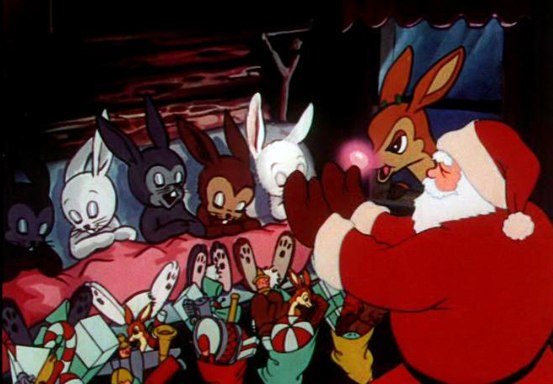 The only Oscar winner on this list is Richard Williams’s A Christmas Carol, a visual tour de force featuring animation by the great Ken Harris. Not even Michael Caine in a world of Muppets can top this as an adaptation of the Dickens novella. It isn’t Williams’s only festive work: he also directed the Emmy-winning 1982 short Ziggy’s Gift, featuring the character from the long-running comic strip Ziggy.
If you have a suggestion of your own, or dispute that any of the above are “overlooked,” let us know in a comment below. After all, what’s Christmas without a little debate about what to watch?
Let’s start with Rudolph. We know the hoary 1964 stop-motion special from Rankin/Bass, but the reindeer has had other outings in animation, starting with Max Fleischer’s short Rudolph the Red-Nosed Reindeer, which came out in 1948 — before the song. Those looking to get their reindeer fix while steering clear of Rudolph might try the Drew Barrymore-produced Olive, the Other Reindeer (1999), which multiple readers mentioned.

There were several votes for A Wish for Wings that Work (1991), a tv special from Spielberg’s Amblin Television and Universal based on the children’s book by Berkeley Breathed (who wrote the screenplay). The film, which tells the tale of a penguin with a yearning to fly, is clearly more popular with readers than with Breathed himself, who told a reporter it belonged “in the rubbish pail.”
With this in mind, we launched a Facebook poll asking readers for their favorite overlooked Christmas-themed animation — basically, anything the networks don’t air multiple times each year. Respondents picked everything from anime features to vintage Hollywood shorts; we’ve spotlighted a few popular choices below. Whether sincere or satirical, kid-friendly or decidedly not, these titles deserve some of your time over the holidayw.

Unsurprisingly, many plumped for holiday specials from familiar shows, ranging from He-Man to Berenstain Bears, Hey Arnold to Arthur. (That last one shouldn’t be confused with Arthur Christmas, the 2011 cg feature from Aardman.) One respondent cited Disney Channel’s Elena of Avalor, which has multiple Christmas episodes — and one Hanukkah one.
Max Fleischer — this time working with his brother Dave — got another nod for the short Christmas Comes But Once a Year (1936), which the pair produced at Fleischer Studios. Like many of the studio’s films, it is part of the public domain, free to all — what’s more Christmassy than that?

Conversely, viewers hungry for the cozy Rankin/Bass aesthetic but sick of the reindeer could watch The Life and Adventures of Santa Claus (1985), based on a story by L. Frank Baum. “It’s their best of the bunch but for some reason hardly anyone has seen it,” lamented one respondent.
There’s such thing as too much familiarity, even at Christmas. A Charlie Brown Christmas, Rudolph the Red-Nosed Reindeer, and How the Grinch Stole Christmas! are fine films — they wouldn’t have become seasonal network staples otherwise — but they tend to hog the limelight, obscuring other Yuletide animation that’s been produced over the decades. And hogging isn’t in the Christmas spirit.
I’ll add my own selection: The Snowman (1982), the adaptation of Raymond Briggs’s picture book directed by Dianne Jackson. In the U.K., where I grew up and live, it is a staple of holiday tv programming, and its song “Walking in the Air” is so familiar that we’ve grown desensitized to its haunting beauty. I’m told this isn’t the case in the U.S., so I’ve put it here for good measure.
One of the most popular picks was Satoshi Kon’s classic anime feature Tokyo Godfathers (2003), a bittersweet dramedy that follows the fortunes of three homeless people on the city’s streets. If you want to learn how to sing “Silent Night” in Japanese, this is the film for you.
Another 21st-century addition to the Christmas canon is Klaus (2019), Sergio Pablos’s droll origin story for Santa. The Netflix film earned warm reviews and an Oscar nomination, yet one respondent was still moved to write, “It doesn’t get enough love.”
Images at top, left to right: “A Wish for Wings that Work,” “Tokyo Godfathers,” “Olive, the Other Reindeer”