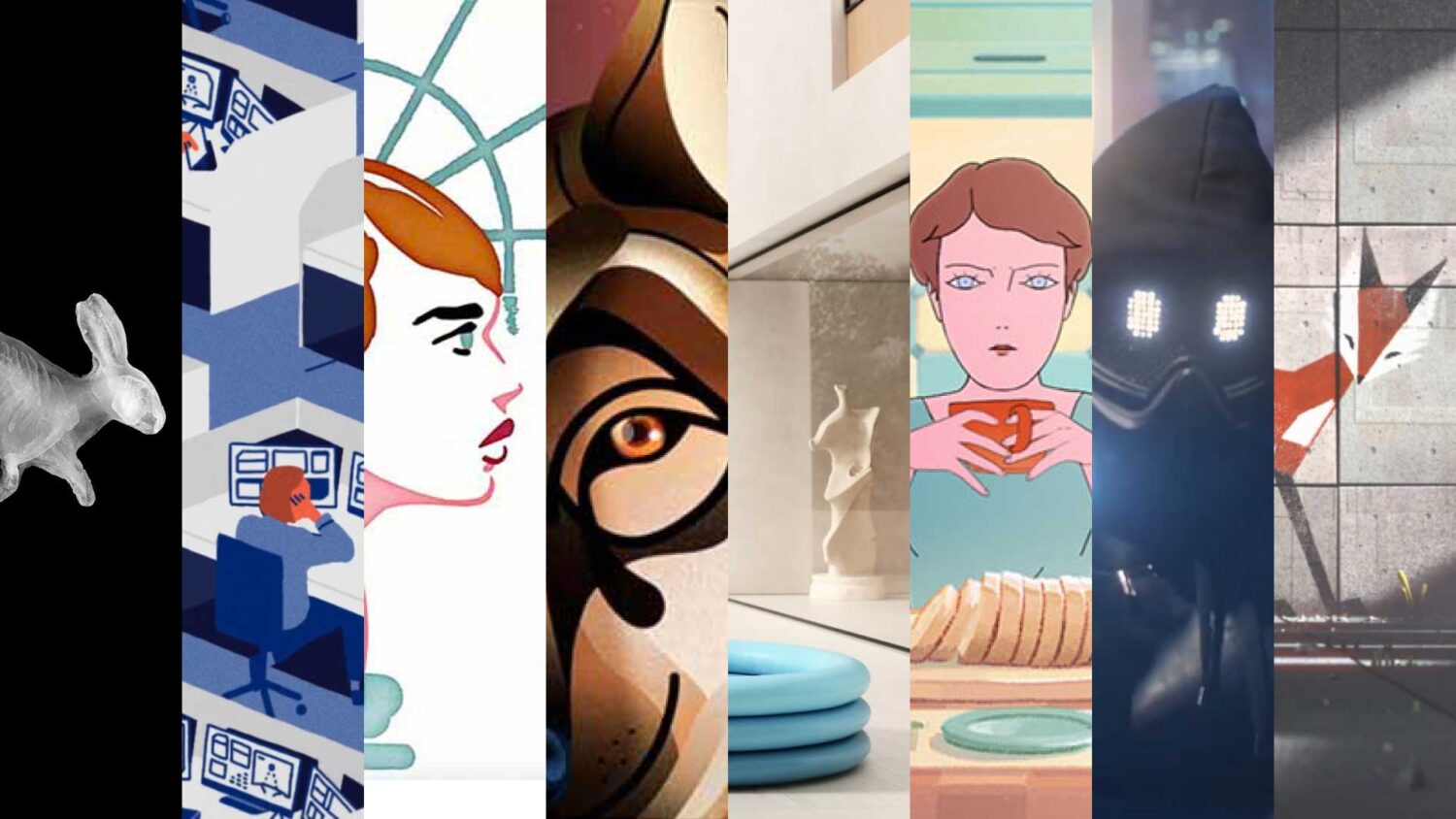 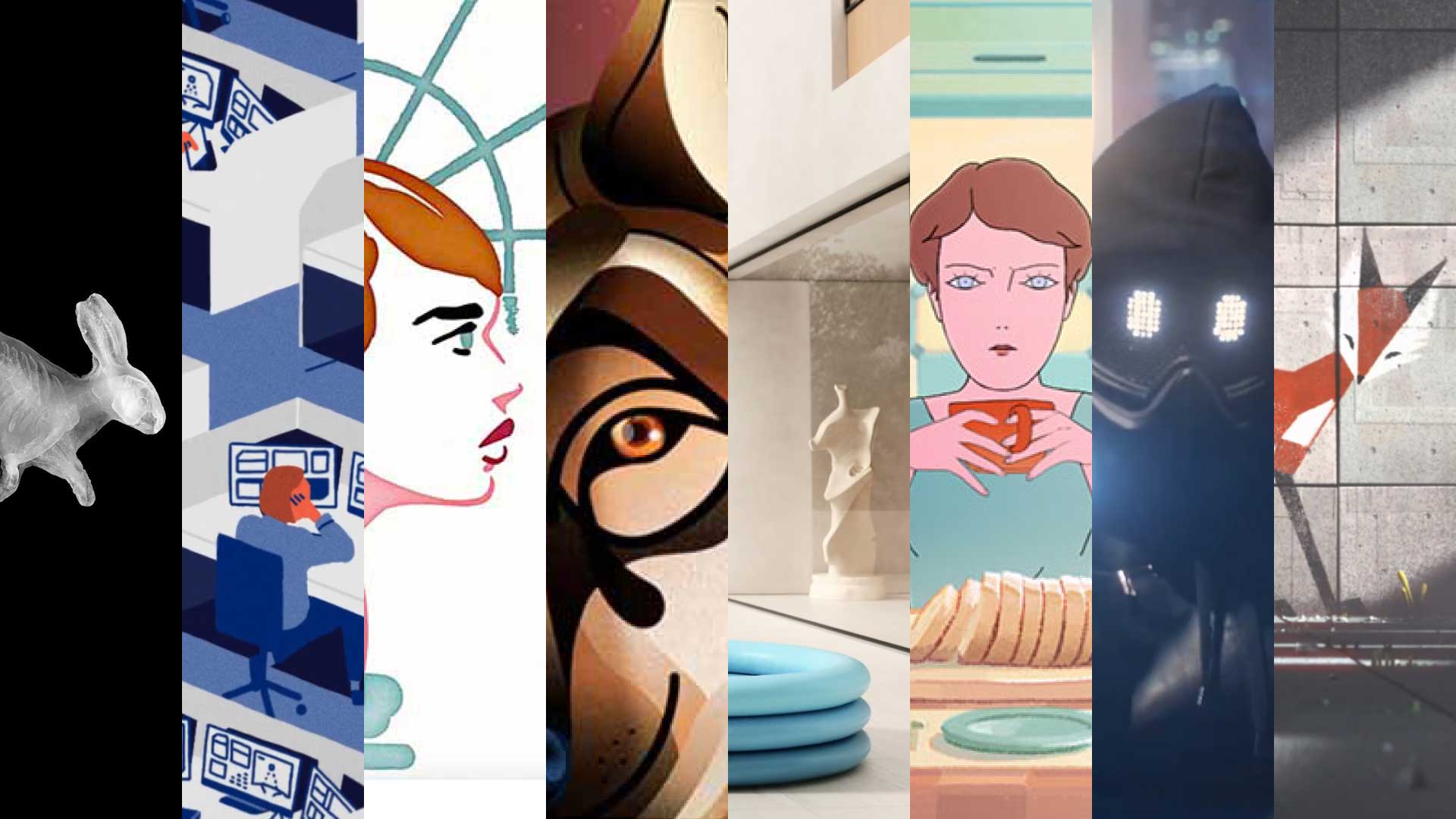 Co-director Claire Sun at Gobelins in Paris: “This is our graduation movie made in our last year of studying conception and direction of animated filmmaking at the Gobelins School in Paris.

Ezequiel Pini and Sebastian Baptista at Six N. Five in Barcelona: “An empty, immaculate high-end residence. Every design object and piece of furniture occupies a specific, calculated space.
Aira Joana and Luca Struchen, directors in at HSLU in Lucerne, Switzerland: “CONCRETE was our diploma film, so we had (almost) total freedom to create what we wanted – the only condition was that it needs to be no longer than 10 minutes.
“We were intrigued by the metaphor of a human, living his life mirroring the life of a satellite, even sharing its fate of gloriously bursting into flames in the end.”

Clément Soulmagnon, director at Eddy in Paris: “For many years I have wanted to transpose my illustration style into 2D animation. The challenge for our team was to create a watercolor render that didn’t vibrate too much but which didn’t look too digital either.
Removing client briefs and budget concerns from the creative equation can result in paralyzing indecision or, in the case of these eight short films, it can spark a confident quest for narrative and visual innovation.
Nominated for a 2021 VES Student Award, Time’s Down by five recent graduates from French digital arts school ArtFX mixes blazing action, snarky dialogue, and seamless execution into a fabulous cyberpunk romp. “But there are other objects that escape that standard, that are of a different kind. These are the ones who break into the aseptic landscape and take it by storm. A blow worthy of a class struggle, where a useful minority rebels and sets out to tear down its symbols.”

Director/designer/animator Jerry van de Beek at Little Fluffy Clouds: “The fires that took hold in Yellowstone were huge and complex. There were so many elements involved, affecting both animals and people and the very nature of the land.
[embedded content]
[embedded content] [embedded content]
“I wanted to create something simple, light, with lots of white that leaves a space for the viewer’s imagination and interpretation, for their dreams and fantasies.”

“TIME’S DOWN”
STASH 147
“Our goal was to build a visual world with a dense atmosphere, which would act as a blank canvas in the viewer’s imagination, without losing any narrative impact.”


YELLOWSTONE 88 “SONG OF FIRE”
STASH 148
Posted on Saturday, December 25, 2021 · Leave a Comment
Brussels-based animator Soetkin Verstegen calls her attempt to use ice for a stop-motion film “the most absurd technique since the invention of the moving image.”
“Through an elaborate process of duplicating the same image over and over again, it creates the illusion of stillness.”


“The school left us creative freedom over the subjects of our movie and we quickly decided we wanted to talk about mental illness and mental health. We thought animation would be the perfect medium to talk about this subject, as mental struggles are invisible.”
All films were published in The Stash Permanent Collection during 2021 and are listed here in chronological order by the date of publication.

(above)
“FREEZE FRAME”
STASH 145
“CONCRETE”
STASH 148
“THE REVOLT”
STASH 147 Directors Frederic Siegel and Benjamin Morard at Team Tumult in Zurich: “The first visual ideas for the film were the two images of a satellite in space, burning up in a huge fireball and a man walking through a bar, burning up in the same way.
[embedded content]
“The narrative poem, penned by my partner Betsy De Fries, combined with the way it is read by the actor Peter Coyote, has a very unique rhythm. For us, the most challenging thing was which part of the story to tell and what feeling we wanted to capture and communicate.”