AWN: Did that lead to any significant production challenges you might not have faced if you had utilized a more traditional CG production pipeline?
PP: It was something that I’d been wanting to explore for a long time and never had the chance to do because I was never in this position. It’s influenced a lot by my own education in visual arts growing up in France, as well as the French graphic novel scene and French animation, especially smaller independent films. Oftentimes those are 2D movies.

PP: It’s incredibly organic for the performers just to be together. I mean, that’s what they do on live-action sets. And the idea was to try to allow for a greater flow in the sequences and in the way they act out their characters. We couldn’t actually assemble the whole cast – it was mostly duos and trios. It’s not done often, as you know, because it’s very complex for the editorial team to separate those takes. But we wanted to do that from the beginning, and COVID was our saving grace here. With everybody in their own separate rooms, it was easy to have virtual recording sessions where they could interact and overlap.

RH: Actually, it was liberating that we weren’t trying to strive for anything in particular, that Pierre had an idea where he wanted to go, and it was a path of exploration and figuring it out together.
France is also at the convergence of so many influences – not just European culture, but also anime and manga culture big time. It’s that melting pot that I grew up with. And so you’ll find some Miyazaki and some Cowboy Bebop, as well as Akira Toriyama, the creator of Dragon Ball. And definitely some influences from American animation, which I always loved. So all of that comes together to give the movie its own stylized look that you haven’t really seen before. 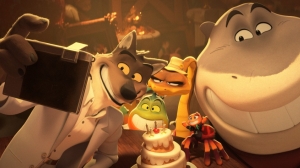