The five-day, online program allows Native American writers, filmmakers, and artists to work on their current animation projects in one-on-one mentoring sessions, group sessions, and peer workshops, and to hear from working animation personnel.  The week concludes with an intensive pitching session for each participant, where a panel of creative executives will provide feedback and guidance. 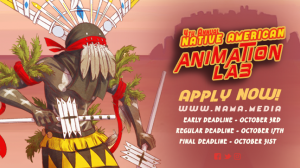