Sidebar
Browse
Peter Debruge takes issue with the film’s visuals in his Variety review, regretting Dreamworks’ decision to outsource the animation:
In the Los Angeles Times, Katie Walsh celebrates the abundance of female talent behind the film, before adding:
In Spirit Untamed, screenwriters Aury Wallington and Kristin Hahn condense the long-running series into what essentially functions as an introduction to a show that has eight seasons under its belt already. It’s a strange next step for the oddly enduring franchise, if only because the audience members that will likely be most taken with Spirit Untamed have probably already consumed much of Spirit Riding Free.
[embedded content]

The film reminds Forbes’s Scott Mendelson of Dreamworks’ early days, before it doubled down on “frantic, pop culture-infused” comedies like Shrek:
This may be the most striking thing about Spirit Untamed: reviews have noted its lack of originality in the visual and narrative departments. Many point out that the film remixes story elements from the opening episodes of the popular Netflix series on which it’s based, Spirit Riding Free. (Spirit Untamed mostly takes its cues from the show, not 2002’s 2d feature Spirit: Stallion of the Cimarron, which launched the franchise.)

One can’t help but feel that the gender representation behind the camera is an integral part to the authentic sense of girls’ empowerment espoused by the film, the story of a young girl and her unique connection to a wild mustang, Spirit. What’s also striking about Spirit Untamed is that the story is grounded within a (somewhat) realistic, recognizable world, in the 19th century American Southwest … It’s somewhat refreshing to see an animated film tell what is essentially a formulaic hero’s journey story without relying on the extraordinary.

Lovia Gyarkye looks at representation in Spirit Untamed from another angle, and finds the film wanting, as she writes in The Hollywood Reporter:

Spirit Untamed is directed by Elaine Bogan (Trollhunters: Tales of Arcadia, 3 Below: Tales of Arcadia, Dragons: Race to the Edge) and co-directed by Ennio Torresan (head of story, The Boss Baby). The screenplay is by Aury Wallington and Kristin Hahn. As with its 2017 feature Captain Underpants: The First Epic Movie, Dreamworks outsourced the animation to a lower-cost studio — in this case, London’s Jellyfish Pictures. The film is released by Universal.

Spirit Untamed takes place in a universe unbound by time or geography, and that lack of specificity is frustrating for a film whose original premise was rooted in the violence endured by indigenous people and the surrounding wildlife at the hands of white Europeans. In fact, native people are essentially erased from this iteration of the story.

Spirit Untamed, the latest equine drama in Dreamworks’s Wild West franchise, comes out exclusively in theatres tomorrow — one of the only big-studio animated feature to do so in the pandemic so far.

At the time of writing, the film’s critic score on Rotten Tomatoes is 40%. Here’s what the reviewers are saying:

Spirit Untamed is a reminder of a time when animated films were strictly aimed at kids because adults were expected to see “grown-up films” in theaters. It’s also a relic of a brief moment when Dreamworks Animation tried to make its name via big-budget and visually dynamic animated features that were just a little edgier and slightly more mature than the stereotypical Disney fare. The commercial failures of [Spirit: Stallion of the Cimarron], Sinbad, and Flushed Away contrasted with the monster successes of Shrek, Madagascar, and Kung Fu Panda, making Dreamworks an accidental victim of its own success.

[The Spirit Riding Free series] covered its bargain-price tracks with textures that appeared almost painterly by comparison, like something out of a picture book. This new feature substitutes unappealingly designed, obviously digital characters, who’ve been badly rigged and stuck in under-detailed environments. Early on, while chasing a squirrel through a banquet hall, Lucky falls and disrupts the entire event, but the payoff shot cuts to a table with a few items knocked over, presumably because more props would’ve been too costly or cumbersome to animate.

Awarding the film a C+ grade in Indiewire, Kate Erbland questions the film’s decision to hew closely to the series: 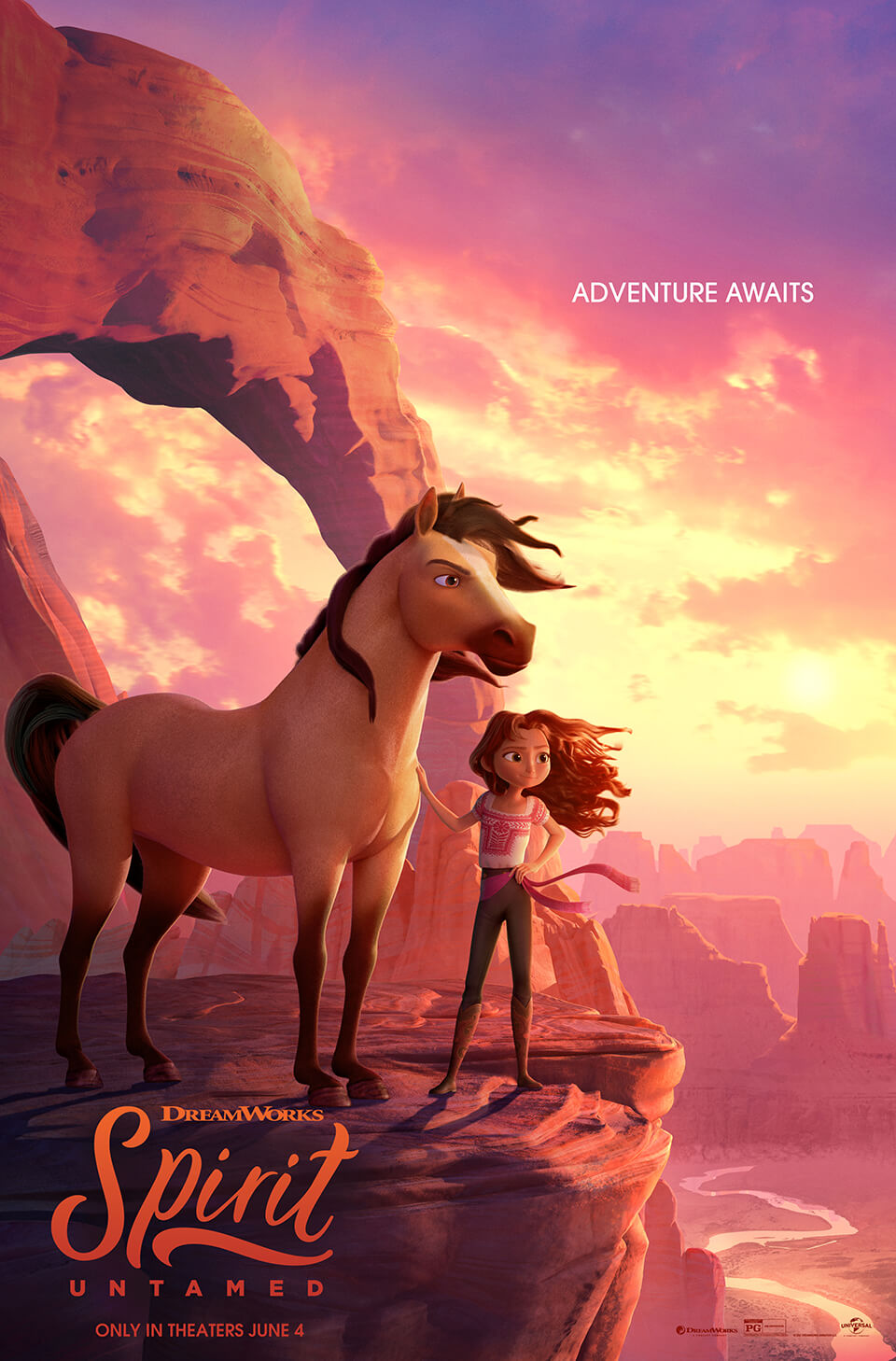