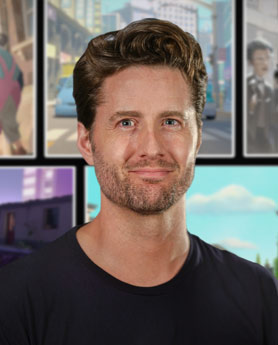 Listen to Appelhans discuss these subjects, and many others besides, in the podcast above.

The cg family film, a Shanghai-set story about a boy who encounters a magical dragon, was made in an unusual way, as a Chinese-American co-production involving Sony Pictures Animation and Xiamen’s Base Animation. In a wide-ranging conversation, Appelhans explains why he ended up making the feature in China, rather than through the U.S. studio system, and reflects on what it means to be an American telling a story rooted in Chinese culture.
Welcome to the latest episode of the Cartoon Brew Podcast, guest-hosted by Cole Delaney of Youtube channel Any-mation. Today, Cole speaks to Chris Appelhans, director of Sony Pictures Animation’s new feature Wish Dragon, which is being distributed by Netflix.

The director is frank about the relative upsides of this set-up, but also the downsides, not least the relatively small budget. He talks about the specific challenges of bringing to life the dragon Long — a mix of Aladdin’s Genie and Marvel’s Tony Stark — and rigging and animating him within the constraints of the production.
CategoriesMovie Animation