Among other things, the salary disclosures underscore the big pay disparities between different regions and nations, with L.A. artists generally paid much more than others (although these variations reflect local cost of living to some extent). Here are some examples of pay in other countries:
At the upper end of the scale, some experienced artists are making well into six figures:
Salty Animators has rounded up posts in an Instagram Story (click on the Highlight titled “Payrates” on the account). They make for interesting reading, not least because many contributors also give their job title, location, experience, gender, and industry (gaming, vfx, or animation).

Meanwhile, others are earning three or four times less, with one junior 3d digital matte painter at Technicolor-owned MPC Episodic being paid as little as 26K a year (note: the currency was unspecified for this entry and it’s unclear whether it’s the Canadian dollar or the British pound, though in either case, it’s still too low):

This kind of detailed information on salaries across the industry is hard to come by, although it is becoming more common for artists to share numbers on social media. Doing so can help them figure out how much they are worth. As Salty Animators concludes: 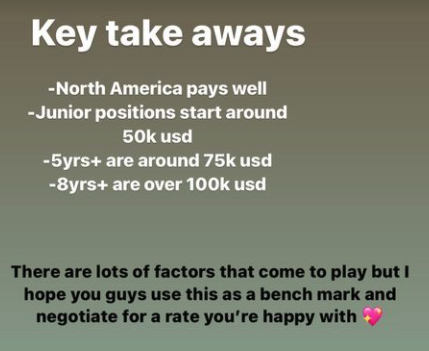