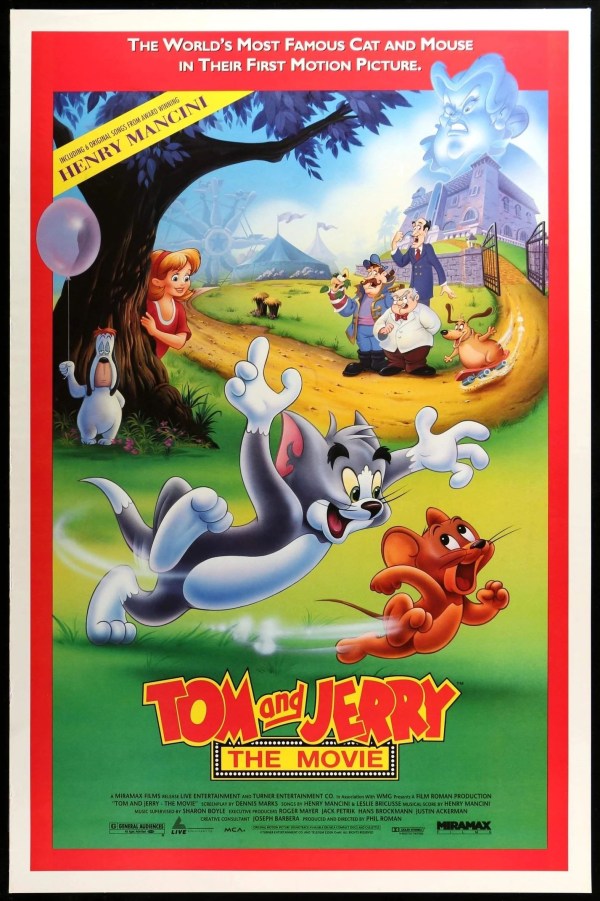 The animation is OK. That’s about all I can say. The crew clearly aimed for the energy of the original shorts and succeeded for the most part. It’s just that overall quality is clearly second tier but on par for most other animated films that weren’t Disney’s.

The story is, what I would consider, pedestrian and aiming towards the formulaic. Tom & Jerry, it was clearly felt, could only carry a film by themselves for so long and thus, Robyn enters the scene and provides the necessary problem the characters need to solve. Orphans must have been trendy in the late 80s and early 90s as films such as Aladdin, and All Dogs go to Heaven attest to.
The producers got around this by simply having the characters talk. Now in fairness, they had a lot less dialogue than I remembered and to the producer’s credit, it is a restrained amount all things being considered. Any dialogue however, was going to break a fundamental feature of the original shorts who’s genius was that they dispensed with all dialogue aside from Tom’s occasional yells. So one wonders if that sinks the ship before it’s even left the shipyard and to a certain extent it does.

Tom & Jerry were, of course, born on the big screen. Appearing in a raft of shorts for Metro-Goldwyn-Meyer (MGM) in the nineteen forties and fifties. That life in shorts was shared with their Hollywood colleagues who similarly didn’t receive their feature debut for many decades after short films had vanished from cinemas. The timing of this film comes a short time after the release of Who Framed Roger Rabbit! and rode a wave of nostalgia for cartoons from the Golden Era.
A new Tom & Jerry live-action/CGI hybrid movie is on the way, but the duo’s initial outing on the silver screen in a feature makes for amusing viewing after almost 30 years.
I remember seeing it in the cinema at the time and thinking it was a pretty good film. Not a favourite, but enjoyable. Watching it almost thirty years later is an altogether different experience. Not only am I older, but animated filmmaking has changed almost beyond recognition. The film now seems like an curious oddity from a different time.
That being said, it’s necessary to consider everything in context. This film was released in 1992/3 when animated films were stuck in a rut of sorts. Disney’s renaissance was well under way, but the reasons were not yet so obviously unique to that company. Independent animated features instead copied one of the more noticeable traits by going the musical route. T&J:TM exemplifies this. The songs are not ‘out of place’ per se; they’re just another aspect of the film that yanks the characters further away from their origins.
With the release of a new film that combines live-action with CGI as a way of bypassing the dialogue dilemma, comparing both films will make for good discussion.
Both William Hanna and Joe Barbera were alive when this film was released with the former being a creative consultant. To the filmmakers credit, the degree of loyalty to the original shorts while trying something new is admirable. Later results aren’t as good. A new, live-action/CGI hybrid is on the way, but the duo’s initial outing on the silver screen in a feature makes for amusing viewing after almost 30 years. The odd gag is reused outright, but it’s the ethos that carries through and evolved. The film makes good use of incorporating scenes reminiscent of the shorts into the wider story without making them feel like set pieces.
I don’t hate this film. I don’t love it either, but therein lies the quandary. T&J:TM is stuck between a rock and a hard place. It valiantly tries to take characters who’d never been on screen for more than 8 minutes and make them survive for more than 90. It breaks one of the cardinal rules of said characters not out of choice, but out of necessity. It came out too soon to be able to take a risk, but ended up being too generic to stand out.
In the end, what brings the film down is that it was released perhaps half a decade too soon. In hindsight, Toy Story was groundbreaking for far more than its CGI. Conceptually it broke the mold for what animated films should be with its writing, humour, and most importantly, its lack of songs. T&J:TM follows the old mold and it shows. Had the film been released in 1997, we would have seen a different film; perhaps in a good way, perhaps in a bad way. Optimistically, I hope it would have been better and benefited from knowing that Disney’s success was down to more unique factors and that Toy Story showed there was a different path to take.

Tom & Jerry: The Movie (T&J:TM) faces an uphill battle based on the concept alone. Taking characters beloved for their adventures in short films and stretching them to the amount of time that’s expected of a feature is, well, difficult. Roger Rabbit sidestepped the issue through original lead characters and cameos for everyone else. Tom & Jerry wouldn’t be so lucky.
One facet of the plot is the prominent focus on money and the destructive effects that greed can have. Money drives all the antagonists in various ways in contrast to the themes of friendship and loyalty that drives the protagonists. Interestingly, this theme is all the more potent with recent recessions, COVID, and economic pressures faced by many while those at the top gain ever more.