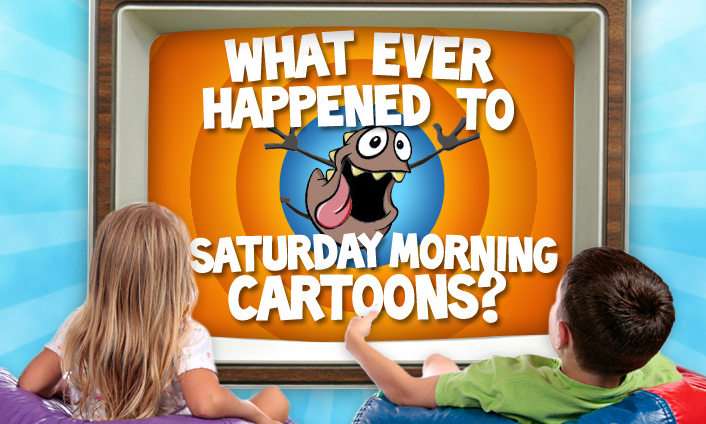 New animators who are looking to get into 2D animation often get inspiration from classic cartoons. Even if they were simplistic, Saturday morning cartoons followed the same basic principles of animation as any other style. At Animation Mentor, we use those same principles to teach the basics of 2D animation in our workshop dedicated to 2D Animation for Beginners or if you are a 3D artist looking to add a bit of exaggeration to your 3D characters check out workshop on Cartoony Animation for 3D animators.
Even as Saturday morning cartoons became enshrined as a quintessential hallmark of American childhood, by the end of the 1980s their iconic status was steadily eroding as animation began to change. These changes included the rise of cable television and channels such as Nickelodeon and the Cartoon Network, which aired cartoons not just on Saturdays but around the clock, and undermined the special time slot of Saturday morning as “cartoon time.”

This, coupled with the rise of home video and the easy availability of syndicated cartoons such as Transformers, Robotech and He-Man, would provide less incentive for broadcast networks (aside from public television) not only to develop cartoons, but to also maintain Saturday mornings as the time for such programming. Instead, networks shifted such programming to the after school time slot, stopped airing cartoons altogether, or relied on local affiliates to deal with children’s programming.

The Decline of Saturday Morning Cartoons

While other types of drawn characters could be found during this era in different media such as comic books, comic strips, and theatrical releases (particularly Walt Disney films), Saturday morning cartoons were certainly the most readily accessible for the majority of would-be animators.

In 1955, CBS introduced Mighty Mouse Playhouse, one of the first Saturday morning cartoons in full color.

Over the years, the industry has expanded to include other types of animation besides cartoons: VFX, feature animated series (Rick and Morty, F is for Family), video game adaptations, animated series exclusive to streaming services (Netflix) and online web series have all become crucial parts of an industry that started out exclusively on TV.
We can’t talk about the history of Saturday morning cartoons without briefly touching on the history of Television. There were two main elements in TV history that helped cartoons flourish: Firstly, in the ‘50s televisions became more affordable so most households had one. And secondly, color TVs came on the market which made watching animation more fun.

This action, combined with the later U.S. Federal Communications Commission (FCC) requirements that broadcast networks air at least three hours of E/I programming a week, guaranteed the end of Saturday morning cartoons since the vast majority of people dismissed them as non-educational. These requirements were loosely enforced, and increasingly networks substituted live action shows such as Saved by the Bell to address the requirements of children’s programming. This trend has continued thanks to the current popularity of shows such as Infinity Train, Adventure Time, Kipo and the Age of Wonderbeasts, and Steven Universe.

Emmy-nominated cartoonist Richard Pursel, whose credits include The Ren and Stimpy Show, Cow and Chicken, and SpongeBob SquarePants recalls that he was “obsessed with Saturday morning cartoons.” He points out that watching and being able to reproduce low-tech pencil drawn cartoons was crucial, because “a kid can immediately copy and doodle it,making him/her invested in the artistic process of it by becoming a fan. Everyone can copy a drawing of SpongeBob or characters from The Simpsons, even if they say they can’t draw.”

McGowan is still nostalgic about the disappearance of Saturday morning cartoons. “I do know that as a kid, I steered pretty clear of anything educational and could smell it coming a mile away,” McGowan said. “The stench of educational programming couldn’t be disguised by Mr. Wizard’s awkward way with children or the miserably forced wackiness of Beakman’s World. There was a time and a place for everything. Education was meant for weekdays. Give me Looney Tunes. Give me the Laff-A-Lympics!”
As it has evolved, animation is no longer viewed merely as entertainment just for children. Many cartoons such as Bojack Horseman, Family Guy, South Park and Bob’s Burgers cater specifically to adult audiences, and have been enormously successful in primetime slots both on cable and on the broadcast networks.

New animators who are looking to get into 2D animation often get inspiration from classic cartoons.

Storyboard artist and animation director Darin McGowan, whose credits include The Wild Thornberrys, Rugrats, and HiHi PuffyAmiYumi, is also optimistic about the future of children’s animation especially because of its constant evolution. “The future of kid’s animation is always going to be bright—the mocap [motion capture] thing makes things really easy and if we’re lucky, the quality will be good.”

For the majority of adults in their 30s, 40s, and 50s today, Saturday morning cartoon time was sacrosanct when they were kids. If you had siblings, the politics of what to watch were carefully negotiated the night before. Robed in pajamas and fueled by sugary cereal, Saturday mornings served as a magical moment in an otherwise adult-dominated television world where kids were recognized. It was the lead into the weekend and was bookended by the invariable feel-good family television show on Sunday night that included Ma and Pa Ingalls surviving on the prairie or the heroic antics of a lovable mutt named Benji.
The ‘70s proved to be the pinnacle of Saturday morning cartoons. Scooby-Doo became one of the most iconic cartoons in the history of television and the adventures of Batman quickly found their way into TV, solidifying the character not only as a Comic-book classic but also a Saturday morning favorite. Speed Racer, The Pink Panther, The Tom & Jerry Show, and Fat Albert joined the Saturday morning lineup.

Even as Saturday morning cartoons became enshrined as a quintessential hallmark of American childhood, by the end of the 1980s their iconic status was steadily eroding.

What’s Next for Cartoons?

However, the steady growth of children’s cable television and access to streaming platforms with cartoons has allowed for a much larger market for children’s animation. Networks such as Nickelodeon and the Cartoon Network, while airing older animated programming, are also generating enormous demand for new animated shows. In 2019 the Global Animation industry was valued at 264 billion dollars.
Other favorite ‘60s cartoons include, The Jetsons, Popeye the Sailor, Rocky and Bullwinkle, Underdog, Atom Ant, Yogi Bear, and Huckleberry Hound, to name a few.

Unfortunately, after the 1970s Saturday morning cartoons started to decline. From today’s vantage point, the more cynical of us would clearly point out that Saturday morning was largely an infomercial for toymakers and other companies, who increasingly in the 1970s and 1980s viewed children’s programming as an advertising goldmine. This was a significant departure from the way broadcast networks historically understood children’s programming: as an afterthought.
Start your animation journey by learning with professional animators from a variety of studios and career paths! Get more information about Animation Mentor’s Character Animation Courses and hear stories from students who have gone on to get their dream jobs.

Animator Robert Goodin, who currently works on Family Guy, points out that children are not lost in this formulation and in fact networks are looking for animation that caters to the whole family. “The one thing I know is that Fox wants shows centered around families.” This expansion of cartoons to a larger age demographic is certainly a positive development since it opens up family animation as a thriving avenue for new programming. 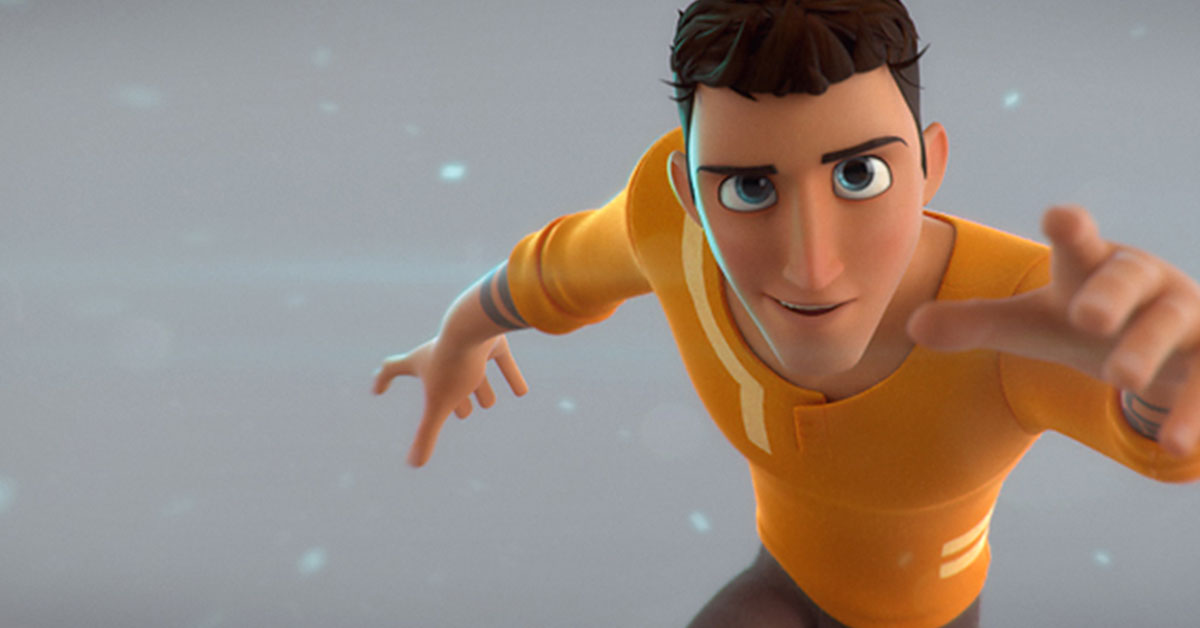 Want to learn from professional animators?
In 1966, Bugs Bunny made his way onto Saturday morning TV screens and instantly became an icon with his witty jokes and the show’s over-the-top, exaggerated animation style.

In 1960, The Flintstones aired for the first time and had a hugely successful run that lasted 6 years.